This morning we were treated to glassy calm seas and just a bit of a swell left over from yesterday’s wind. Minke whales were abundant throughout the trip with at least 9-10 seen!  A couple were quite close to our boat, showing us their “minke mittens”, the white patches on the flippers. 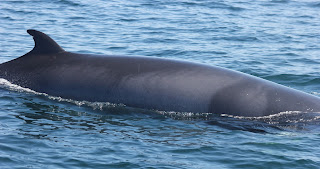 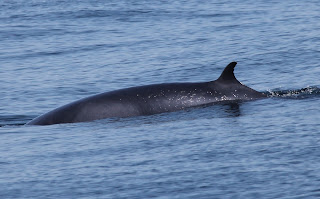 We continued to find a fin whale who was on the move, but at one point spent about a minute about 200 feet below the boat. Normally we don’t know where whales are once they slip beneath the waves, but our depth sounder was showing that the whale was under us as we moved slowly in the direction it was traveling in. Really neat! 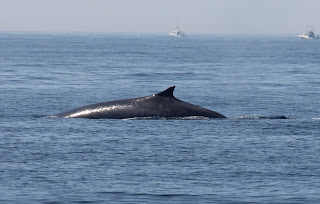 Next we found a humpback whale. This whale, named Owl, hadn’t been seen around  here  since the spring. Welcome back, Owl! This large female also decided to show us her friendly side. As we were shut down waiting for her to resurface, she came up right behind the boat and then circled the boat close by! The ocean was so calm that we could see all of her underwater. So amazing, and definitely gave us an appreciation for her size.


Finally, we found humpback whales, Pinball and her calf, in about the same area where they have been spending time this week.  The pair surfaced right in front of the boat as we were waiting for them. Definitely a trip filled with curious whales!!

This afternoon, a little sea breeze cooled things off just a little for us.  We  cruised by the Isles of Shoals and then did a little exploring of areas we hadn’t seen during our morning trip before heading back to where we had Owl, Pinball and her calf earlier.

Owl was seen first and she was sticking around the area. We shut down the boat and again, she surfaced twice close to our stern and swam right by us!  She must have missed us! (joking of course).


Then we found Pinball and her calf. This calf is one wiggly little whale! Many times the calf leapt out of the water, near our boat, and then would tail-breach and flipper slap, all before showing us how it is practicing feeding techniques. So cute!


This was really a remarkable trip with so many views of the calf out of the water!  Minke whales were around as well, but we don’t know where our fin whale friends have moved to.  We hope the weekend continues to be phenomenal!
Posted by Dianna Schulte, Blue Ocean Society Director of Research at 9:42 PM