Whales have been surprising us recently, whether showing up or disappearing! We aren't joking when we say, "we have no idea what we are going see once we leave the harbor." That rings true for each trip we venture out into the Gulf of Maine for search for wildlife. As whales move in (or out!) of an area we react to recent sightings and check out areas where whales may be. Monday was no exception. In the morning, we started the day with a group of ~80 Atlantic white-sided dolphins.

These toothed whales were following a fishing vessel, looking more like boat wake (from a distance) than dolphins. Once on Jeffreys Ledge, we ended up finding eight humpback whales.

Some were familiar whales, while others were new visitors to the area this season; even a fin whale made a quick appearance in the distance. Known whales included Mogul, Dross, Valley, Etch-A-Sketch, Pinball, Satula, Pitcher, and Pixar. On Monday afternoon, our sightings consisted of even OTHER individuals. This time we checked out humpback whales Dross, Satula, Wyoming, Valley, and Quote and her calf.

And once again, a fin whale surfaced for a brief glance. There were even a few small pods of Atlantic white-sided dolphins as we traveled along. 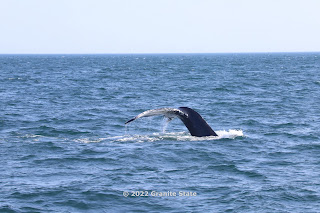 The weather held off long enough for us to get a trip in Tuesday morning, but no trip in the afternoon. Baleen whales were plenty with numerous minke whales, three fin whales, and four humpback whales. Whales were busy circling around the boat, allowing us to get great looks at all the different species. Known humpback whales included Satula, A-Plus and Mostaza. 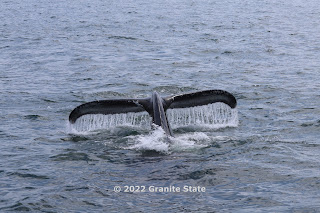 There was such a variety of marine life on Saturday. In the morning, we started in an area where three minke whales were moseying around.

A blue shark even made a brief appearance. Further offshore, we came across a pod of 200 Atlantic white-sided dolphins!

In the pristine conditions, it was breathtaking to watch these toothed whales move through the water. Later in the trip, we found two basking sharks and even an ocean sunfish.

Basking sharks have been infrequent sightings in recent years, so seeing two in one trip was quite the surprise!

In the afternoon, our first sighting was an ocean sunfish, followed by a minke whale.

We even found a pod of dolphins, but this time it was a group of four. How different a few matter of hours can be between our movements and the whales. Life to look at, and each trip providing such unique moments!

The day started on Sunday with a pod of Atlantic white-sided dolphins. This group was cruising through the water at a pretty good clip. Turns out, we ended up finding two pods during our journey offshore. We also spent time with Satula the humpback whale. This whale has been sporadically showing itself over the past few weeks, a sight we always enjoy. On our afternoon travels we attempted to check out a minke whale before Mother Nature had other plans. Needless to say, we got wet. I mean a good soaking kind-of-wet. After our "fresh water rinse," we spent time watching Satula, still circling around, even creating a few bubble clouds. 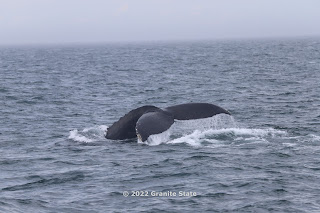 On Thursday, the air offshore was cool and inviting, a welcome change from the heat wave we have been experiencing. We started our trip with a large ocean sunfish. The water was quite turbid due to the high winds, but we were still able to get some great looks at this unusual fish. 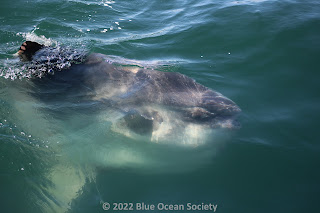 We had to travel for a bit before finding our next animals, but it was worth the wait as it turned out to be a pod of about 120 Atlantic white-sided dolphins! This group was very active, darting all around the boat near and far. There were several calves in the pod as well. We were surrounded! We also spotted a minke whale on our way back to the harbor. 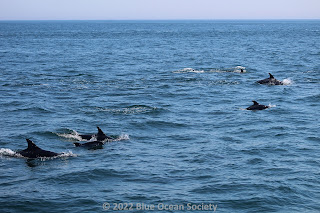 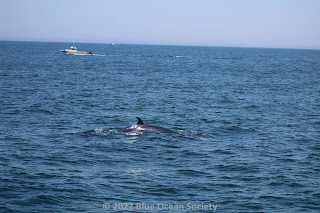 The afternoon trip was also a nice relief from the heat, and the winds had even picked up a bit (great for the many sailboats we saw!). We searched and search for whales, but they were being very elusive this afternoon. The rough seas also didn’t help with our sighting efforts, but we were able to find a minke whale before it was time to head home. 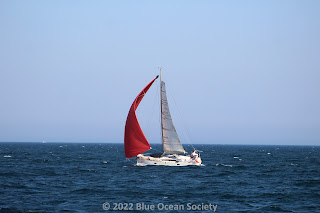 This morning’s whale watch was one for the books, but not in a good way. We found an entangled minke whale with rope through its mouth, over its back, and a big snarl on its side. This is our nightmare. We never want to see the whales that we cherish suffering in pain.  We immediately called our friends at the Center for Coastal Studies in Provincetown, MA, who are trained to disentangle large whales. They arrived on the scene a few hours later, but unfortunately, the boat that was standing by the whale lost track of it. Minke whales are notoriously hard to keep track of, even on a good day. The CCS team searched the area, but the whale wasn’t found. We hope it is seen again so it can get the help it desperately needs!

After we handed off the minke whale to another boat to babysit, we continued to search for more marine life. We found a large pod of Atlantic white-sided dolphins, which perked everyone up after watching the stress of watching an entangled whale. 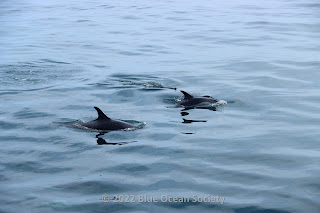 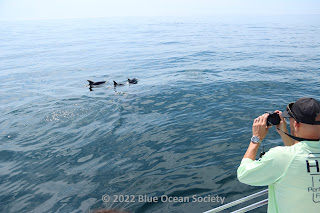 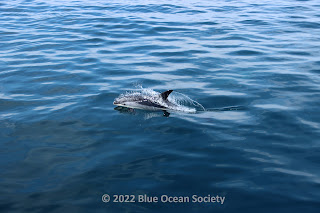 We also found an ocean sunfish and a shark of unknown species in addition to several harbor seals and pods of harbor porpoises!

The afternoon trip was still glass-calm and absolutely beautiful. The predicted thunderstorms wound up just being a trickle of rain, so we were grateful for that! We started our day with a few harbor seals and a gray seal. Then, our deckhand Matt spotted something very special: a Kemp’s Ridley sea turtle! These are the smallest and most endangered species of sea turtle and are not typically found in the Gulf of Maine. Matt just happened to be looking in the right place at the right time! This animal was probably only a foot across and was a little hard to keep track of, but we were able to watch it for quite some time.

We came across three minke whales. Our first was taking longer dives, but the second two were near each other and took turns surfacing. We got some great looks as they came closer to the boat a couple of times. We continued on and were surprised by another special species: a basking shark! These are the second largest shark species, and lately, we haven’t been seeing them as much. This was our second for 2022. What a treat!

Our day of unique sightings wasn’t over yet, as we spotted some splashing ahead of us on the way home. This turned out to be a pod of about 75 Atlantic white-sided dolphins, which we only see on about 20% of our trips. There were calves in this pod as well. Our trip wrapped up with an appearance by a blue shark. What a great way to start the weekend!

We had picture-perfect weather this morning with glassy seas and visibility galore. Heading to where the humpbacks have been seen lately, we expected them to be right where we left them. Nope. Today, wildlife kept us humble. We struggled to find large whales throughout the trip. A few pods of harbor porpoises darted around but were shy. Some ocean sunfish were seen soaking up the sun’s energy as they hovered at the surface. 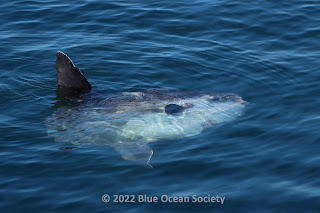 Eventually, after a lot of searching, a pod of Atlantic white-sided dolphins showed up! With the beautiful conditions, these dolphins were a sight for strained eyes! We could see them underwater right alongside the boat, and even watched them turn on their side to look up at us! Marvelous!! 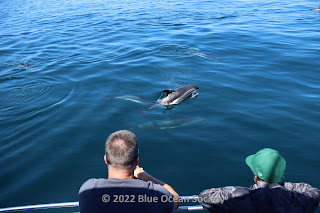 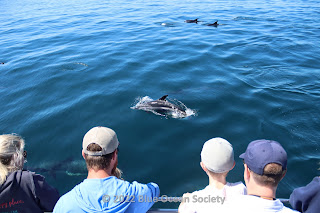 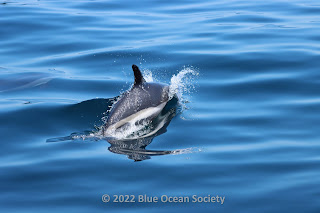 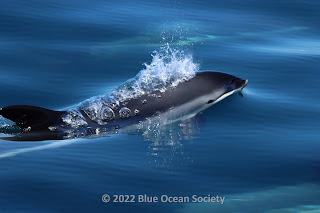 Our trip home brought us across a different area where we ran into a few minke whales! Two of these gave us close looks, showing us just how different two whales of the same species can look. 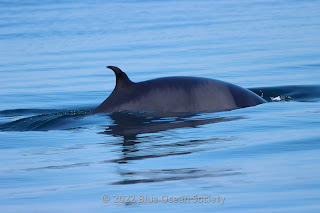 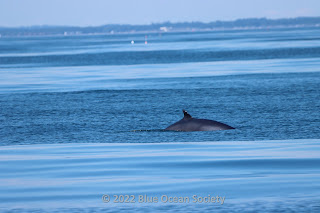 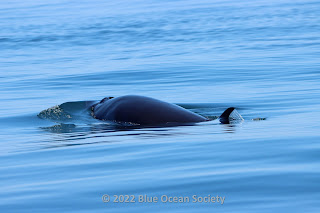 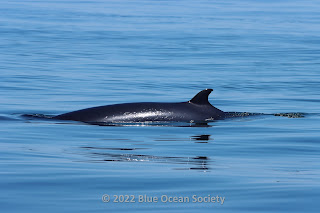 This afternoon, a minke whale eluded our cameras as we tried to get some looks at it. Some harbor porpoises surfaced in the area but were also elusive. We heard of a pair of humpback whales on a different area of the ledge.  Upon arrival, we were pleased to find Spoon and her calf! They were far from where we had last seen them, but whales do move around a lot!! 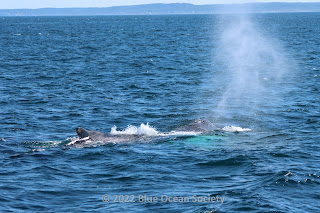 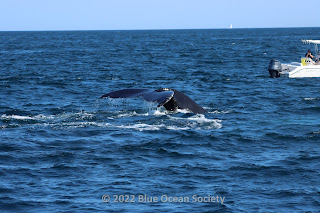 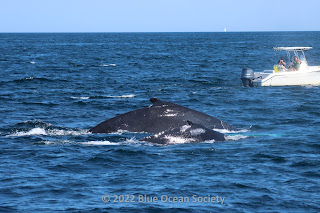 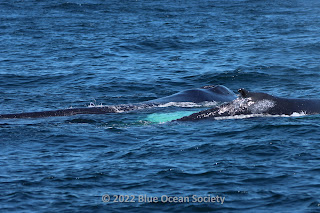 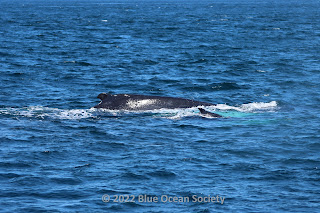 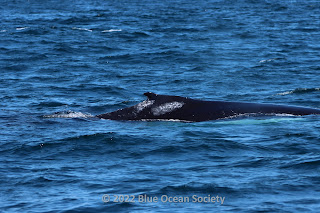 The pair was slowly traveling in a consistent direction, making easy work of keeping pace with them.

We saw more harbor porpoises on our trip back to the harbor.