Recent trips have provided plenty of wildlife. On both the morning and afternoon trips on Monday we checked out multiple fin whales and humpback whales. The fin whales were spending long periods of time under the water and sleekly surfacing in all different directions.
There were seven fin whales, four humpback whales (Clamp, Spoon, Patches and Nike) and, after almost an entire month, a pod of Atlantic white-sided dolphins.
Birds were scouring the skies from above working a few patches of areas near the whales.
The afternoon managed to compile of similar sights we saw during the morning trip but timing couldn't have been better. After checking out Zorro the humpback whale we found ourselves literally surrounded by whales. The whales move to where the fish are and apparently we were in the right spot! Fin whales were surfacing all around, some close, some out in the distance.
Humpback whales were forming associations with each other, lunging through the water occasionally, while the birds were at the ready to snatch up any scraps left behind.

At least 10 fin whales were around (including a group of four!) Patches, Nike and Clamp the humpback whales were swimming in circles and a pod of Atlantic white-sided dolphins went through the middle of all the activity. It was whale-pandemonium!
Tuesday morning was full of fin whales. We saw eight in total! There were also lots of shearwaters with a grand slam of species! We even wrapped up the trip with a small pod of Atlantic white-sided dolphins.
On the afternoon trip we headed to similar areas and found slightly different whales. First we found an ocean sunfish on our way offshore.
Zorro the humpback whale was spotted and then we spent time with Clamp and Nike the humpback whales before checking out a pair of fin whales.
A third fin whale was in the area while the pair was busy circling around getting some great looks at these large, sometimes feeding, whales!
Even when you think sightings couldn't provide more of their own excitement, they do! On Wednesday morning the trip started with an ocean sunfish. It breached! Everything likes to "fly" 😊
We then saw two different humpback whales and four fin whales. Clamp and Nike were being active at the surface, and even in the distance, these behaviors were impressive to see.
We spent most of our time while watching fin whales with a pair, lunging through the water, feeding on occasion.
During the afternoon we saw four fin whales and again checked out a pair. This pair would lunge through the water every few surfacings as we got some incredible looks as they circled all around us! 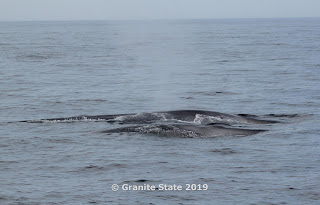 Whales are wild animals and while we anticipate their presence in our area every day we leave the harbor to the unknown. The unknown of what we might see, what species might be around, what behaviors the whales have in store for us. The only known is to expect the unexpected. Whales move (and they do!) so while a few have consistently been in our area, that definitely does not mean they are just waiting for us in the same spot they were the day, the hour, or even just minutes before! We are so fortunate to have these wild creatures spending time off the coast and our trips continue to provide some incredible memories. On Saturday morning we attempted to check out two minke whales we spotted, spent time with two different fin whales and then wrapped up the day with two humpback whales: Pinball and her 2019 calf.
On the afternoon trip we checked out some different areas and ended up seeing six humpback whales and a pair of fin whales. All of the humpback whales we spotted were actively feeding at the surface. Sometimes they were independent of each other and other times sighted in pairs and even a trio. These whales included Zorro, Clamp, Nike, Spoon and Patches.

On Sunday, the ocean was wavy from the wind which steadily remained as the day worn on. The morning trip brought 10 fin whales and two humpback whale sightings. Most of the fin whales were in pairs, but staying under the water longer than hoped, and darting around in every which direction. A few of these massive mammals were lunge feeding charging through the waves with such ease.
We also spent time with humpback whales Zorro and Patches.
To our surprise we even witnessed a few breaches by Patches at the end of the trip.
On top of all the whale activity, we also had a grand slam of shearwaters: Great, Sooty, Cory's and Manx! There was even a jaeger that flew by.
The wind persisted into the afternoon and with that the waves also continued. We first came across Zorro the humpback whale.
While watching this whale, out of the blue, this whale came out of the blue! Zorro breached only once but if you were looking in the right place, at the right time, it was quite the sight. A breach on both trips; wow. We also saw an ocean sunfish, harbor seal and a minke whale.

Thursday morning, we headed out to Jeffreys Ledge to the area where we left some whales on Wednesday afternoon. As always, things had moved around a bit but we eventually found a number of huge fin whales! The first one was lunging at the surface, catching small mackerel.  Surrounding this feeding fin whale were dozens of shearwaters and bluefin tuna!  It was a crazy feeding frenzy!  From here, we saw more blows in the distance. More fin whales, birds and tuna!


On our way home we passed by a minke whale and then found a humpback whale relatively close to shore! To our surprise, this humpback whale, named Zorro, was blowing bubble clouds to corral his prey and charging up through the cloud to catch the mackerel trapped within the cloud. Quite spectacular! If that wasn’t good enough, Zorro then surfaced right next to the boat and even hung out alongside us for several breaths.

Even after 25 years of watching whales, I am still amazed by the calmness and curiosity of these huge animals.

Thursday afternoon, we found Zorro again just south of the Isles of Shoals. He was wiggly at first but then settled down and did more bubble feeding!


Venturing offshore, we found at least half dozen fin whales likely more!  Some were in pairs while others were single. Fin whales are the 2nd largest species of whale and they rarely disappoint.

We even had a tiny hummingbird visit us on this trip- likely blown offshore and looking for a dry place to rest.

Friday morning’s trip was an exercise in patience and also conservation. We received a report of a whale just off Hampton Harbor. We went south to investigate. For the past couple of years, we have been seeing juvenile whales close to shore, between Rye, NH and Plum Island, MA so this wasn’t a complete surprise to have a whale just a few miles off the beach. Upon arrival, we found a young humpback whale virtually sleeping! It surfaced, logged (floated) at the surface for 5-10 minutes, breathing occasionally, and then diving for a few minutes before repeating the logging behavior. Logging is a humpback whale’s way of sleeping. They are never completely asleep like we are, but instead rest half of their brain at a time so they are always partially conscious, knowing when their blowholes are above the water to take a breath! Pretty ingenious! Nonetheless, we got great looks as we drifted along with the sleeping whale. This individual had obvious healed scars from a small boat collision in its past. Fortunately, this whale survived. 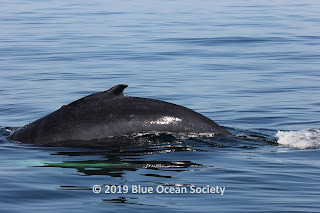 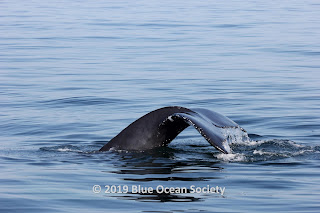 We then heard a report of another whale even closer to shore off the Merrimack River. A fin whale was also basically sleeping in amongst all the boat traffic and lobster trap gear. That’s a pretty poor choice in habitat for a whale to take a nap! Boat strikes and entanglements are two of the leading causes of death for whales!  As we left, the fin whale started moving out to the southeast away from all of the mayhem.

Further offshore, we tried looking at a couple of minke whales that were being on the elusive side. Eventually we found a rather friendly one! It came up right next to the boat, displaying its entanglement scars on its flukes! Two thick vertical white lines (scars) ran down the length on each of the flukes, indicative of a prior entanglement. Minke whales are rather susceptible to drowning from entanglements because they are too small to break free from the gear. Luckily for this whale, it persevered!

Just before we made our approach for Rye Harbor, we spotted another minke whale. We were just pointing it out, passing by it when we realized it was “Finke” (finless-minke). This whale has been seen since 2011 when it first lost its fin due to a boat collision. We have been monitoring Finke annually since its first sighting, watching the injury heal over time. We weren’t able to get any photos of Finke since this whale is understandably shy around boats, but great to see that it is back for another year!

Friday afternoon, we heard reports of a whale close to shore just south of the Merrimack River. We decided that it was likely one of the close-to-shore whales we had on our morning trip and instead headed to the southern end of Jeffreys Ledge, just off of the tip of Cape Ann.  We passed some elusive whales on our way and there we found at least 4 if not 5 humpback whales, a minke whale and harbor seal. The pair of whales we spent most of our time with was our friend Pinball and her 8th calf!! She and her calf have been moving around quite a bit this summer so we were excited to see her again!


The calf checked us out a couple of times while Pinball was taking longer dives. We even saw what appeared to be nursing behavior from the calf!  One of the whales on the outskirts was Satula! Both Pinball and Satula are adoptable through the Blue Ocean Society!