We spent time with multiple humpback whales today. In total, there were 7 of these whales around! We first started with a pair, Patches and Geometry, creating bubble clouds and open-mouth feeding multiple times.
Our next sighting was a group of FOUR humpback whales. Spoon, Jabiru, Pinball and Gunslinger were surfacing side by side each other.
We also spotted a single humpback whale on our travels home. As the holiday weekend approaches we will see what the whales have in store for us on our next trip out.
Posted by Melanie White, Granite State Naturalist/Deckhand and Blue Ocean Society Research Associate at 9:26 PM No comments:


Today we had a group of hearty passengers who braved the waves and were rewarded with great looks at a total of six humpback whales!   We also saw a blue shark and a harbor seal during our trip.  The first group of four humpback whales included Spoon and Jabiru along with two friends who have not yet been identified.  These whales were very relaxed and spending a good deal of time at the surface. The second group we came upon was a pair of humpback whales.  We are fairly sure that one of the pair was Hornbill, but the whale did not lift its flukes to confirm this.  This pair was also very relaxed.  In addition to all the whales we also saw many great shearwaters and gulls and a few gannets.  Here are my favorite pictures from today's trip. 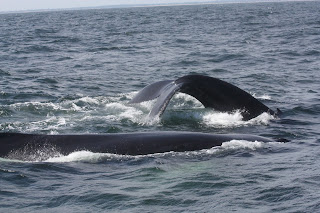 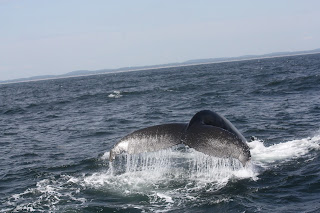 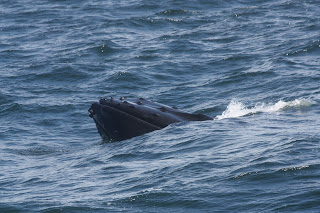 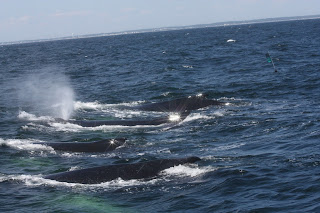 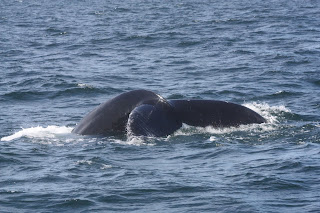 Today we spent time with some very relaxed whales. Almost all of our sightings were resting at the surface. In total, we saw 6 humpback whales, a minke whale and even a couple of grey seals. Our trip started with a group of 4 humpback whales mostly napping: Spoon, Jabiru, Pinball and Gunslinger.
Because these whales remained at the surface for such long periods of times we got some phenomenal looks at this group.
During the time we spent with these wild beings there were a few moments of extra activity as Spoon flipper slapped and Pinball smacked her tail at the surface creating quite the whitewater nearby.
Next we checked out Patches the humpback whale slowly moving around on its own.
We also saw a few grey seals pop up here and there and even a minke whale on our way home. A great day with some incredible mammals.

We had a variety of life to check out today. The trip started in an area where we had three different minke whales but we didn't stay long for there was a large amount of whitewater being seen in the distance. Hornbill the humpback whale was tail breaching and lob-tailing multiple times at the surface.
In total we saw 7 humpback whales! Hornbill became associated with Pinball the humpback whale; both Blue Ocean Society adoptable whales!
One of the other whales we spent time with today was Patches the humpback whale as another humpback whale passed by us out in the distance.
As we spent time with Patches we even got a quick look at an ocean sunfish.
The next sighting we had was a trio of humpback whales: Spoon, Jabiru and Gunslinger.
We ended the day with a pod of 50 Atlantic white-sided dolphins. So much to check out in the inshore waters of Jeffreys Ledge today! 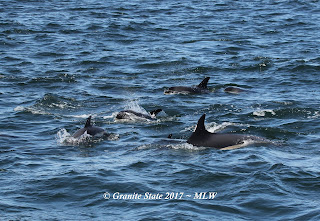 How is it already the last week of August? Time certainly flies by when it comes to searching for marine life offshore. This morning we saw 4 humpback whales and a minke whale. This afternoon we saw 3 minke whales, 1 fin whale and 3 humpback whales. To round it all out we also saw multiple pods of harbor porpoise during both of our trips. This morning we started with humpback whales Springboard and her 2017 calf. The calf rolled around a bit as they both were on the move through the area.
We moved on and found another pair of humpback whales. Geometry was seen with a new visitor to the area this year, a VERY familiar whale, Patches! So exciting to see the whale that is on the front of our brochure spending time in our area.
This afternoon we attempted to check out multiple minke whales before finding Comet the fin whale. We last saw this whale 11 days ago and nowhere near the location it was in today. Wildlife, always on the move.
We then found Patches still moving around.
The day ended with surprise spouts from whales on our way home. It was another pair of humpback whales: Spoon and Jabiru!

Beautiful ocean conditions made witnessing marine life that much more enjoyable on both of our trips today. This morning our first stop was on a pod of ~100 Atlantic white-sided dolphins just beyond the Isles of Shoals.
These whales were being followed by a large grouping of sea birds, mostly Northern Gannets, assessing the situation from above read to react to any fish that caught their eye. Eventually, we pressed on offshore and, thanks to our fishing friends(!), came across 3 fin whales.
These whales were all circling around the area. Two of these whales even became associated with each other as we watched these enormous creatures maneuver around.
This afternoon we spotted 2 ocean sunfish and a large pod of dolphins once again! This pod of ~100 Atlantic white-sided dolphins were slowly on the move.
After a bit more searching we headed to a pair of humpback whales that were nearby. This pair was a mother/calf pair and a new pair to our area for the season. Springboard and calf were swimming around. What a fun surprise!
After some nice looks at these whales we found our same group of dolphins before heading back toward home. It was another fun-filled day of whales in the Gulf of Maine.
Posted by Melanie White, Granite State Naturalist/Deckhand and Blue Ocean Society Research Associate at 10:54 PM No comments:


This morning we passed by a few pods of harbor porpoises on our way offshore.  Then we spotted a couple of blows. The whale closest to us was a fin whale doing some sub-surface traveling, meaning it was coming up for a single breath every few minutes. At one point we could see it just below the surface, passing behind the boat before it eventually came up for a breath! Next, we found a pod of Atlantic white sided dolphins- maybe about 40 of them- in glassy calm water!  Several minke whales were spotted but we only managed to get decent looks at two of them. We found a second pod of dolphins and another minke whale before heading home.

This afternoon, we also found a couple pods of dolphins along with a minke whale and finally a huge fin whale! This fin whale was only staying down for 6 minutes and at one point came up right next to the boat!  Pelagic birds were also in abundance on both trips including hundreds of northern gannets, a few great shearwaters, Wilson’s storm petrels and even a flock of 10 red-necked phalaropes!
Posted by Dianna Schulte, Blue Ocean Society Director of Research at 9:18 PM No comments:

Marine life continued to be present on both of our trips today. This morning we saw 7 minke whales, pods of 100, 150 and 50 Atlantic white-sided dolphins, 10 harbor seals and an ocean sunfish.

The minke whales were here and there and we even had one briefly swim circles around us; one mammal being curious about another.
This afternoon we started the trip with a group of 50-60 Atlantic white-sided dolphins before finding 3 minke whales, 4 fin whales, 3 harbor seals and a super brief look at a humpback whale.
One of our fin whales was a very familiar whale. Dingle the fin whale surprised us by surfacing nearby! Another day of surprises here and there and fun finds all around.