Happy Fall all! The weather kept us on solid land most of this week so, it certainly felt great to get back on the water on Saturday. While a leftover swell was waiting for us, minimal wind and a crisp horizon added to the energy of goodness in the open salt air. A total of nine humpback whales and a small pod of Atlantic white-sided dolphins were seen. The humpback whales continued to be associated with each other in pairs and trios.

Many of the same culprits continue to be in our area, which we are very grateful for. Individuals included Shuffleboard, Pixar, Partition, Fan and her calf, Sword, Frost, Clamp, and Mogul. 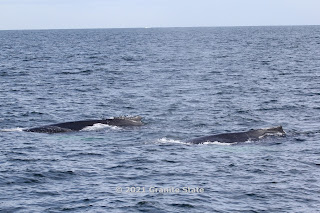 On Sunday, humpback whale sightings continued. Behaviors included some whales napping, others creating bubble clouds, and even pooping (yep, they must rid themselves of digested food just like humans!). We started with Shuffleboard, Jabiru, and Quill while Mogul moved into the area. The day wrapped up with Partition and Pixar. 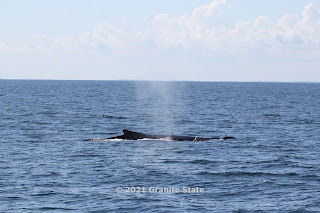 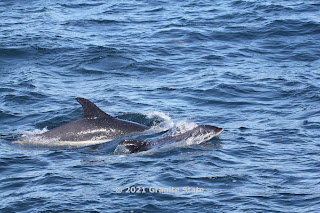 Saturday was a beautiful afternoon for watching whales (and dolphins and ocean sunfish). The morning breeze faded, leaving us with an ocean swell but otherwise calm seas.

Heading offshore, we found a pair of ocean sunfish, also known by their Latin name, Mola mola, which translates into millstone- a large round grey rough object used to grind grains.

Next, we saw a fishing boat heading in from its charter and noticed they stopped abruptly. We called them to ask why they stopped, and we learned the boat found a pod of dolphins! We headed that way and relocated the large pod of Atlantic white-sided dolphins! These animals were fantastic, swimming closely alongside our boat, allowing us to check out their cool stripes. We also found another ocean sunfish amid the dolphins! 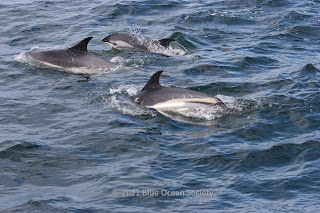 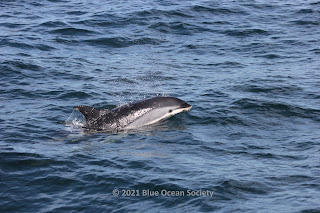 Heading east, we came upon an area where five humpback whales were hanging out. Owl was by herself today and doing a bit of napping at the surface between dives. 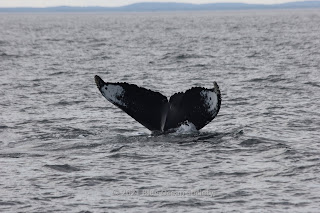 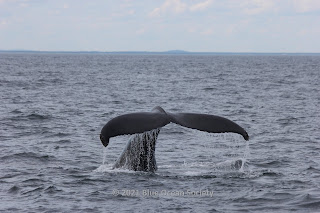 Two pairs of humpbacks were in the distance. The first was Nile and Scylla, a pair that has been together for the better part of two months (maybe more). 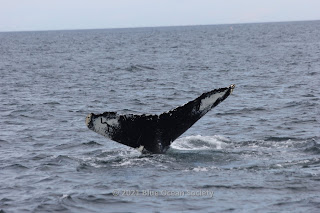 Then in the distance, we saw the other pair start to become active by tail breaching and slapping.  We normally don’t rush over the active whales when we are watching other whales since we know that the whales will stop their activities by the time we get there, but we were temped. 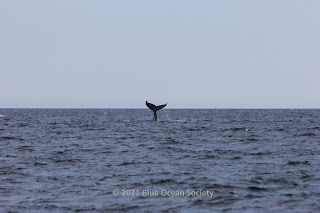 We idled their way and soon determined we were looking at Ebony, who was doing most of the tail-slapping, and Brine.  As we watched the activity, we noticed that Nile began to tail-slap as well! Likely a form of communication, tail-slapping, and tail-breaching are known behaviors for humpback whales, but not for most other species of large whales.

Sunday, the ocean looked a little different as the SW wind blew steadily, creating some choppy seas.  The starboard side of the boat got pretty wet as we headed out to where we found whales yesterday.  Fortunately, we found a pair of humpback whales not that far away. Nile and Scylla are still hanging out together! These two were slowly heading toward Cape Ann and staying underwater for around 8-9 minutes. 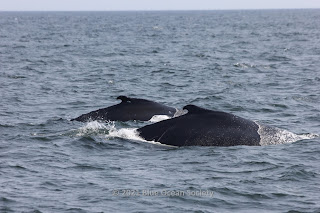 At one point, we looked over at our fish finder to see two huge "fish" below us! Nile and Scylla were directly below the boat! 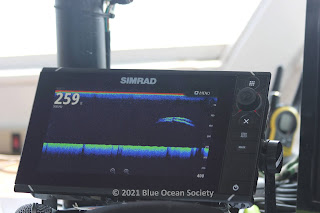 We said goodbye to the pair and started to make our way back to Rye but decided to take the long way home. Our intern, Tiffany, spotted an ocean sunfish that turned out to be exceptionally cooperative giving both sides of the boat incredible looks! Ocean sunfish are odd-looking creatures, and we love to show our guests onboard another form of marine life! 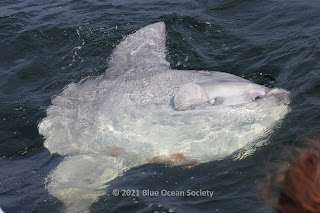 The ocean greeted us with a large swell after keeping us ashore since Monday, but we braved the conditions and headed out to find whales! Our first encounter was with an ocean sunfish or Mola mola. After spending some time with the fish, we got a quick peek at a harbor seal before finding our first pair of humpback whales. While these two were under the surface, another pair began breaching and flipper slapping in the distance, so we headed over to visit them. This pair turned out to be Frost and Brine (one of Salt’s calves!). Thankfully they were still flipper slapping as we arrived!


We noticed some splashing in the distance after a few dives from these two, so we went over to that area and found a HUGE pod of Atlantic white-sided dolphins! There were about 100 in this pod, including a few calves!

After enjoying our time with the dolphins, we headed back to our original pair of humpbacks, who we were able to identify as Sword and Shuffleboard. These two whales were busy finding food, and we spent a little time with a second (REALLY BIG) sunfish while our whales were below the surface. We got great looks at these whales before heading back to the harbor. What a great start to the weekend!

Here we are, Labor Day weekend! Where does the time go? We will be whale watching through Columbus Day weekend, so there is still time to join us on a trip this season. On Saturday morning, we spent time watching four humpback whales- Jabiru, her 2021 calf, Spoon and Chromosome.

Before getting back to the harbor, we even came across an ocean sunfish.

On Saturday afternoon, we started with an ocean sunfish before finding three humpback whales. This time our whale sightings included Owl, Spoon, and Chromosome.

Sunday provided more of the same. Whales to look at, moments to make, plenty to enjoy. During the morning trip, we had two pods of Atlantic white-sided dolphins! Both toothed-whale sightings were nursery pods. The first group was extremely mellow, and with glass-calm ocean conditions, it was gorgeous to watch these whales meander next to the boat.

A few ocean sunfish were scattered around offshore followed by our second pod of dolphins all before returning back to the harbor.

The afternoon trip started with an ocean sunfish before shifting gears to a pair of humpback whales.

Shuffleboard and Gunslinger decided to move into the area. We also saw Spoon, Chromosome, Owl, and Quill, almost all napping! 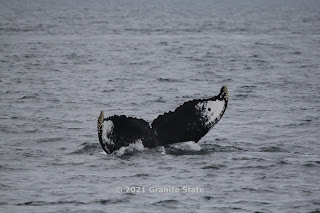 We only had one trip on Monday. The day started with our mellow pair of humpback whales consisting of Spoon and Chromosome. No complaints that these two whales continue to stick around! We got some beautiful looks as these whales napped at the surface. An inquisitive harbor seal even checked us out while we were offshore. The day rounded out with an ocean sunfish and a nursery pod of Atlantic white-sided dolphins. We are into our fall schedule, so while we will continue to whale watch, the frequency of our trips start to wind down. Hope you all had a safe and enjoyable holiday weekend! 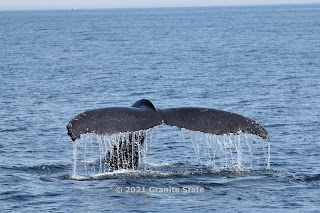