The fourth of July included sunny skies, calm winds, and stunning seas, a perfect combination to celebrate our independence day. In the morning, we had a variety of life with close looks at an ocean sunfish, a nursery pod of Atlantic white-sided dolphins, and a fin whale. This is only the second time all season we have come across dolphins!

The afternoon trip took us to a different part of Jeffreys Ledge where we checked out two humpback whales - Clamp and Dross.

On Tuesday, we were able to get a trip in before the forecasted weather was scheduled to flip upside down. We ventured to where we had luck with whales on Monday, but no luck. Surprising? Nope. Whales have been their unpredictable selves recently, which is what wild animals are capable of doing. This, of course, makes the job of finding where they are today (and the next, and the next...) what we do! We got the chance to spend time with two humpback whales, Clamp and Dross, in different spots than they were yesterday. Dross was even doing some bubble nets, a feeding mechanism used to catch and eat fish! 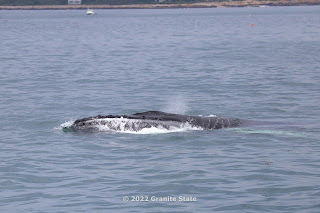 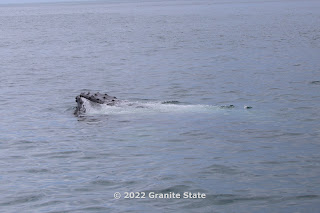 The weather caused us to pause on Saturday morning so we only had an afternoon trip. Thanks to our fellow whale-watching friends, we spent time with Clamp's 2016 calf. While the whale mostly meandered through the area, we did witness a few curious approaches by this wild whale. Such a unique individual and a moment never taken for granted.

We enjoyed just gorgeous conditions on Sunday - beautiful. On the morning trip our attempt to check out a fin whale was not fruitful, but we got some great looks at an ocean sunfish, Clamp's 2016 calf and even a minke whale moving through the area. On our afternoon trip, more whales moved in. We spent time with a pair of fin whales, Clamp's 2016 calf and guess what? Clamp herself! What a fun surprise to wrap up the day.
Posted by Melanie White, Granite State Naturalist/Deckhand and Blue Ocean Society Research Associate at 9:38 PM No comments:

This morning, we steamed north toward the area we had whales yesterday afternoon. We passed by a few harbor porpoises on the way before finding a minke whale. This “little” 25-foot whale surfaced frequently and was easy to see on the glassy calm seas. 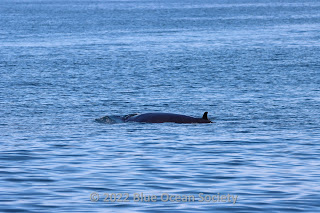 Continuing on, we saw a large, yellow balloon floating on the ocean. Marine debris (trash in the ocean) is a huge problem for marine life. Our crew was amazing once again, plucking this inflated piece of plastic out of the ocean.

Next, we spotted a humpback whale that appeared to be on the smaller side- possibly a juvenile. As we waited for it to resurface, we saw a small mark on our depth sounder, telling us that something was right below the boat. Sometimes these marks are tuna or schools of fish, and sometimes they are whales! I looked down into the water, hoping to see the glow of a humpback whale’s white flippers, but what I saw instead was a huge surprise. A 6-foot porbeagle shark was right next to the boat, and with those glassy calm seas, we could see the entire animal as if we were in an aquarium! Awesome! But then it got even better! The shark swam circles around the boat, rubbing up on the hull! Upon closer inspection, this shark had several lamprey eels attached, so we believe it was trying to knock off the parasitic fish. In over 25 years of whale watching, I’ve never seen anything like this! In the meantime, the humpback whale came back up but we decided to stay with the shark for as long as it would stay with us. After a long 6 minutes of shark-watching, our fishy friend left us, and we were back to whale-watching! 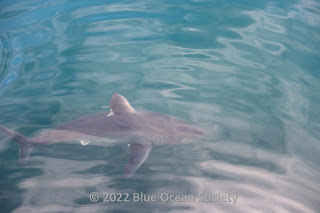 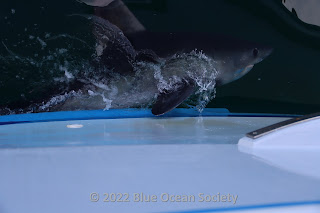 The small-ish humpback whale was tricky to find since it didn’t have a visible blow and was very stealthy at the surface. Eventually, the whale became more predictable and showed up close by. We finally saw its flukes and realized that we saw this same whale last Friday afternoon. We still don’t know who it is, so possibly a new whale for our catalog! 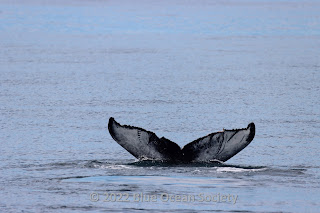 The afternoon trip was completely different from the morning. The wind picked up, so we lost the glassy seas. However, found three whales: one minke and two humpbacks! And better yet, the humpbacks were two of Blue Ocean Society's adoptable whales again!! Cool! The first was Pinball. She was moving around quite a bit but generally sticking around the area. 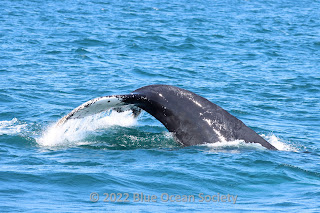 We moved on to check out other areas. In our travels, we found more balloons. This cluster was from a graduation party. Ugh. Please do not let balloons go! 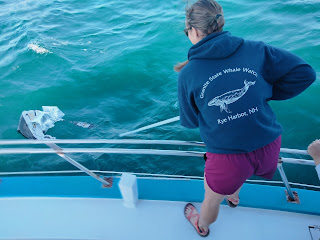 After a bit of searching, we found Satula! This humpback was feeding on fish near the bottom and blowing clouds of bubbles to corral his meal! At one point, he surprised us by coming up right next to our bow after being underwater for about 5 minutes! Whales always keep us on our toes! 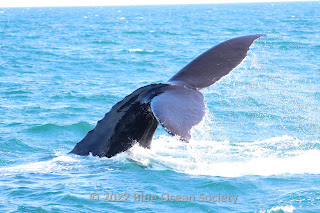 This morning greeted us with beautiful sea conditions and bright sunlight. It took a bit of searching, but eventually, we found Satula, the humpback whale. Satula was all over the place, always showing up in a different direction between dives. There was plenty of bait in the water, and Satula was busy feeding. He even created a bubble cloud at one point. He eventually gave passengers some great looks. While we were watching Satula, a fin whale also popped up nearby. We were able to get some quick looks at the second largest whale in the world. Eventually, Satula was joined by a second humpback whale, Pinball! Pinball and Satula are adoptable whales with the Blue Ocean Society, and it’s always nice to see them.

The weather kept us on solid ground on Monday which cleared out for us on Tuesday. On the morning trip, we headed to areas where whales have recently been seen. Nope, not there. As we continued, whales seemed to still be hiding from us in other recent areas. Many thanks to our other whale-watching friends who passed along a few finds. Along with two humpback whales - Pinball and Clamp's 2016 calf, we also saw six ocean sunfish.

During our afternoon trip, the beautiful weather continued and we were once again checking out Pinball and Clamp's 2016 calf. The whales continue to remind us they are wild animals with a mind of their own and we look forward to what awaits tomorrow! 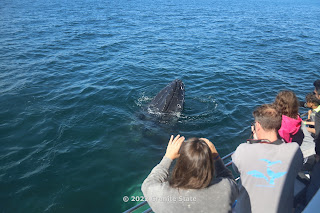 What a stunning Saturday. There was barely a breath of wind out on the open ocean. On our morning trip, we checked out different marine life: four ocean sunfish, Satula the humpback whale, two fin whales, and a minke whale. Pristine conditions to enjoy them all! During our afternoon trip, our first sighting took our breath away. The humpback whale, Clamp's 2016 calf, was curious. I mean REALLY curious. This whale spent time hovering nearby (twice!) as we sat with our engines off awaiting a safe moment to sneak away. What a memorable event. We also found Satula further offshore to wrap up the day.Sunday started just the same. Almost no wind to speak of. We began whale watching with some beautiful looks at a fin whale and even a blue shark that was remaining at the surface for an extended time. We also spotted three minke whales and a humpback whale. Our first sighting of a Cory's shearwater (for our birding friends!) also happened today. Such fun views of a variety of life. The wind finally arrived in the afternoon bringing with it plenty of whitecaps. The whales never seem to mind the added chop. We spent time with two humpback whales, including Clamp's 2016 calf! 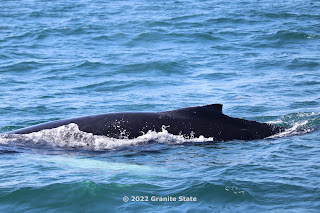 Wednesday morning, the seas were a little swelly (sure, that's a word!)  but the whales didn't seem to mind :) We found fin and minke whales during the trip. The first fin whale was one of the same ones that were seen on Monday afternoon's trip! The second was our old friend #0282, a whale first identified in the area back in 2002! Most fin whales only go by ID numbers, and not names, but in my mind, I call this one "Hurricane". 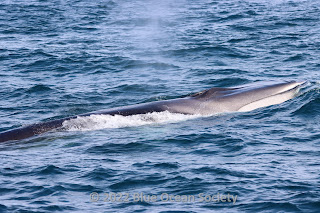 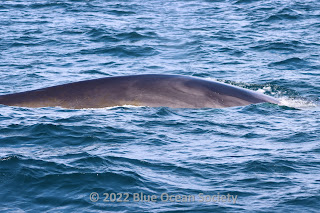 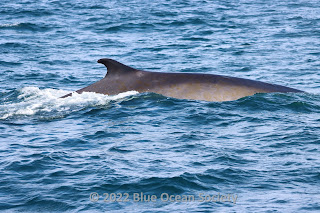 Wednesday afternoon, the wind and seas picked up, making for a less-than-enjoyable ride out to the whale grounds. We tried, but the ocean got the better of us so we decided to head for some calm waters at the Isles of Shoals, looked at some harbor seals, and made our way in early. Not every trip is the perfect one and sometimes we have to succumb to Mother Nature.

Thursday morning’s trip was canceled due to fog. In the afternoon, we were greeted by clear skies and a cool breeze. We spotted a few harbor porpoises before reaching Jeffreys Ledge. Our first large whale was a fin whale who was very busy feeding; covering long distances between dives. We found a second fin whale who was also giving us a bit of a chase. These whales were very focused on what they were doing and we were able to witness how fast they truly are! Before heading home we found Pinball the humpback whale. Pinball gave us some great looks, and passengers were treated to her graceful dives as she lifted her fluke out of the water. A beautiful trip after a foggy morning! 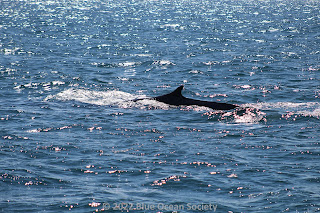 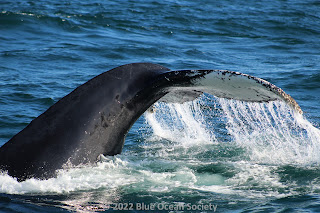 Friday morning, we got a call from one of our fishing friends who reported seeing a whale just a few miles off of Hampton/Seabrook Harbor. Curiosity had us wondering who the whale was so we took a hard right out of Rye Harbor and headed south. Upon arrival to the area, we found not one, but two humpback whales!! Pinball, our well-known whale, was behaving quite typically; spouting, diving, repeat. The second whale was a different story. It began to swim slowly towards our boat. We shut off our engines. The next thing we knew, the humpback was hovering, nearly motionless in the water, just inches from our hull. It lifted its head just enough to exhale, covering many of us in its moist breath. After inspecting our hull for about 12 minutes, the whale was satisfied and moved on, allowing us to regain propulsion and move away in search of other marine life. If only we could know what the whale was thinking! Continuing on, we found a couple of ocean sunfish and then headed home via the Isles of Shoals to do some sightseeing. 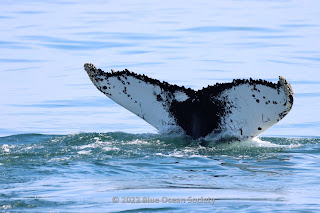 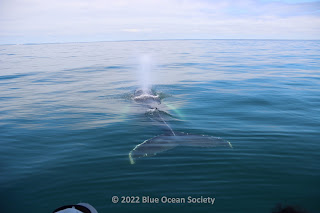 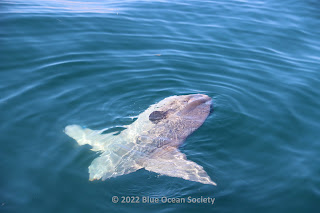 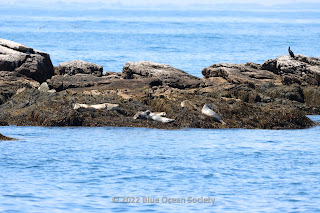 Friday afternoon, we had pleasant conditions, with relatively flat seas and bright sun. Shortly after leaving the harbor, we found an ocean sunfish, or Mola mola. This large fish was darker than most of the ones I have seen and seemingly gave us eye contact as it passed the right side of the boat. 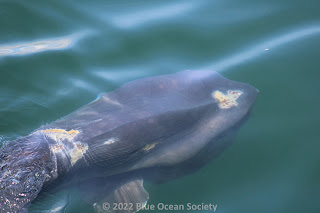 Our first whale of the trip was covering long distances between dives. Every time we caught up to this whale, it went down for another dive! We did manage to get photos of this whale’s fluke pattern for identification, but it was not in any of our catalogs. This may be a younger whale who hasn’t had its fluke photographed before. We then went to an area where another humpback was reported, but we were only able to spot the blow from a distance, and never saw the whale itself. We eventually left and found a third humpback. This whale never brought its fluke up for a dive, but it did tail breach! We do not know who this whale was either. This afternoon was one for the mystery whales! 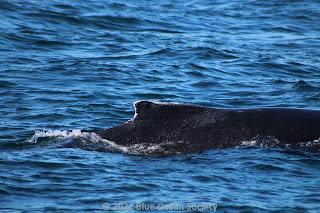