Thursday morning, we had a scheduled USCG inspection (we passed!) which prevented us from watching whales. By the afternoon, we were ready to get back out there and see some whales! A dark cloud followed us for a half hour or so, cooling us off with some gentle rain.  But soon enough, the rain moved on and we were watching whales! A familiar fin whale was our first sighting. This was # 0723 again!


Then we saw a humpback whale who dove while swimming toward us, and after 13 minutes of waiting for it to reappear, we decided to check out another blow in the area. Another fin was seen (no ID on this one yet) as well as another humpback, but in the meantime, a couple pods of Atlantic white sided dolphins showed up!

The second humpback whale was Diablo yet again, and as is common for her, she wasn’t lifting her flukes much. Oh well. We can’t always be that lucky, but at least we saw one lift from her!

Friday morning, we saw a few minke whales in passing on our way out to Jeffreys Ledge.  Before we got to the Ledge, we were waylaid by a pair of humpback whales! As luck would have it, one of these whales is a favorite of the crew. The humpback whale known as Clipper was spotted with her new calf! We saw Clipper and her calf a few days ago, but prior to that, the pair had been seen off Nova Scotia (CANADA)! These humpback whales really get around!

As we continued on towards the Ledge, we found another humpback whale. This one was not familiar to us and we had to check our onboard catalog to figure out who it was.  Surprisingly, this was a new visitor to the area who we haven’t seen yet. This was Dross’s calf from 2018. 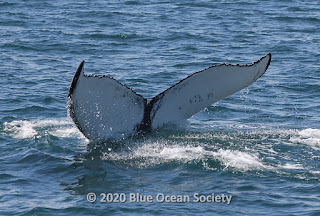 We saw Dross herself earlier in the season on a scouting trip, so it was pretty cool to see that her calf from 2 years ago who still remembered where she hangs out and where to go to find food.

Next up, we spotted a tall blow in the distance. A huge fin whale surfaced and was heading our way! A couple more tall spouts were seen in the distance to the north, but we didn’t have time to check them out.
On our way home, we took a quick look at an ocean sunfish. These peculiar looking fish have been quite prevalent this year!

Friday afternoon, we got a surprise (and brief) look at a minke whale. It surfaced close to us as we were transiting to the Ledge. We stopped to get another look at the “little piked whale” as they used to be called, but no such luck.  Continuing on, our interns alerted us to some dolphins nearby!

These were Atlantic white sided dolphins (the most commonly seen dolphin species in this area). The pod of about 50 including some super cute calves was milling around, and one of the adults jumped right next to the boat, not once, but twice! I always love to see dolphins doing fun behaviors in the wild where they are not trained to do so.  They leap because they want to!  Wildlife is beautiful! 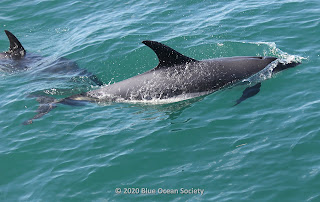 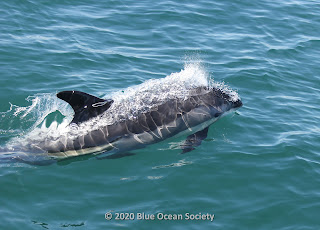 Next, we found a humpback whale named Diablo. This female has been seen several times over the past couple of weeks. She’s been a bit notorious for not lifting her flukes when she dives. However, we did see that gigantic tail breach the surface a couple of times while we spent time with her. 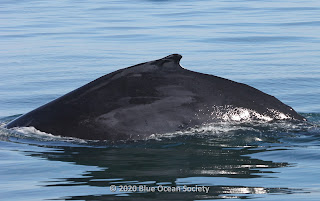 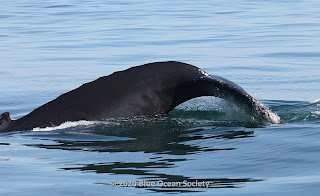 Heading home, we passed by a few seals as well as some harbor porpoises!

For our birding friends, the avian life has been a little slim but we did see a mature northern gannet, a couple of great shearwaters, and lots of Wilson’s storm petrels.

A reprieve from the the steamy temperatures on land was in order on Monday. Offshore, the air was much more manageable and we were off searching for marine life. During the morning trip we saw three ocean sunfish and two humpback whales.
Satula the humpback whale was busy darting around while Diablo decided to be busy from an aerial perspective.
Out in the distance Diablo began breaching followed by a few flipper slapping events. Never a dull moment with wildlife.
On the afternoon trip we once again saw three ocean sunfish and Diablo and Satula.
Both whales were initially on the move but eventually slowed down and angled right in towards each other. On the ride in we even spotted a distant minke whale.

The sweltering heat continued on Tuesday and at times the calm seas were not helping to cool us off. The marine life provided plenty to distract us with though! On the morning trip we saw a minke whale, Pinball the humpback whale, an ocean sunfish and a pod of 30-35 Atlantic white-sided dolphins! What a nice variety of life. 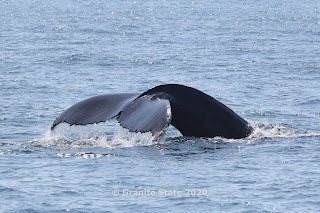 On the afternoon trip to Jeffreys Ledge the variety of marine species continued as we started with a pod of Atlantic white-sided dolphins. Then came a minke whale, an ocean sunfish and four humpback whales.
We even saw a brief look at a blue shark. Satula and Diablo the humpback whales continue to spend time in the area.
We were also fortunate to have our first mother/calf humpback whales for the season. Clipper and her calf made an appearance. What a great sight to an already splendid day!
Wednesday's lack of humidity brought a much more refreshing coolness offshore. Our first whale of the day was a minke whale only a few miles from the harbor!
Out on the ledge we saw four fin whales, including #0723. We also watched Satula and Diablo continue to work the area.
We went back to the same area on our afternoon trip and saw four fin whales, four humpback whales and a minke whale.
At one point, no matter which direction you looked a spout was visible! Along with Satula and Diablo, newcomers Jabiru and Liner were cruising on in. Fun fact: Liner is Pinball's mother!

Saturday was a picture perfect day. At times it may have been too toasty offshore but that was because of the minimal wind. Calm seas surrounded us. In the morning we spotted four ocean sunfish, four minke whales, a humpback whale and a fin whale.
For our birder friends it was a petrel party. We even spotted our first jaeger of the season! A beautiful morning to enjoy wildlife.
The afternoon provided similar calm conditions. Back on Jeffreys Ledge we spent time with humpback whales Diablo and Satula.
A fin whale was not far away and our fantastic keen-eyed interns also spotted a pod of ~20 Atlantic white-sided dolphins.
The afternoon wrapped up with a quick look at an ocean sunfish. What an ideal day out in the Gulf of Maine!
It was good to be on a boat on Sunday. The breeze cooled us down as we traveled offshore. In the morning we saw four minke whales throughout the trip. We also spent time with Pinball. She was all by her lonesome, a bit unusual these days.
Luckily it did not take long for that to change. By the afternoon, after a quick stop at an ocean sunfish, Spoon and Pinball were side by side each other.