This morning we found lots of minke whales and some fin whales only about 12 miles from shore!!  A curious minke whale repeatedly surfaced right alongside the boat! Who says minke whales are elusive?? 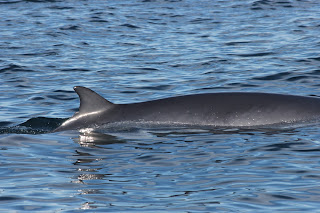 After spending time with a solo fin whale, we came upon a pair of fin whales. These were identified as #0354 and #0403. Interestingly, #0354 was seen yesterday hanging out with Crow. Looks like he is quite the social butterfly!
As we headed out to the Ledge, we found a humpback whale! This whale was traveling north but we got a few looks at her distinctive flukes. This was a familiar whale named Valley! 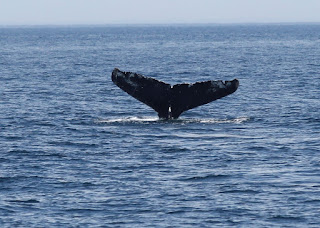 This afternoon, we found a minke whale just past the Isles of Shoals.

After spending some time with this whale, we headed offshore to Jeffreys Ledge and found a humpback and fin whale in about the same area! The humpback, Hornbill, was blowing bubble clouds and was surfacing with a mouth full of fish and water! 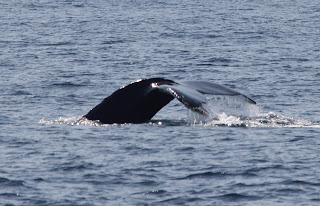 At one point, while Hornbill was down, we spotted a mylar balloon close by. We know that debris in the water poses a very real threat to all marine life so we took this opportunity to pick it up and make the whales’ habitat a little be cleaner and safer.

We left Hornbill and went to investigate the fin whale nearby. We got a couple looks at this huge animal but we were out of time and had to head back in.  The bird life is pretty good with Wilson’s Storm Petrels, Cory’s Shearwaters, Great Shearwaters and northern gannets around today!