Thursday was all about the fin whales! We had at least 7 different whales including a mother calf pair!  Mom/calf pairs are a bit rare to see. We had none last summer, and in an average year, we might see 2-3 pairs. We hope to get some more looks at these two.


Friday morning we found a harbor porpoise soon after leaving the harbor. Then we found a trio of fin whales! These whales were feeding on a smattering of bait near the surface.  We identified two of these whales as ones we had seen in previous seasons. Fin whales # 0520 (first seen in 2005) and # 0945 (first seen in 2009) were together for a bit before going on their own ways.
At one point, the trio went directly below the boat as can be seen on our “fish” finder.

A fourth fin whale was seen as well, but we still aren’t sure who that one is, but it was one of the whales we saw Thursday!

Friday afternoon, the wind decided to pick up, making for a wet trip with sea spray.  Five fin whales were seen, including another trio! These were # 0520 and # 0945 again along with #0932!

On our way in, we dodged a pretty decent storm by cutting through a narrow gap where the rain wasn’t quite as intense. Good job, Captain!

During the morning trip on Saturday we were privy to a behavior I find so spectacular. It may not sound impressive, but seeing a fin whale actively feed is so incredible. One of the second largest mammals on earth maximizing on the plethora of food over and over again.
Moving around, circling back and forth, filtering massive amounts of salt water, this fin whale was busy all the while we were in the area. Such a cool experience watching an everyday kind of activity these mammals need to accomplish in order to survive.
We also saw two minke whales; one only a few minutes into our trip! The morning ended with a humpback whale inshore of Jeffreys Ledge. This whale was moving around quite a bit but with enough looks we were able to identify it as Repeat.
The afternoon trip started with some searching for Repeat. We searched but with no luck we continued further offshore. We ended up finding 3 fin whales all moving around independently of each other. Some were being slightly more conducive for watching purposes but it was still nice to see distant blows around.
The wind was minimal Sunday morning and conditions were beautiful for whale searching. We started the trip checking out a mellow minke whale. This whale was surfacing slowly and smoothly when we first arrived.
Further offshore we came across a fin whale popping up here and there. A very distinct dorsal fin but still working on making a match to who this whale is.
On the afternoon trip on Sunday we traveled to a different area of the Jeffreys Ledge region and came across a fin whale. This particular whale was only staying below the surface for a few minutes at a time. It was darting around but staying close allowing for some great looks.
Turns out this whale is known as #0402, a whale first sighted by Blue Ocean Society in 2004!

There were no whale watching trips on Monday and Tuesday morning wasn't what we were hoping for. Unfortunately, we dealt with fog the entire trip and even after receiving a report of whale activity close by, luck just wasn't on our side. Our searching efforts did not produce any sightings. In the afternoon we left the harbor without any fog in sight so our spirits were high. There were whales. However, the whales were far from helpful in the act of being watched. Two different breaching minke whales were seen from a distance but not when nearby. We also found a fin whale, but once again, relocating it was NOT ideal; two breaths in almost 20 minutes. Yikes! Not whale watching at all by our standards.

Wednesday morning started as a repeat. Fog, fog, fog. We hoped it would burn off to give us greater distances to search. With that aspect not going our way, nor the wind on top of lumpy seas, we again had no luck in the whale department. The weather is bound to change soon enough and that will be a pleasant reprieve!
Posted by Melanie White, Granite State Naturalist/Deckhand and Blue Ocean Society Research Associate at 1:42 PM No comments:

Happy Solstice, Happy Father's Day and perhaps the most exciting, happy opening weekend of the 2020 season! Gosh, it is great to be back on the water. On Saturday, we spent time with Dross the Humpback whale on both trips. This whale was scooting around all day, spending a bit of time under the surface but never ultimately moving far in a consistent direction.
In the afternoon we were even treated to two unexpected breaches! Not a bad first day. 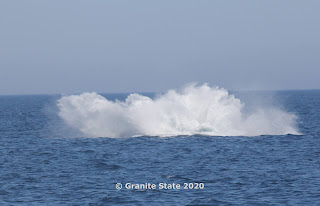 Sunday morning was not fruitful. We traveled almost 70 miles, round trip, searching for marine life. Unfortunately, we were unable to find whales. During our afternoon trip, we attempted to check out two minke whales. Our luck was only slowly improving considering the unpredictable movements of these individuals were not helping our whale watching activities. Our luck finally improved on our way home when we came across a fin whale!
If you would like information or to make reservations for our 2020 season please visit our website at Granite State Whale Watch. Hope to see you soon!
Posted by Melanie White, Granite State Naturalist/Deckhand and Blue Ocean Society Research Associate at 9:32 PM 3 comments: