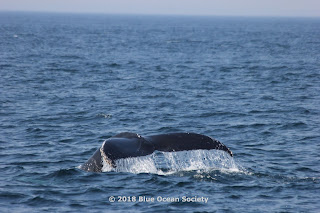 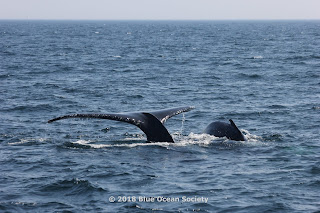 Each day, marine life continues to leave us in awe. Recently, there has been so much to look at and so many memorable moments. Having the opportunity to watch wildlife in their natural habitat is an impressive day and we are so fortunate to see even the smallest glimpse into the lives of these mammals. Today we saw a pod of 12-15 Atlantic white-sided dolphins, five minke whales and eight humpback whales.
Our dolphins came and went throughout the trip, becoming associated with their larger baleen "cousins" as we spent time offshore.
Minke whales were popping up all around us. Our humpback whales were converging with each other at times.
We had moments of watching pairs, trios, a group of four and at one point, before our very eyes, we saw six humpback whales group up together! Suddenly, this group was side by side one another, many of them flipper-slapping all the while having our pod of Atlantic white-sided dolphins in the mix. Wow. What a sight. We were able to identify all the humpback whales we saw today which included Geometry, Spoon, Spoon's 2018 calf, Solo, Sprinkles, Jabiru, Spar and Toboggan.

Sea conditions were stunning today so not only was seeing wildlife perfection, the viewing of all that wildlife was equally as fantastic. On our way offshore we found a pod of 60-70 Atlantic white-sided dolphins.
This nursery pod was so mellow allowing for some beautiful looks at these toothed-whales.

Offshore we saw at least 8 minke whales, a fin whale, 11 humpback whales and a of couple harbor seals.
A group of five humpback whales were napping at the surface together, another pair was moving around in sync and other individuals surfaced here and there.
Identified whales included Spar, Partition, Toboggan, Lava, Churn, Geometry, Fan, Victim and Ravine.
On our travels home we spotted plenty of harbor porpoise making for quite the variety of marine life today!

Activity here, there and everywhere today! Both trips were incredible. This morning we saw two pods of Atlantic white-sided dolphins (a pod of 30-35 and a second pod of 30-40), four minke whales, 10 humpback whales and our first pod of common dolphins for the season (uncommonly spotted in our area)! Most of our humpback whales were resting but upon getting ready to depart the whales really kicked things into high gear. Breaching was happening near the boat, out in the distance, flippers were in the air, there was something to look at on either side of the boat! Known whales included Spoon, her calf, Jabiru, Geometry, Fan, Lava, Partition, Spar, Victim and Ravine. As if this morning wasn't impressive enough, the afternoon continued to hold the bar high. We saw 11 humpback whales and three minke whales. Again, whales were being active by breaching, lob-tailing, tail-breaching, flipper-slapping all by multiple whales.

We are still working on identifying all our individuals but we spent time with Spoon, her calf, Jabiru, Lava, Geometry, Chablis, Toboggan, Victim and Ravine. Even during our time offshore the whales were changing their movements and their behaviors. Tomorrow is a new day with unknown adventures and whatever wildlife has in store for us we will eagerly await.
Posted by Melanie White, Granite State Naturalist/Deckhand and Blue Ocean Society Research Associate at 10:27 PM No comments:

This morning our sightings started with a great group of a mellow moving pod of Atlantic white-sided dolphins. We got some fantastic looks at these whales before continuing along offshore.
We also had a total of three minke whales and five humpback whales. This morning we documented Spoon and her calf in association with Jabiru while a couple of other individuals could be seen out in the distance.
This afternoon we again saw five humpback whales in addition to five minke whales. This time however, we initially spotted Spoon and her calf alone but soon enough Geometry became associated with the pair.
We also briefly watched Jabiru and Patches moving around independently of each other, as a sporadic breach from one whale or another occurred while in the area. It is amazing how bonds between whales can unite and dissolve in such a short period of time. During our travels home, a minke whale breached too(!) only a couple miles from home. Wildlife keeps us on our toes from the moment we leave the harbor until the moment we return!

Friday morning we started our trip off with a huge pod of Atlantic white sided dolphins! At least 200 were all around us. We have definitely lucked out recently with dolphin sightings. In a typical year, we only see them on 20-25% of trips!  Recently, they have been nearly a daily occurrence.   (Of course, now that I said that, we probably won’t see any more for the rest of the season…) 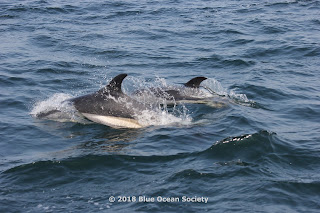 Soon after, we spotted a blow in the distance. As soon as we got close to the whale creating that blow, it jumped out of the water repeatedly. Then another whale jumped! This one was a calf! Yet another humpback surfaced as well. Our Tremendous Trio was still in the area! Spoon, her calf, and Jabiru! 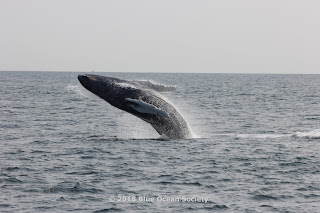 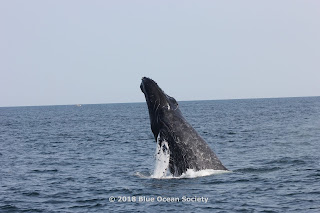 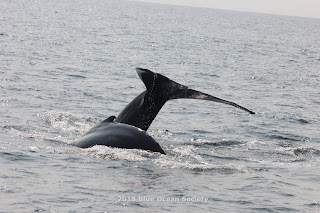 More dolphins were seen milling around the area as were a few minke whales!  Nearby, two more humpbacks were spotted, Geometry and Fan! 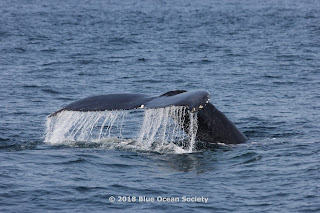 Yet a few more minke whales and even some harbor porpoises were seen on our trip home.

This afternoon, we checked out an area just north of where we had whales in the morning. If we don’t search around, we’ll never know what else might be swimming through. Well, we didn’t find much there. So we headed back to where we had been.  Before we got there, our new deckhand, Lauri, spotted our first whales!  These were humpback whales named Victim and Ravine- both females. 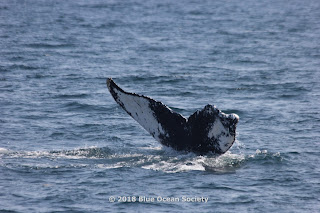 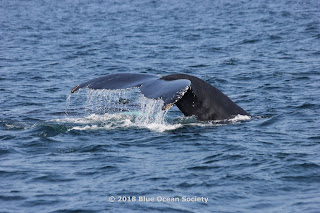 A minke passed by and several more minke whales were seen during the trip. We saw some breaching in the distance and eventually motored over there to find the Tremendous Trio yet again!

But this time Jabiru was visiting with some of the other whales in the neighborhood. She was seen with Geometry briefly, and then later joined up with Victim and Ravine!
Before she took off with her new friends, she tail-breached and tail lobbed a few times!  Thanks for the excitement, Jabiru!