The weather has been less than ideal this fall speeding up the end of the year. Sunday was our final public trip of the season. Luckily the wind was almost obsolete as we spent time offshore in the diminishing swells created during the past week. The ocean was alive with whales. We saw a total of nine humpback whales and three fin whales. The fin whales were being their sneaky selves as they were spending lots of time subsurface.
Not all of the humpback whales were fluking, showcasing their unique pigmentation patterns, but so it goes with wildlife. We found a trio and even a group of five on the move together!
Identified individuals include Bungee, Infinity, Reaper, A-plus and Moonlight.
On Monday, we had an all-day bird trip. There were things to see the entire time. Lots of birds and lots of whales (for our crew!). Sightings included multiple puffins, a leaches storm petrel, a south-polar skua, a little gull, red and red-necked phalaropes, northern fulmars, and shearwaters to name a few! On the whale side of things we had groups ranging from two to five individuals, with some of them lunge feeding on krill! What a way to wrap up another year.

Many thanks to all of our passengers this season. The ocean is a beautiful place with incredible creatures and our hopes are to share a snip-it of that with all of you. Thank you for making 2019 a success. See you in 2020!
Posted by Melanie White, Granite State Naturalist/Deckhand and Blue Ocean Society Research Associate at 7:16 PM 2 comments:

Wow. October already. The season is quickly winding down. There is only one more week of the 2019 season. The weather cooperated quite nicely today. Unfortunately, we have already canceled our trip tomorrow because the wind is scheduled to crank right back up; a seemingly reoccurring theme this fall. Today we saw four humpback whales. We started with a pair: Littlespot and Fan. These two adults were slowly traveling along.

To our astonishment, while spending time with these humpback whales, they breached. But not just one. Both! And simultaneously! Both whales launched themselves high into the air in the most serene synchrony you can imagine. The unexpectedness of the event unfortunately caused for no photographs taken but the memory of the beauty will last a long time. We ended the day with another pair of humpback whales: Ravine and her 2019 calf. These two were being mellow. The calf was even napping for a short time.
Just before leaving the pair however, both mom and calf got interested in the boat! The calf lingered longer but both whales checked us out before continuing on with their day. Even a calf looks REALLY big as it meanders under and next to the boat!
Posted by Melanie White, Granite State Naturalist/Deckhand and Blue Ocean Society Research Associate at 6:58 PM 2 comments:

The swell was certainly swelly today and slowly improved as the day went on. The first whale we came across was a fin whale. Turns out there were two in the area! One was a familiar fin known as Crow.
We also attempted to look at additional fin whales throughout the trip but they were certainly on a mission of holding their breath! Further offshore we spent time with a pod of 50 Atlantic white-sided dolphins. These whales enjoyed the swell as they leapt through the ocean movements with such ease.
The trip ended with a sighting of a humpback whale, spotted during our travels home. Clamp's 2016 calf was meandering around the area.

Yesterday we took a group of home schooled children and their families out on a very calm ocean. The fin whales we found first were less than cooperative so we pressed on. A humpback was found just cruising along at the surface. This turned out to be Swing, a new whale to the area! 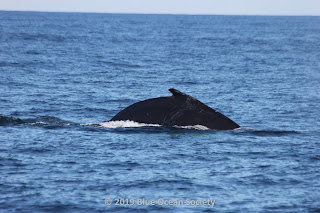 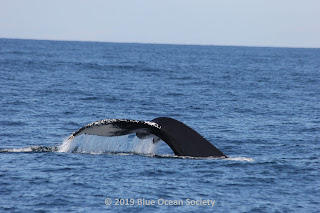 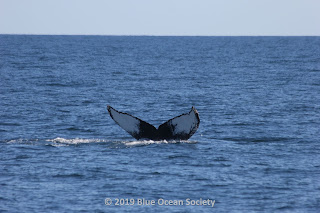 As we followed Swing, we saw a north Atlantic right whale in the distance! What a surprise to have another rare animal in the neighborhood! 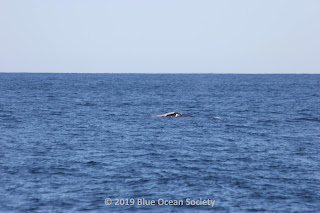 As we were turning to head back in, we saw splashing in the distance. This turned out to be a very active pod of common dolphins (not at all common for our area). The entire boat was treated to amazing looks at these off-shore dolphins! 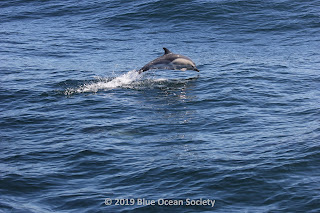 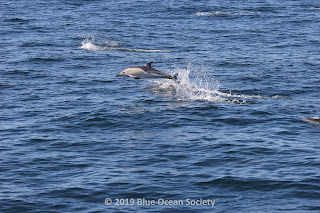 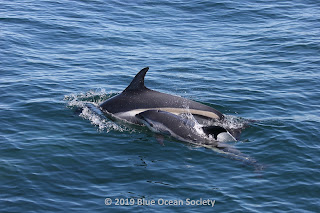 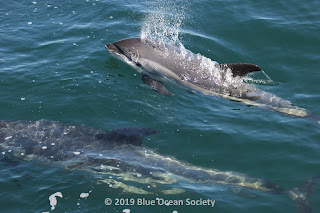 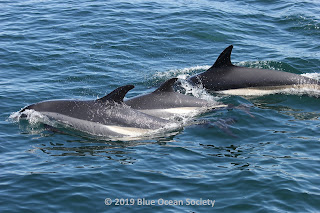 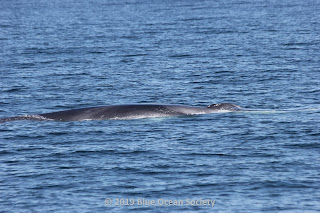 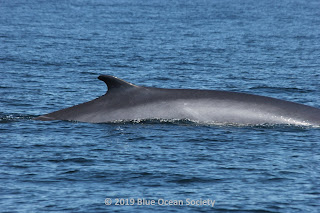 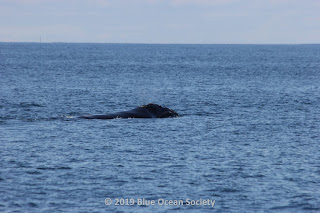 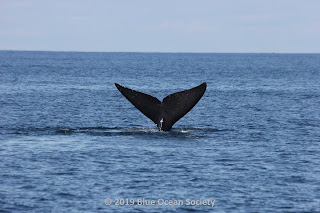 The weather was on our side again on Friday; a crisp horizon and almost no wind to speak of. Our first sighting of the day was minutes after leaving the harbor when we briefly got looks at an ocean sunfish.
Once offshore we found a pair of humpback whales slowly traveling along. A third individual was sighted out in the distance, flipper slapping, but we never did relocate that sneaky whale. The pair we spent some time with was Partition and Slingshot. Both whales we saw earlier this season but months ago! Nice to see them passing through once again.
The trip ended with a uncommon sighting of common dolphins! This pod of 50 whales was VERY curious of the boat, and with such beautiful ocean conditions, watching these toothed-whales zip under and around the boat was pure fascination and joy! 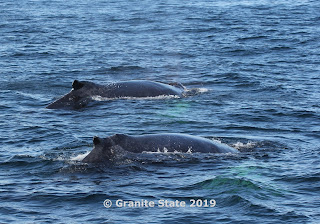 Dorian safely passed and we finally got back out on the water starting on Sunday. Our fall schedule is underway so single trips are occurring during the week. For our full schedule check out our website: www.granitestatewhalewatch.com. On Sunday, the weather continued to improve as the day wore on. Some of the spots where whales were earlier this week were quiet. As is typical, the only way to find whales is to go search for them. So we did. In lots of different offshore locations. Unfortunately, things were more quiet than hoped. We did see three ocean sunfish and a pod of toothed-whales; at least 75 Atlantic white-sided dolphins! 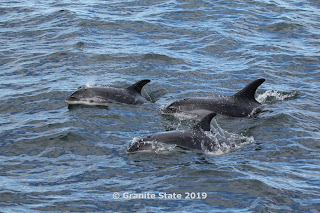 Monday started with more toothed whales. We saw a pod of 8-10 Atlantic white-sided dolphins. Conditions were so pristine, watching any type of marine life was impressive.
In addition, we saw multiple seals, a brief look at a blue shark and eight ocean sunfish. One sighting of those sunfish included a pair clearly associated with each other. So fun!
The day ended with a trio of humpback whales. Owl, Patches and Fan were seen slowly on the move. Definitely a beautiful day with plenty of life to see!