The weather kept us on solid ground on Saturday so heading offshore Sunday morning provided that much more anticipation of what and where we would find whales. There was initially plenty of life to look at, but all of the wrong marine variety. Fish, jellyfish, and more fish!

Multiple ocean sunfish were sighted, at least 10 blue sharks were seen, and so many jellyfish subsurface! So we continued searching and ultimately came into an area where there were numerous humpback whales.

We headed back to the same area in the afternoon and spent time with eight humpback whales, with even more scattered around in the distance! We even had a group of five whales! Individuals for the afternoon were Sword, Valley, Jawa, Gunslinger, Ravine, Shuffleboard, and Owl. 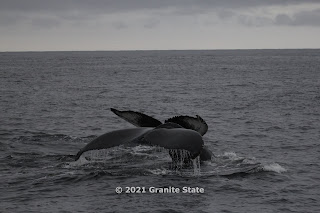 Thursday morning, we headed out on calm seas. The conditions made it easy for us to spot a pod of about ten harbor porpoises. We continued to Jefferys ledge to find several humpback whales. We spent time with Owl before getting a quick glimpse at a pod of about 20 Atlantic white-sided dolphins. We also had Palindrome stop by for a few looks. There were two other humpbacks in the area that we were unable to ID. 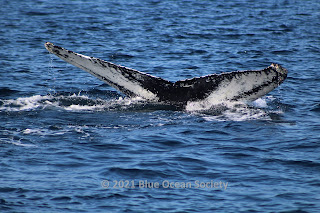 Next, we found a sleepy humpback whale named Spoon. She never showed us the underside of her fluke, but thankfully she is pretty recognizable from multiple angles. After leaving Spoon, we found a larger pod of about 50 Atlantic white-sided dolphins. This pod was more active, and many of the dolphins leaped out of the water as we took off. 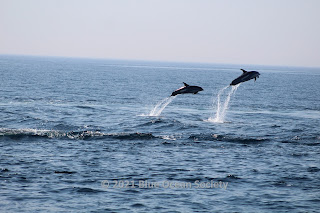 We wrapped up our trip with Satula, who we first spotted as he chin breached several times ahead of us. Once we got closer, he continued showing off with a couple of tail breaches. On our way back to the harbor, we cruised through the Isles of Shoals and were able to see a few gray seals close to shore.

The afternoon trip started pretty hot and sticky in the harbor, so it was a relief to head offshore! We first encountered a humpback named Clamp. She gave us some great close-ups! Another humpback whale, named Owl, was spotted in the distance while we were with Clamp. 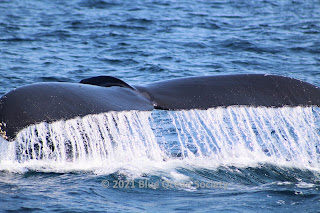 We spotted flipper slapping and lob tailing in the distance, so we headed in that direction. Once we arrived, the surface activity had ceased, but we found a trio of whales. These whales began napping we were able to see their flippers glowing a green hue in the water. These three whales were Shuffleboard, Frost, and Patches (featured on the Granite State Whale Watch brochure). 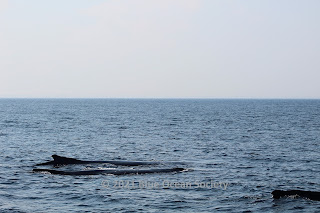 The whale we visited was Spoon, who was talking longer dives. Clamp surprised us by popping up and swimming in front of the boat towards Spoon though these two never actually met up. Clamp dove quickly below the surface before Spoon followed a few minutes later. Today was the perfect day to beat the heat on the boat!

Friday morning, we struggled to find large whales but the smaller whales made up for it. We found a group of about 8 Atlantic white-sided dolphins racing around, and then a relaxed pair of ocean sunfish! Sunfish are usually by themselves, but these two seemed to be attracted to each other. The glassy seas made for perfect viewing conditions. 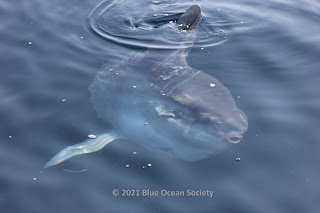 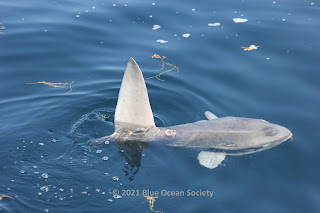 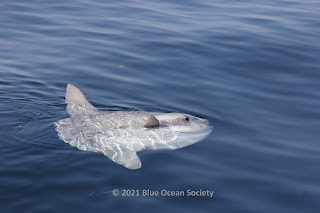 We passed by a couple of harbor seals before finding a very cooperative minke whale! Minkes have been a bit elusive this summer, so it was fun to watch one consistently and get some great photos!

A couple more minke whales were in the distance before our mate Matt saw a fin whale spout further out. But this wasn’t just any fin whale. This was a fin whale escorted by a large pod of Atlantic white-sided dolphins! Fin whales have been slim pickings this summer, so to make the situation even better, it was a whale that we know! Fin whale #9709 was back! After she dove, all we needed to do was to keep track of the dolphins, as they were tracking her movements from the surface. Being cautious not to get too close to the dolphins, our patience was rewarded when she surfaced right in the pod! 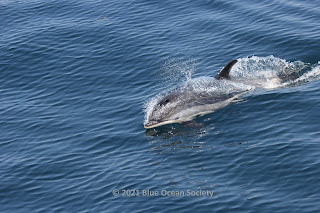 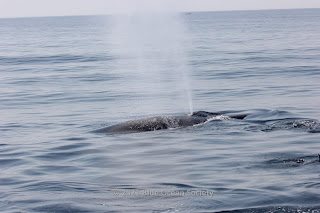 As we watched the fin whale and dolphins, we noticed a humpback whale nearby. Eventually, we made our way over to where it was last seen, but after 17 minutes of waiting, we never saw it come back up. We headed a bit farther offshore to where some fishing boats had seen a different humpback. We waited over 23 minutes and never saw that whale either! Large whales can hold their breath for an hour, but that is rare in this neighborhood.

Friday afternoon’s trip was quite different from the morning. We decided to check out some other areas that hadn’t been covered in a while. We passed just north of the Isles of Shoals and soon found several blows. A single humpback whale and a pair of humpback whales were found!  Before we could even identify all three whales, they got together to form a trio. Jawa, Valley and Sword coordinated their dives as they slowly swam towards the Isles. 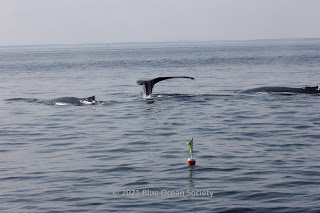 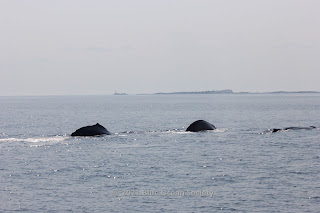 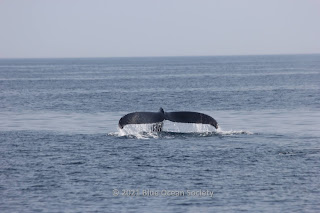 A little further east, we found Owl who was doing some feeding! We saw bubble clouds that she was blowing to corral her prey. 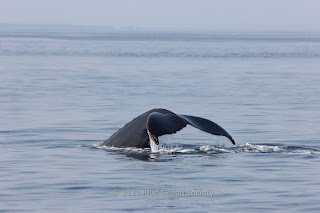 Exploring some more, we saw a group of tuna moving just below the surface and a minke whale that was acting a bit elusive. Our trek home brought us back to Owl for a few last looks.

A distant minke whale rounded out the trip!

The ocean was like a lake today! Glassy calm water made for optimal viewing of marine life.

Our morning trip began with quite the dilemma. Do we check out a pod of Atlantic white-sided dolphins first or the flipper-slapping humpback whales? Not a bad problem to have! We chose the dolphins as they can be more easily lost if they are traveling through the area. Absolutely incredible views of these curious, little toothed-whales! They came right alongside the boat and even leaped out of the water several times! We saw lots of calves in the group, too.  A couple of the males were acting a little frisky, swimming on their sides and slapping their flukes. 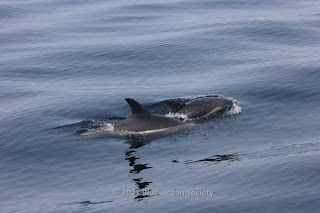 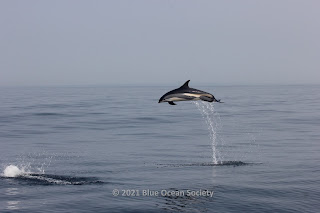 We could see the humpback whales in the distance, still flipper-slapping, so we headed that way. Patches and Shuffleboard were hanging out together, quietly at first, and then resumed their display. Humpback whales are known for slapping their flippers on the water, assumingly as some form of communication, but more than once, Patches slapped himself! Ouch! That flipper weighs around 2000 pounds and has scratchy barnacles along the edge!  “Things that make you go hmmm.” 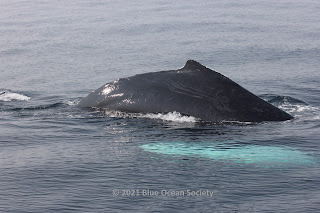 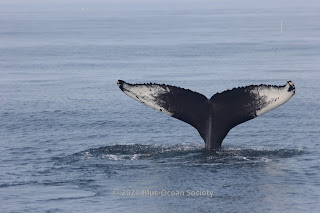 Continuing on, we found two more humpback whales named Quill and Clamp. They were each doing their own things and acting a bit more typical- just breathing and diving! 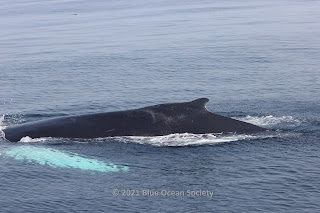 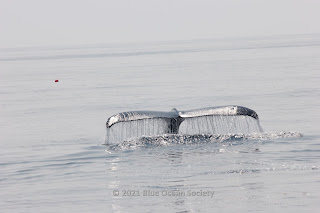 The afternoon started off by passing by harbor porpoises, a harbor seal, and a blue shark. I wish these sharks were a little more friendly, as they are super cool looking, but it’s probably best for their own well-being to steer clear of humans.

Our adoptable humpback whale, Satula, was seen first and showed evidence of feeding by the clouds of bubbles he was blowing to concentrate his prey.  The new injury (from last month) appears to be healing and not slowing him down. 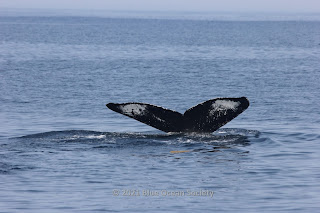 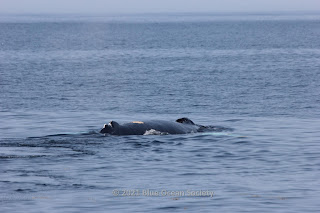 We then found Jabiru and her calf. This poor calf has been severely entangled in fishing gear at least twice this season, the first of which left a sizeable linear laceration around its body.  The calf appears to be doing ok, and we hope it continues to avoid the plethora of fishing gear that dominates the Western Gulf of Maine. While watching the pair, our captain witnessed an ocean sunfish jump close by! 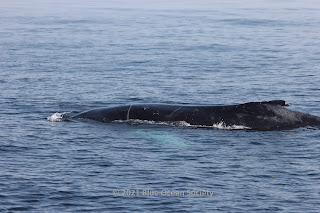 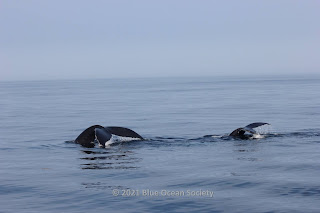 As we turned to head back to Rye, we took the long way home, searching for a reported pod of dolphins. Something in the far distance caught Captain Jonathan’s attention. By far distance, I mean FAR distance. He spotted the pod of dolphins from nearly 5 km away. I don’t know how he does it, but he does! I estimated around 200 Atlantic white-sided dolphins in this pod, and they were on the move. Surfacing close to the boat and leaping out of the water, they put on quite the show- way better than Sea World, in my opinion! As we picked up speed, the dolphins surfed in our wake! 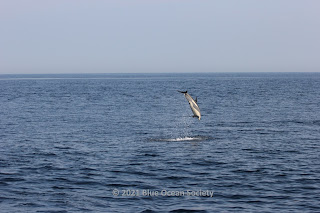 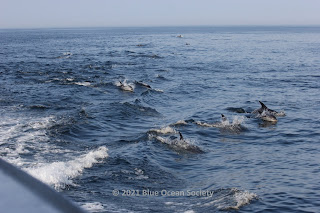 Fabulous day! We even saw a small group of harbor porpoises on the way home!

As Henri departed the area, we were able to get back underway in search of whale activity on Tuesday. As the day wore on the swell dissipated and visibility was on the rise. During the morning trip, three humpback whales were sighted- Quill, Patches, and Shuffleboard. At one point we had whales flipper-slapping at the same time.

On the afternoon trip, we first found Patches and Shuffleboard. These whales were initially swimming independently of each other but eventually became associated. We even got a few flipper slaps!

We also spent time with humpback whales Jabiru and her 2021 calf. What a fun surprise, as it has been some time since we last saw this pair this season.

Saturday allowed for one more day to enjoy the ocean before Hurricane Henri started to make itself known. There was barely a breath of wind on the morning trip. The first sighting of the day was a pod of toothed whales! A pod of 50 Atlantic white-sided dolphins was moving through the area.

Such calm conditions to watch these zippy whales. Further offshore, we checked out an ocean sunfish before seeing six humpback whales. 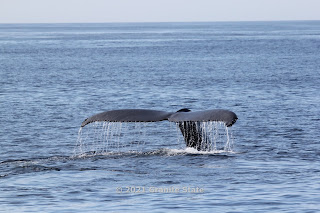 A larger swell was waiting for us offshore on Saturday afternoon. And so was some fog! Luckily the offshore fog held off for just the right amount of time for our whale-sighting needs. Five humpback whales were seen including Satula, Spoon, Chromosome, Quote, and Shuffleboard.

Many of our whales were napping giving us the chance to float nearby and enjoy their relaxing afternoon!

We will not be whale watching tomorrow. Stay safe and stay tuned for our next adventure as soon as the weather allows!