The stiff westerly wind was blustery onshore today but thankfully didn’t reach much further past the Isles of Shoals making for some very nice whale watching conditions.   This morning, the first fin whale we located was our friend, Dingle.

He has been seen a couple of times recently so great to know that he’s sticking around! He must have been doing some feeding since he, uh, relieved himself near our boat. What a lucky group we had onboard this morning. Not everyone can say that they have seen whale poo!   As we were watching Dingle, a minke whale also scooted on by.

We continued on to find another minke whale and then a second fin whale. This one goes by the ID# 9709, a female who calved last year! Fin whales typically give birth to a new calf every 2-3 years.

#9709 is also known for her “sneak attacks” as was evidenced today! She surfaced twice without warning very close to our boat as we were sitting still waiting to see where she’d surface next. I remember years ago, she came up right underneath the pulpit of the boat and everyone on the bow got a nice covering of whale breath!

We started to head home, and found another minke whale. We were passing by the Isles of Shoals, just 5 miles from Rye Harbor when we saw another large spout right in front of us! Another fin whale, and pretty close to shore! Sometimes whales chase the bait fish in to more coastal areas but it is rare to see one between the Shoals and the harbor! We aren’t sure who this whale was yet but we are hoping to identify it. 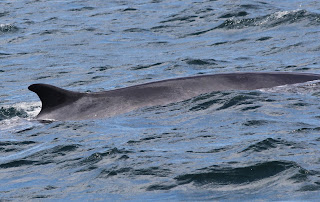 This afternoon, we headed out in search of our in-shore fin whale but only found a minke whale in its place.  We spotted a second minke whale just past the Shoals. Then we saw a spout from a larger whale. Fin whale, Comet, was back! This is the first time to my knowledge that Comet has been seen this year. She had an extremely curious calf last year, and today she decided to do a close approach to us herself.  We have been sighting Comet since 1997- nearly 20 years, so it was fantastic to see her again!


We found another minke whale before seeing another elusive blow in the distance. This was likely the whale that goes by the ID# 0282, but it wasn’t being all that cooperative for our purposes. This whale had feeding in mind and was all over the place. Hopefully we’ll see it again soon. But as we were waiting for 0282 to resurface, we spotted a young seal pup just off the bow.

We continued a bit further to find another fin whale. This one hasn’t been identified yet. 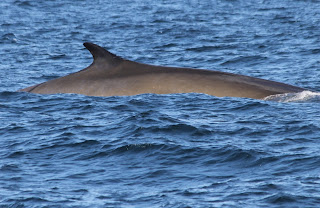 Then on the journey home, we passed by yet another fin whale!   It is so nice to have whales relatively close to shore these days; more time with whales, less travel time! Last week we had to travel 2 hours to see whales! So glad we had some much closer today.