With today being our final public trip for the season we could not have asked for a more impressive whale-experience to finish with. The weather kept us on our toes longer than we were hoping but the wind eventually decided to slack off as we spent time offshore watching plenty of wildlife today. We saw 14 Humpback whales around the boat with even more spouts out in the distance! There was even a harbor seal sleeping and a brief look at 3 Atlantic white-sided dolphins during our travels. Each time we stopped to check out a sighting the whales were grouped up in pairs, trios and at one point even five on the move together! We saw whales napping, nursing, tail breaching, rolling over, flipper slapping, tail slashing, spy-hopping and being quite curious about the boat. We were surrounded by some phenomenal sights and sounds from these wild animals. Among all our whales were some familiar tails and, once again, more new whales moving into the area. We saw Spoon and her calf, Patches, Sword, Victim, Repeat, Cloud, Geometry, Daffodil, Shuffleboard and her calf, Churn, Pleats and A-plus!

All throughout the trip there was so much to look at and experience.

At one point we were held hostage by a trio of whales as they decided to come check us out rather than us just checking them out. We literally could not move as they turned and moved right towards us, surfaced and sank right next to us and swam circles around us.

These whales were so close photos were near impossible to capture with too big a lens on! The memories however, were incredible.
We also want to take this time to pass along the many thanks to all of you who joined us over the course of this season. It could not have been a successful year without you. We are passionate about what we do and know so many of you share in the same amazement and awe of these wild animals. We hope you all have enjoyed your special moments and memories we hopefully helped to create while out on your adventure. Each year, it seems that we have more and more familiar faces returning and for that, we thank you. These whales have a way of capturing our eyes, hearts and souls and capturing those experiences with all of you is what we strive to do on every single one of our trips. Please have a safe winter and see you all in 2016!

The wind and waves have been keeping us attached to the dock this past week so you can imagine how excited we were to have the weather-window finally open so we could get back to the open ocean to look for whales! Anytime a big weather pattern keeps us on land we are eager (and extremely anxious!) to see what may, or may not, be out in the area where we last saw whales. The ocean gets extremely churned up and can cause whale-food to congregate more tightly together, can shift areas or completely disperse all together. Alas, the whales were waiting for us in similar locations to where we have been seeing them over the past month. Perhaps even more exciting was seeing some of the familiar tails we've had in the area recently but also some new whales that we have not spotted in our area at all this season. In total we came across 10 Humpback whales, 2 Minke whales and 4 Harbor seals. Our Minke whales were on the outskirts of the area as we moved around all the whale activity today with harbor seals popping up here and there as well. We started with a sleepy mother and her calf Humpback whale pair. Shuffleboard and her calf were resting at the surface the entire time we watched them.
We then headed a bit further offshore and came across a trio of whales. Clipper, Sword and Clamp were all slowly moving through the area together!

These are very well-known whales to the area so to see them spending time with one another was certainly a special treat! With some phenomenal looks at these whales we headed to another trio as we watched out in the distance, and a few times once on scene, some breaching! Daffodil, Repeat and Geometry were swimming around together. It was Geometry that continued to be the active whale rolling and flipper slapping the majority of the time we watched this group of whales maneuver around.

To round out an already wonderful day we got a few quick looks at Owl and her calf before heading back to Rye Harbor. This coming weekend is our last weekend for the 2015 season. We hope the weather cooperates so we can get back out there for one last "whale-fix" seeing what/where/who may be spending time in the area!
Posted by Melanie White, Granite State Naturalist/Deckhand and Blue Ocean Society Research Associate at 5:28 PM No comments: 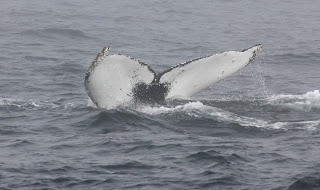 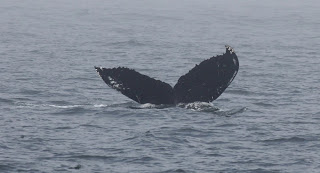 Next we headed towards the fleet of tuna boats where we had spotted a blow earlier. Although we never found this lone whale, we did re-sight Shuffleboard and her calf along with a minke whale and harbor seal before it was time to head for home.   The day was really such a welcomed change from yesterday!
Posted by Dianna Schulte, Blue Ocean Society Director of Research at 6:59 PM 2 comments: 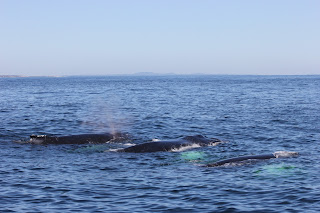 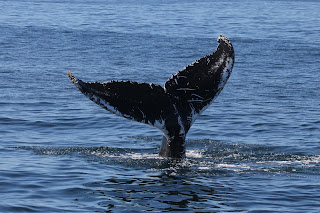 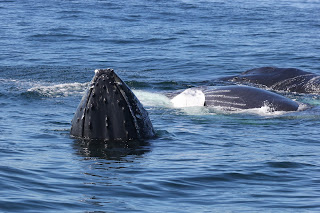 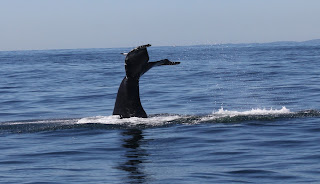 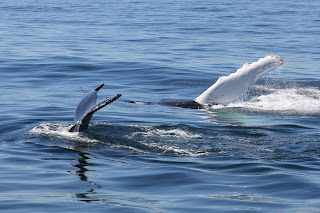 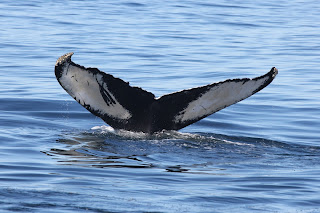 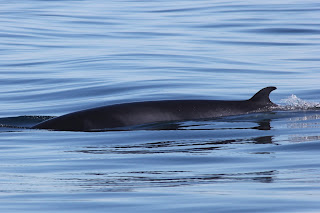 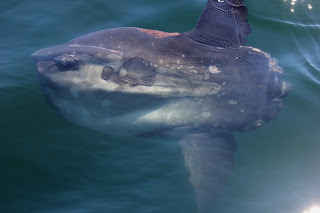 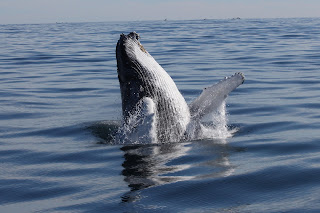 We passed by another harbor seal on the way home. What a truly awesome trip!  I wish every trip could be this incredible!
Posted by Dianna Schulte, Blue Ocean Society Director of Research at 4:47 PM No comments: