The whales continue to leave us in awe. We had so much whale activity surrounding us there wasn't enough time to check everything out! Today we spent time watching 8 sei whales, 4 humpback whales, a quick glance of a minke whale and a pod of 10-15 Atlantic white-sided dolphins. And if you are a bird fan our dedicated birding friends counted over 500 northern gannets flying around all the whale activity! Most of the whales we saw were actively feeding at the surface. Sei whales were skim feeding and lunging through the water while humpback whales were kick feeding and creating bubble clouds.

Our humpback whales were identified as Shuffleboard, Nile, Owl and her 2017 calf! Owl is one of our favorites and also a Blue Ocean Society adoptable whale!
Perhaps the icing on the cake for the day was a small pod of Atlantic white-sided dolphins on the move through the area. They charged and leaped through the waves giving us such an appreciation of the speed, agility and size of these toothed whales.

Happy Memorial Day weekend everyone! The unofficial start of summer has arrived and with that the start of the weekend could not have been more impressive. We had saw six different types of whales today; so much to look at! Our sightings today included 2 fin whales inshore of the Isles of Shoals, 4 minke whales, 20 sei whales, 1 highly endangered North Atlantic right whale, humpback whale #0050 and a pod of 10 Atlantic white-sided dolphins. Wow, what a list!
Almost all of the sei whales were actively feeding at the surface. At one point we literally could not move as we were surrounded by whales in all directions lunging through the water.
If only every day was just as active but that's why wildlife is so amazing. Never will we know what, where, and how much life we will encounter on any single day. Nature will always have us giddy to learn what may be out there!

If you could imagine a great day of whale watching today would be one of those days. The weather was perfect with seas calm and the sun shining as we headed offshore today. The calm seas meant any good-sized disturbance had the potential for our target activity: whales. Little did we know what we had in store for us. We ended up seeing 21 whales and that does not include the spouts we saw out on the horizon and just didn't have the chance to get to! The breakdown of our whales toady included 6 fin whales, 6 humpback whales and 9 sei whales!

Single and pairs of fin whales were around as humpback whales popped up here and there. The humpback whales we identified today included Veteran, Nine, Willow, Spoon and Cirrus. However, it was the sei whales that stole the spotlight today! This species can often go unseen during a season so not only were we lucky to come across so many of these speedy baleen whales but they were actively feeding as well!
We witnessed multiple sei whales skim-feeding and lunge feeding through the water. Incredible moments in incredible conditions meant today was quite the picture perfect day.

The spring season always provides a bit of anxiety since we have to wait so long (a full week!) to get back out to search for marine mammals. Today we got the chance to see more familiar whales return for another feeding season. In total we saw 2 fin whales, 6 minke whales and 6 humpback whales. Our humpback whales included #0050, Sabot, Mogul and our first mother/calf pair of the season; Flash and calf! Note just how unique each humpback whale's black and white natural markings can be!

A few of our humpback whales were creating bubble clouds which is great news knowing that bubble clouds are used to corral food. Lots of food = a good chance of whales being around! On on way home we even had a few more surprises seeing fin whale Crow and humpback whale Veteran!
We love the chance of surprises at any moment when you are spending time surrounded by nature. Tomorrow is looking beautiful so hopefully we will get a chance to enjoy more time with some massive mammals!
Posted by Melanie White, Granite State Naturalist/Deckhand and Blue Ocean Society Research Associate at 7:35 PM No comments:

The time has finally arrived for another season of whale watching! Winter can soon become a distant memory as we switch gears to summer sun and searching for whales. Granted the summer weather is far from arriving as we headed out in gray skies and air temperatures of 48 degrees on the water yesterday! Luckily for us though the whales are busy using the cold and productive feeding grounds offshore. Excitement to be back on the water, wondrous of what/who we might find and eagerness to explore some familiar areas were just some of the emotions going through our minds, and that was just the crew! The day started with a large and slightly elusive fin whale. We caught some glimpses of this massive whale before it continued traveling along and we were anxious to get out to Jeffreys Ledge. Thanks to our research friends at Blue Ocean Society for Marine Conservation who tirelessly maintain a Fin Whale Catalog of the Jeffreys Ledge area, we were able to match up our first whale of the season to a fin whale first spotted in this region in 2008!
As our travels took us onward we ended up checking out, and passing by, a total of 5 minke whales for the day. We also spent some time with another massive fin whale. This was another familiar "friend" for us. Fin whale #9709, a known female, was seen circling around the area. This whale has been spotted over the years since 1997!
We soon spent some time searching around and ended up seeing a different species out in the distance. It was a humpback whale and one we did not recognize right away. After some sleuthing through the Humpback Whale Catalog we were able to match this newcomer to Doublet, a whale that is most often sighted off the coast of Nova Scotia, Canada!
We always say the whales are constantly moving around the Gulf of Maine searching for food. Perhaps this whale decided to stop for a quick meal or two in our part of the ocean before venturing on north!
Our last whale of the day was a VERY familiar whale to us. It was Hornbill the humpback whale; an adoptable whale.
But Hornbill was not just swimming around like we see most whales do. This whale was actively breaching! What a sight from such a familiar whale and the perfect ending to our first trip of the year. 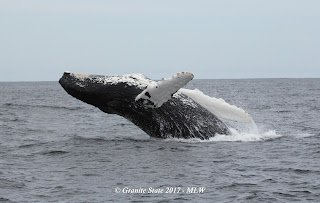 Our whale watches are currently running on weekends. Visit www.granitestatewhalewatch.com to see our full summer schedule. Don't forget to check back on our blog for images and wrap-ups from our trips this season. And finally, if you are on Facebook, we also post our findings and photos for you to enjoy, and reminisce, about your time on board with us: Granite State on Facebook. Here's to 2017!
Posted by Melanie White, Granite State Naturalist/Deckhand and Blue Ocean Society Research Associate at 11:38 AM No comments: