The whales continue to be close to shore! We began our trip this morning with 4 fin whales- 2 were solo, and 2 were in a pair.  However, the pair split up and one of the two was seen hanging out with another whale. We likely had half a dozen fin whales cruising through the area!  Minke whales were also abundant with at least 6 of them spotted as well. 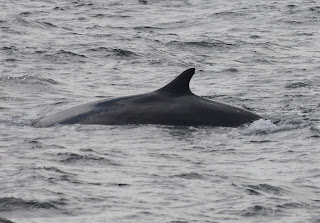 We continued on our adventure to find a pair of humpback whales- Pinball and her calf are still around!! So great to see these two using our area for feeding and nursing! While Pinball was below the surface (likely feeding on small fish), her calf was quite active! We saw the calf tail breach, lob-tail and even nurse!  We have been seeing this pair frequently for the past week and can only hope they decide to stick around!

Soon, it was time to head for home, and just when we thought the whale watching was done for the trip, we came upon a pod of Atlantic white sided dolphins!!  This was my first sighting of dolphins this summer and I think the boat has only seen them twice before. These small “toothed whales” were amazing, cruising right alongside the boat and even jumping out of the water a few times. This is what we would call a nursery pod, as we saw lots of mothers and calves. So cute! Dolphins are always a lot of fun to watch and this was certainly the perfect ending to an already wonderful trip.

This afternoon, we ventured out to where we had seen the whales from the morning trip, but  didn’t find them in the same place. Whales move around a lot! Instead, we found them even closer to shore!  Just a few miles past the Isles of Shoals, we found four fin whales including our friend, Crow, who was spending the afternoon with a yet-to-be ID’ed whale. 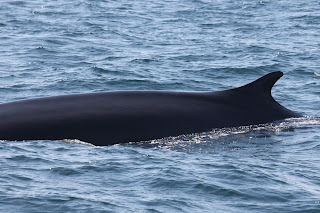 Heading out a bit further, Pinball and her calf were still around and this afternoon, they decided to do some people watching!! It really does amaze me how remarkable these whales are, and I still wonder what they are thinking. Several times, Pinball and her calf would approach the boat, dive right below us, and surface on the opposite side. We had our engines turned off for most of the encounter. We didn’t have to follow them around. Pinball was feeding in the area and the calf spent most of its time playing at the surface, giving us quite the show! Lots more tail breaching, tail-lobbing, a partial breach, flipper slapping and just rolling around at the surface was what this little one had on its mind.


The cutest part of both trips today was when Pinball’s calf was trying to feed like adult humpbacks do.   The calf would blow bubble clouds and then surface either in them or right next to them. Adult humpbacks blow bubble clouds to condense the schools of fish so that when they charge through the school, they should get more fish per lunge.  It was really cool to see the youngster learning from Mom and well on its way to being independent!

We couldn’t have asked for a better day on the ocean with our local wildlife! I hope the sightings continue for the upcoming weekend!
Posted by Dianna Schulte, Blue Ocean Society Director of Research at 8:37 PM