A couple minke whales were also in the mix. We looked offshore and noticed a lot of splashing- another humpback whale was flipper-slapping! We cruised out there only to get a very brief look at Nike, and then never saw him again.

But we did see another blow nearby. A huge fin whale surfaced repeatedly right behind the boat. This was Comet!! We got some truly amazing looks at her as we had calm seas and could see her face underwater when she came so close to us. Beautiful.    We then saw a second fin whale, and also, to top things off, a pod of Atlantic white sided dolphins! 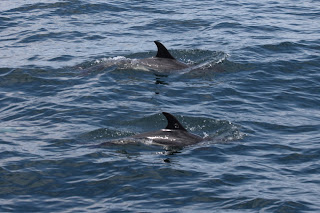 We also passed by a 3rd fin whale on our way home.

This afternoon, we found a humpback whale right by the Isles of Shoals. We usually have to travel at least 10 miles to see a humpback but this one was just doing some slow surface traveling. We still have yet to figure out who this coastal whale is but will update when we find out.
We then headed out further to find humpback whales Hornbill, Shuffleboard and Pinball and her calf once more.  Hornbill was very obliging by swimming right towards us before diving alongside the boat. Pinball and her calf really stole the show though.

Pinball was tail lobbing over and over while her calf rested nearby. Then the calf started to be active, tail breaching and flipper slapping repeatedly. Awesome!!

Then just as we were leaving, the pair was tail breaching and flipper slapping in tandem. This was really fun to watch. We still don’t know why whales do these things but always fun to watch. Then as we were heading home, Shuffleboard was spotted tail lobbing and tail breaching too!
As one of our guests pointed out, I do have the best job ever!  Thanks to all of our guests- you are allowing me to live the dream!
Posted by Dianna Schulte, Blue Ocean Society Director of Research at 8:29 PM