This morning started off like most other mornings of whale watching.  We dropped our lines and headed East towards Jeffreys Ledge in search of whales.  We cruised past the Isles of Shoals and soon found our first of nearly a dozen minke whales! 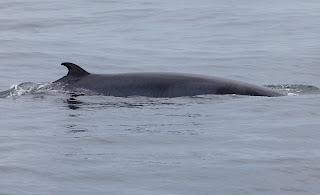 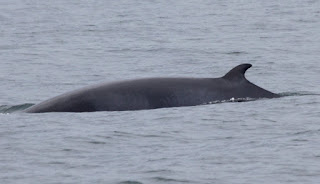 As we were hanging out with the minkes, we got a call on the radio from one of our seasoned fisherman friends informing us of some whales he saw to our south.  Captain Dan said that 2 of the 3 whales were of a different color than the ones he’s used to seeing. They were sort of a blue-gray, and not the dark gray or black he usually sees.  Hmmm, we thought. His description sounded like they could be blue whales, the largest animal ever to live on Earth! But could it be?   Blue whales are really rare in our area. In the Atlantic, they are usually sighted off the St. Lawrence in Canada. We might see a blue whale every 5-10 years, so it was possible, but rare.  We made our way down to that location, along with another curious whale watching boat.  They spotted some blows, but the whale was being elusive, coming up for just one breath and then spending 12 minutes underwater, and resurfacing a half mile away. They were only seeing the blows so they weren’t sure what species of whale it was. We arrived and after a lot of patience, saw the whale. It was indeed a blue whale. BUT….not just one, but two blue whales!! Amazingly awesome!!  In my 20+ years of watching whales around here, I’ve only seen blue whales 3 times before. And I’ve never seen 2 together! I could go on and on about how excited our entire crew was, but you get the picture.   And speaking of pictures, we did get lots of great images of these 2 whales, so we can tell them apart by their tiny dorsal fins and unique mottling patterns. We’ll be sending these photos off to researchers in Canada who study blues and see if they recognize our whales. I’ll be sure to update when we hear back!! 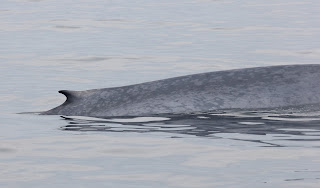 So on the ride in, we weren’t quite done watching whales, and found a fin whale and even an ocean sunfish! Fantastic morning!

This afternoon was also pretty great. We passed by several pods of harbor porpoises and harbor seals before finding  a big pod of Atlantic white sided dolphins. We had ideal conditions for watching these 7-9 foot toothed whales as they swam right alongside our boat! The dolphins have been rare for most of the season but lately we have been seeing them more regularly. 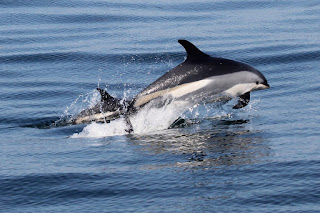 We continued on, searching some areas we hadn’t been to recently, and found a small blue shark and another fin whale on our way home.

Days like today prove that we never know what we’ll find out there from day to day or even from trip to trip!
Posted by Dianna Schulte, Blue Ocean Society Director of Research at 8:35 PM