Glassy calm seas greeted us this morning as we left Rye Harbor in search of whales. On our way out, we did something we rarely do- pass by whales! Several small pods of elusive harbor porpoises and a few minke whales were spotted close to shore. We rarely pass by whales but we had a report of more whales a little further out that we wanted to make sure we had time to see. Our gamble paid off this time!  Our first stop was not on a whale though. It was a big ocean sunfish!  Sunfish have been rare this summer so we were happy to find this one.


As we watched the sunfish, we saw a blow in the distance. We came upon several humpback whales including Hornbill, Pinball and her calf, and Shuffleboard. Owl was out in the distance as well!  A minke whale approached us briefly, and a fin whale was cruising around in the distance. Amazing morning!

Then we ventured on to find a huge pod of Atlantic white sided dolphins! This was one of the most active pods I have ever seen! Dolphins were charging around, chasing fish, leaping into the air, and swimming by the boat. Gulls and gannets were abound trying to catch some of the same fish the dolphins were feeding on. The pod was around 200 animals. Amazing! 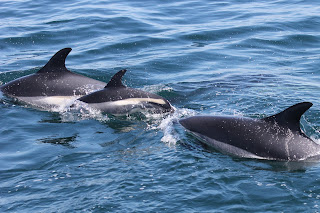 This afternoon, most of the smaller whales (including the dolphins and porpoises) were not to be found, but we did see 5 humpback whales and a minke whale!  Owl was nearby this time, showing off her distinctive scar. 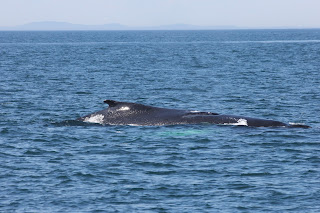 Pinball and her calf were quite sweet, diving in synchronicity. 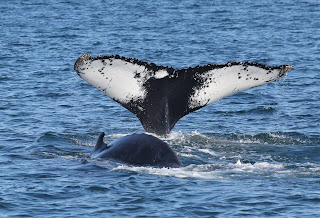 Shuffleboard was spotted and before we knew what was going on, she was hanging out with a new whale to the area known as Nike! 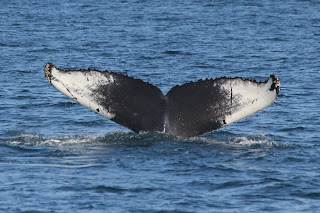 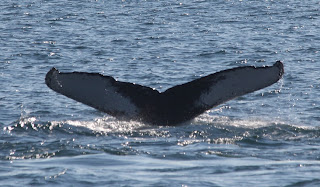 Such an awesomely calm and active day on the ocean!