Today we had two very fun and very different trips!

This morning we started off strong with a large pod of Atlantic white sided dolphins. These animals were really fun to watch as they came right up to the boat and even leaped out of the water multiple times! It has been a while since I’ve seen a pod of dolphins this active!! The pod included mothers with small calves, juveniles and adult males. The dolphins have been pretty rare this summer so this was a very welcomed sighting. 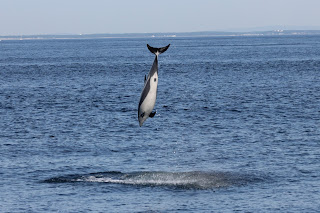 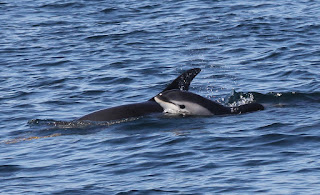 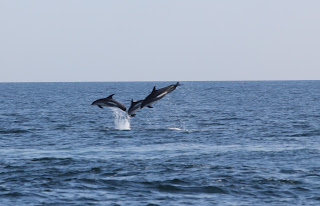 Next we got a few looks at a minke whale, and then found a humpback whale. This was Quill, who has been seen several times recently. Quill seemed to be pretty busy, and was moving around quite a bit but we did manage to see his flukes a couple of times!  As we watched Quill, a blue shark and another minke whale swam by.

Then we spotted another blow nearby. This was a fin whale!  Fin whales are enormous and as we watched this one, we saw 2 more traveling together in the area. One of this pair was identified as #0902, a whale first seen in 2009. 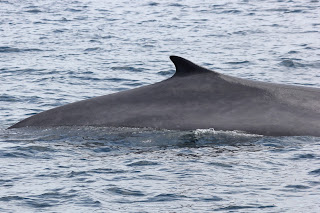 Some of our sharp-eyed passengers also got a quick passing look at an ocean sunfish as we made our way back to port.

This afternoon, we headed further east based on a report from some boats up on the northern part of Jeffreys Ledge.  As we headed to the reported location, we came upon a mother fin whale and her calf!! Fin whale calves are often curious and this one was no exception. As the mom went off to feed, the calf rolled around and spent more time swimming upside down than right side up! Then it started to almost breach out of the water- porpoising and coming up pretty far out of the water! This was so much fun to watch!! As I looked at my photos, I realized why the calf looked familiar. The mother was one of our favorites, Comet, and her active calf! We have seen them a couple times prior this summer and the calf, which is quite large for its age, had been pretty wiggly then!


As a few whale watch boats came in to check out this pair, we continued on and found several humpback whales a bit further to the east. The first was Sedge, who did a bit of tail lobbing and even a tail-breach!

Next we found Tornado, and then Hornbill!!

The whales were pretty spread out, with even  more spouts seen in the distance.  A couple of minke whales were scooting around the area too. We had to travel a bit further than the other boats, but it was well worth the ride!