What a gorgeous day on the ocean! The seas were surprisingly calm and the variety of marine life was pretty phenomenal. It’s not that often that the captain and naturalist get to drive around whales and talk about whales from the freedom of the fly-bridge (on top of the roof) but today was one of those days.  We started off by passing by a couple small pods of harbor porpoises.  Then we found our first of 3 different humpback whales. This one was Highlighter.

As we watched him surface around us, one of the tuna boats from the TV show “Wicked Tuna” passed by and the famous crew of Hard Merchandise even gave us a wave.   We just never know what we’ll see out here!  Soon we spotted other blows nearby but before heading to them, we took some time to check out an ocean sunfish. This fish was right next to the boat, and I don’t know if we should be flattered or insulted at what happened next. The huge fish decided to “relieve” itself right next to us! That was a first for me! 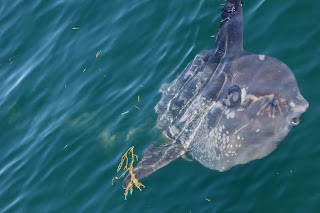 While we were drifting around, we also decided to rescue a Spiderman balloon from the ocean.  Marine debris, and balloons in particular, pose a big threat to wildlife. As we headed toward the other spouts, we found a minke whale cruising by. The spouts belonged to 2 more humpback whales, #0050 and Mogul. They were blowing bubble clouds to help capture their prey! 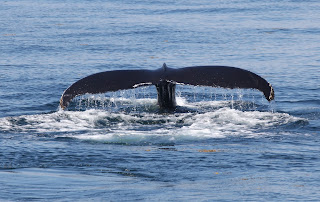 Some passengers pointed out a small harbor seal pup nearby and before we knew it, it disappeared. 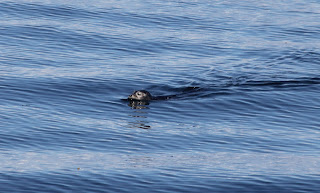 We started to check out another area on our way home and found a spout of a somewhat elusive fin whale. It would spout and then not be seen for a minute or 2, and then spout again. As we paid closer attention, the whale wasn’t being elusive at all but instead it was sleeping!  Sleeping whales are always partly conscious so they know what’s going on around them, but they move slowly and only take a breath every minute or 2. We got some incredible looks at this whale just below the surface and are still working to try to identify it. 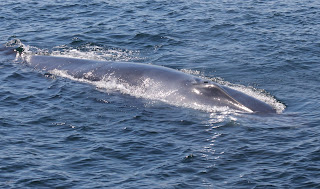 And I can’t ignore the bird life- we saw northern gannets, red-necked phalaropes, great and Cory’s shearwaters and probably some other species that I missed.

Such a marvelous day on the ocean!
Posted by Dianna Schulte, Blue Ocean Society Director of Research at 5:20 PM