The variety of life around Jeffreys Ledge is still quite impressive!   This morning we found a minke whale close to the Isles of Shoals.

Not far away, we spotted a blow. A humpback whale (named Quill) appeared and was doing some feeding indicated by the clouds of bubble he was blowing. These bubble clouds are used by humpback whales to corral their prey- pretty ingenious for a whale that needs to eat about 2000 pounds of fish daily!
As we watched Quill, an ocean sunfish came up in the wake of a passing boat.  This unique-looking fish is the largest species of bony fish and we ended up seeing 2 of them during the trip.

We spotted another blow in the distance and went to investigate. This was humpback whale #0050- one of the first whales to be identified back in the 1970’s!

0050 was also blowing bubble clouds and as we watched him Scar Minke popped up next to us!

Scar is a popular minke whale and has been seen frequently this summer, often showing up out of nowhere!   We then did a bit of searching and found a fin whale and another minke whale!

On our way home, we passed through the Isles of Shoals, ending the trip with some scenic views.

This afternoon as we approached the Isles of Shoals, we had a surprise. A minke whale surface close by and as we slowed down to get a look at it, it passed right under our pulpit on the front of the boat!  Then, just past the Shoals, we spotted a blow. This was humpback #0050 again. 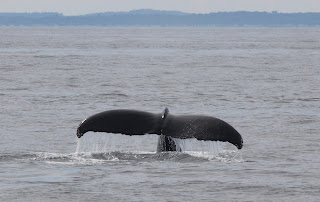 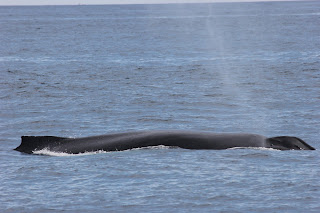 We also spotted 3 minke whales in the area.  As we passed on our sighting to some other whale watching boats, one of them told us about yet another blow a little ways away. We cruised out there to find not one but two whales- a humpback whale and fin whale!

We followed the fin whale for a bit and then went to look at the 2nd humpback whale of the trip, but we got happily side tracked by a surprise sighting of a mother fin whale with her calf!!! The calf was nursing and the pair just swam slowly alongside our boat. It was a really special sighting.  The second humpback was Quill again (seen during the morning trip) but we didn’t get too close as we were occupied with the mom and calf fin whales. This mother has not yet been identified but has an interesting scar on her side and also some entanglement scars on the base of her flukes.

We know that because we saw her flukes as she just barely lifted them to the surface. This is a very rare sighting for a fin whale!! It is said (by whom, I do not know) that a fin whale only lifts its flukes once in 20,000 dives.  Such a wonderful way to end the day!
Posted by Dianna Schulte, Blue Ocean Society Director of Research at 9:51 PM