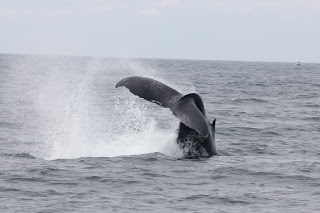 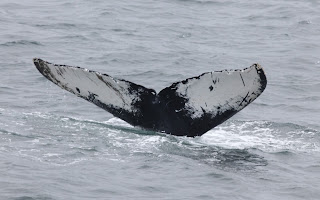 The northeast breeze and bouncy seas didn’t deter our adventurous whale watchers today. Our expert crew found 4 humpback whales, a small pod of Atlantic white sided dolphins, an ocean sunfish a harbor seal and several minke whales!  This is one dedicated crew- even one of our captains came out to watch whales on his day off! We did the math, and between the captain, two mates, naturalist and relief captain, we have 97 combined years of whale watching experience! Yes, we really do love what we do!

The morning humpbacks included Patches (who is featured on the cover of our brochure!), Mogul and Highlighter together, and Quote nearby. 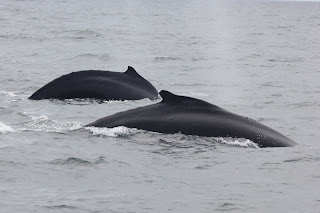 The group of dolphins was a bit tricky to get looks at but the ocean sunfish was very cooperative!  The harbor seal was snoozing at first, exhibiting a behavior known as “bottling” which is when the seal sits vertically in the water with just the tip of the nose sticking out of the water, resembling a half filled bottle bobbing at the surface! Then after it woke up, it appeared to be yawning, opening its mouth wide several times! We just never know what we’ll see out there!!
This afternoon we had to do a bit of searching as the morning whales had moved but we soon spotted another ocean sunfish and got some great views of this creature.

Then we got a report of one of our whales seen during the morning trip. It had moved a bit and when we finally found it, we saw that it was Highlighter!
This whale did a quick tail breach and then continued on with its 5-6 minute dives.  Not far away, humpback whale Quote was spotted. We got a few nice sightings of her asymmetrical flukes before it was time to head for home, but in the meantime, we also spied a young gray seal in the area as well as a quick look at a minke whale. 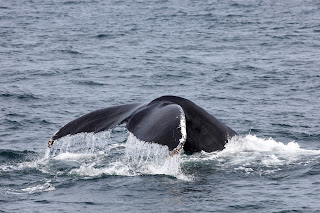 I wonder what we’ll find tomorrow!