After a bit of searching this morning, we found a couple of elusive minke whales. Although we got a few good looks in spite of the less than ideal sea conditions, we continued on and did a lot more searching and finally came up with a fin whale. But this was no ordinary fin whale. This was #0631, a fin whale first identified by Blue Ocean Society researchers in 2006. The following year, on July 14, 2007, #0631 was being watched by several whale watch boats. The interns were collecting detailed data on every single breath and dive the whale took as per usual. Suddenly, the whale watch boats spotted a sport fishing boat heading rapidly toward the fin whale. They tried hailing the vessel and even gesturing as it got closer and closer to #0631.  But the captain wasn’t paying attention and ran right over the back of #0631!  As passengers watched in horror, the whale took off but not before the naturalists could get photos of the injury. #0631 was seen briefly in 2008 so we knew it had survived the incident, but then he was not seen again until 2012. During this sighting he was seen entangled in some sort of rope. At that time, the only parts of the whale’s body to break the surface were the blowholes and just enough of the back to show that distinctive scar.  Sadly help was not available to untangle the whale and it was not seen again for 4 years. Today was the first time we were able to get close to this previously elusive whale and we were treated to some incredible looks and ID images! Check out this gorgeous chevron marking!! 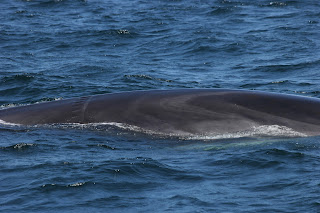 I am so happy to know that this whale is ok and doing well. Ship strikes can be lethal to whales, and we really want to reach out to boaters to let them know to always be on the lookout. Entanglements are also potentially lethal, so it is quite amazing that #0631 has survived at least two devastating events. 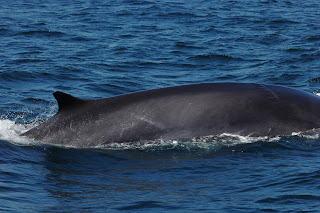 And in case you are wondering what happened to the captain of the sport fishing boat, he was eventually fined ~$5000 for injuring an endangered species. Part of the reason he was caught and fined was due to Blue Ocean Society’s detailed data collection and photos to be able to prove to law enforcement that indeed this captain violated the Marine Mammal Protection Act as well as the Endangered Species Act.  This is just one of the reasons we work so hard to collect data and study these incredible animals.
Posted by Dianna Schulte, Blue Ocean Society Director of Research at 8:30 PM