The morning trip found a very nice minke whale on our way to the Ledge. We got several great looks at this animal, with perfect sighting conditions! We could see the pointed nose breaking the surface, and even the white “minke mittens”!

We pressed on, and on, and then spotted a spout in the distance, on the southern part of the Ledge! As it turned out, 3 humpback whales were close by! The first was being a little shy, so we moved to the pair. These 2 turned out to be whales named Pinch and Sweep, based on their unique fluke markings!  Pinch had been seen in the area recently, but otherwise is a new visitor to the Ledge, not being seen in prior seasons. Sweep has only been seen here once before- in 2005!! Welcome back, Sweep! 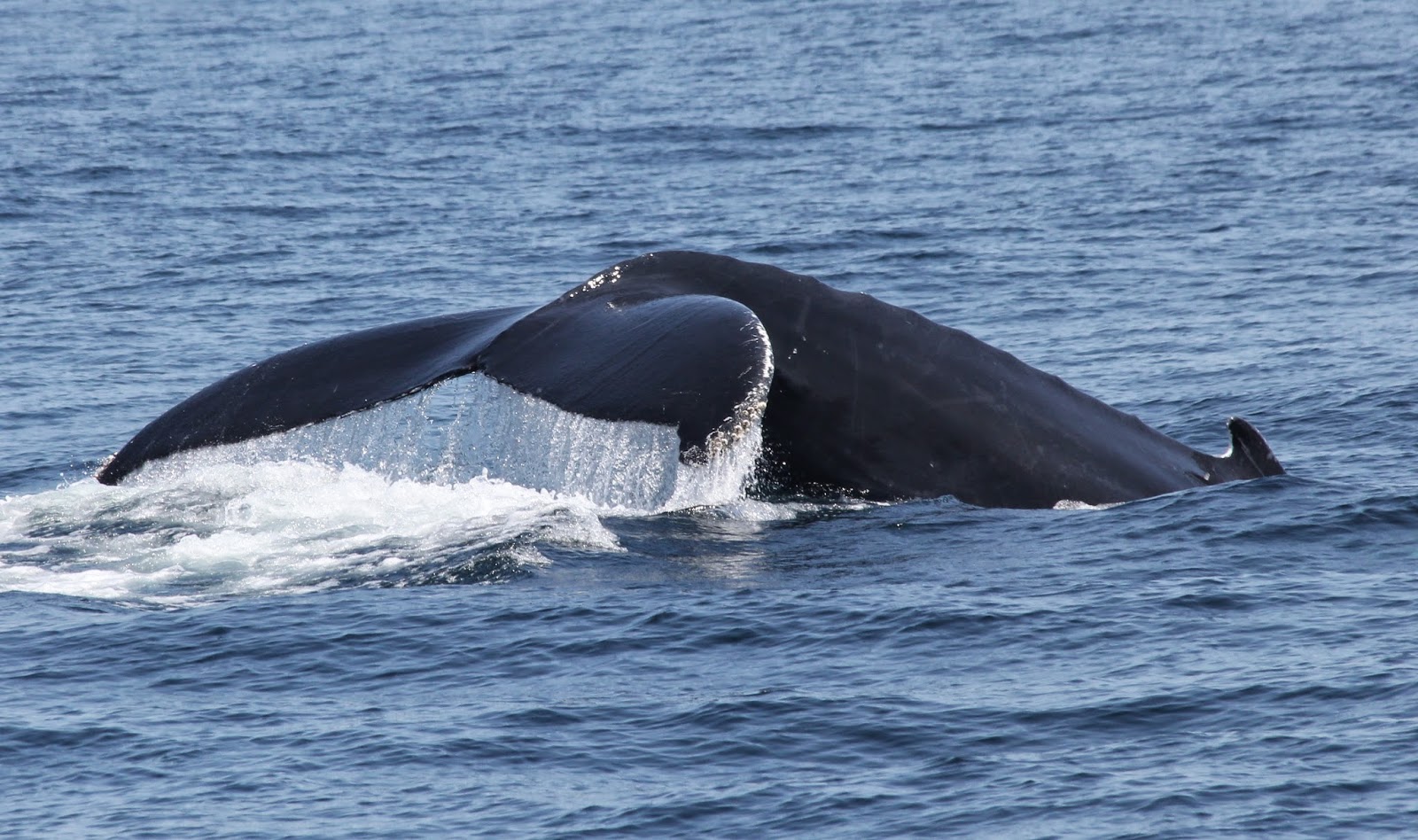 As we were following these two, we also saw a blue shark in the area!!  Blue sharks are common, but seldom seen. They can reach lengths of 5-7 feet!  Before we knew it, it was time to head for home, so we got a couple more looks at the humpback whales before heading to Rye.

The afternoon trip took us in a completely different direction- to the northern part of the Ledge!  We had heard about whales being up here from our friends on Nicks’ Chance out of Kennebunk, but that was hours before. Again, whales move around a LOT so we weren’t sure if those whales from the report would still be there. But as we approached the area, we started seeing various spouts!  We were soon in the midst of a trio of fin whales, and several humpback whales! Even a minke whale was spotted in the area!!  Two of the humpback whales, that we spent the most time with, were our old friends Clipper and Owl!! This was the first time all season that we have seen these two and we were really excited! I might have done a quick happy dance in the pilot house as soon as we could tell who these whales were!


We obviously love seeing whales, no matter who they are, but there is something really special about seeing a whale that you know, and have been watching each year for 20+ years!  As I mentioned during the trip, whales face a lot of threats on a daily basis- entanglements, ship strikes, ingesting trash, noise, etc.  We are always so excited to see “our” whales return to the area after a long winter migration, dodging those threats all the way.   Owl is also one of Blue Ocean Society’s adoptable whales, so that made the sighting even more special!   It was kind of like going to a family reunion today!

We did see more spouts in the distance that looked a little different. We found 4 fin whales on the outskirts! One was alone, and 3 were together, which is a little rare for this time of year!!  We didn’t spend too much time with this trio as we were getting short on time but will try to ID these animals soon and will certainly post the updates here.


What an awesome day with calm seas and cool breezes! We can’t wait to get back out there tomorrow!