What a day! 4 species seen on each of our trips today!

This morning we came across some harbor porpoises pretty close to the harbor (hence their name “harbor” porpoises). These little guys were pretty quick at the surface and a little bit shy.  As we continued on, we saw some more little splashes in the distance, but these weren’t more porpoises. Instead, these were Atlantic white sided dolphins!!  We haven’t seen dolphins since June, and this was only our 4th day with dolphins, so we all were pretty excited. And the dolphins did not disappoint. They were right alongside the boat, playing in the wake and zig zagging across the bow! We saw lots of mothers with their calves, along with some pretty big males.  We estimated seeing about 100 dolphins in this pod! It was fantastic! 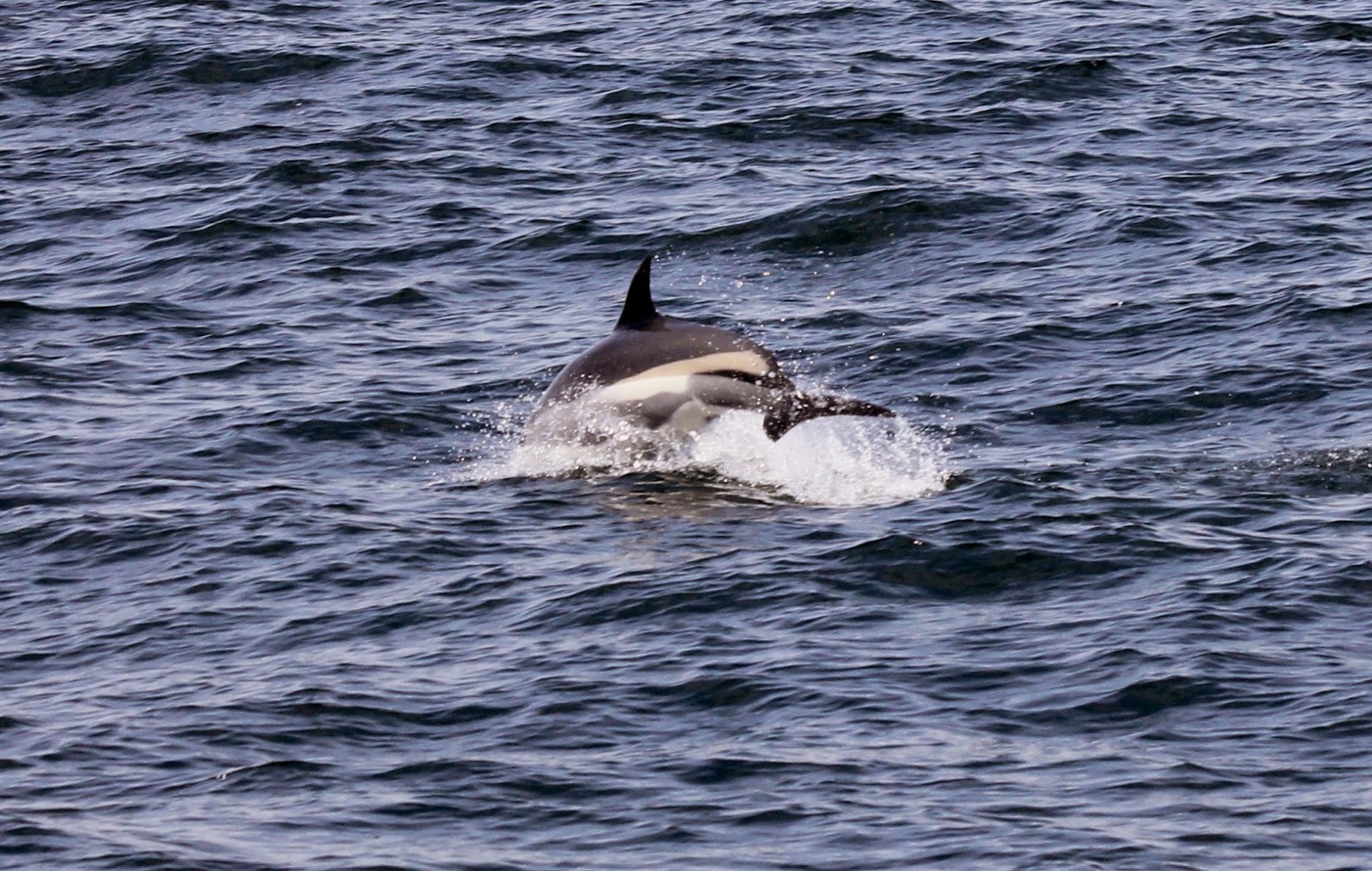 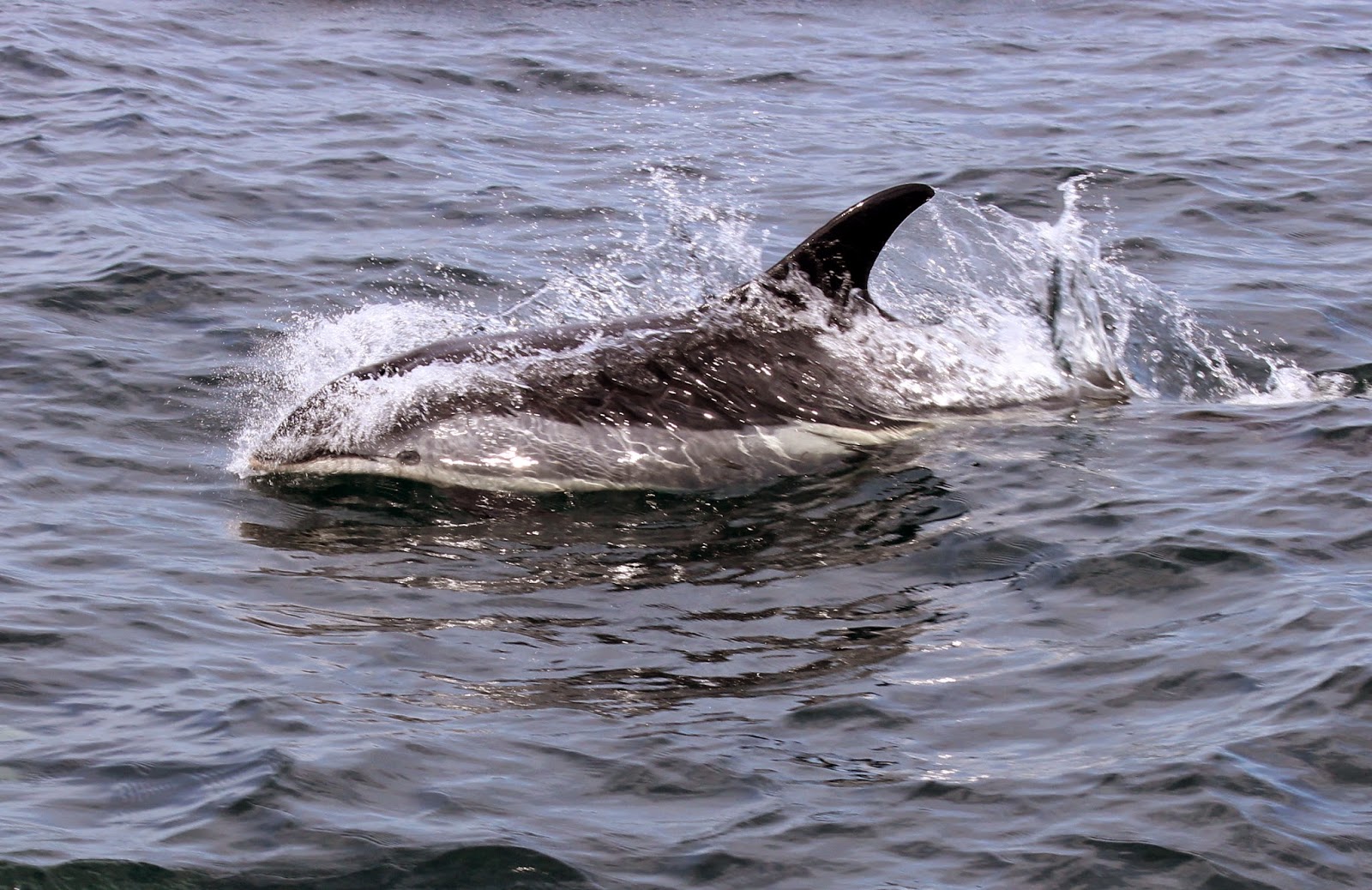 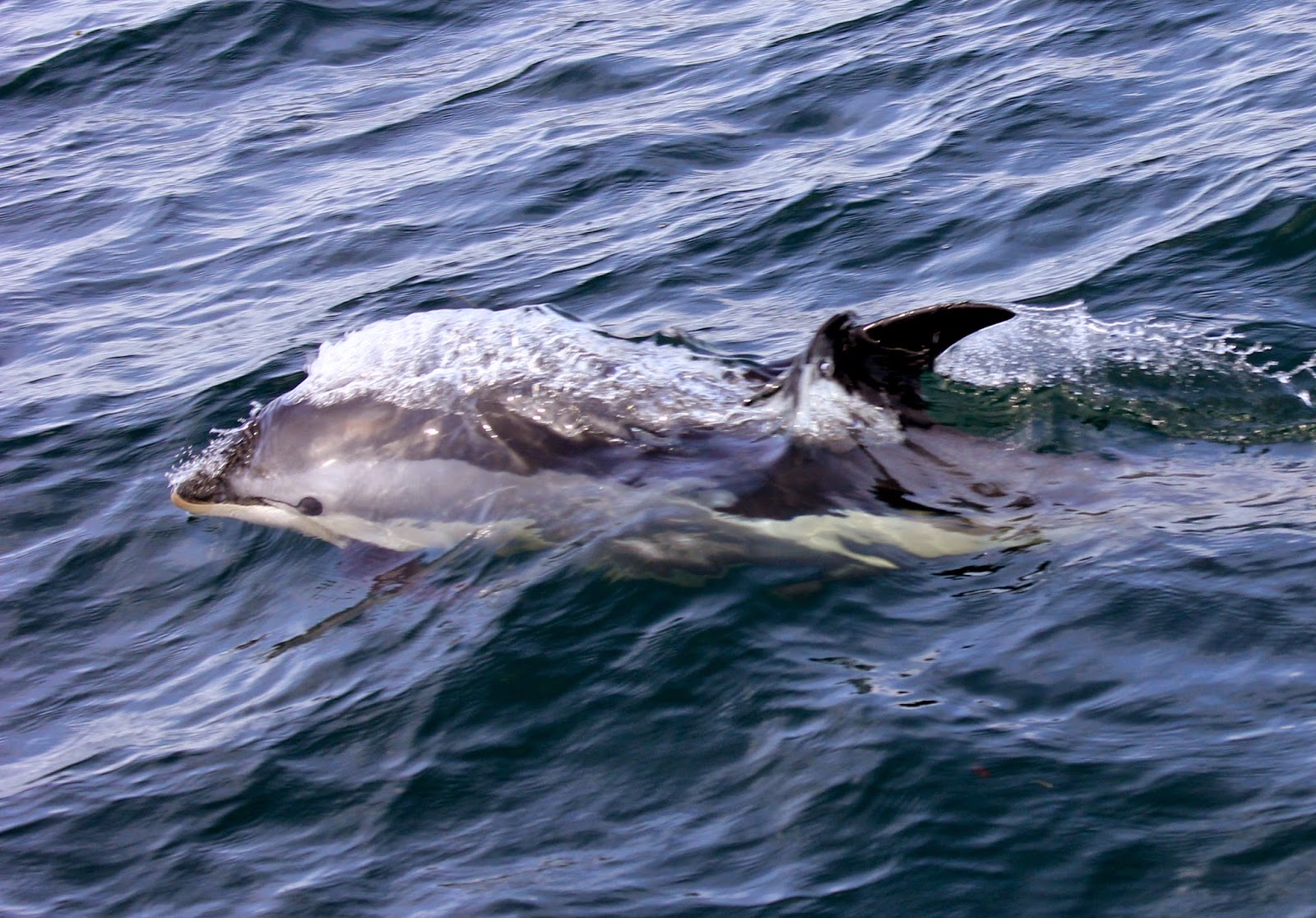 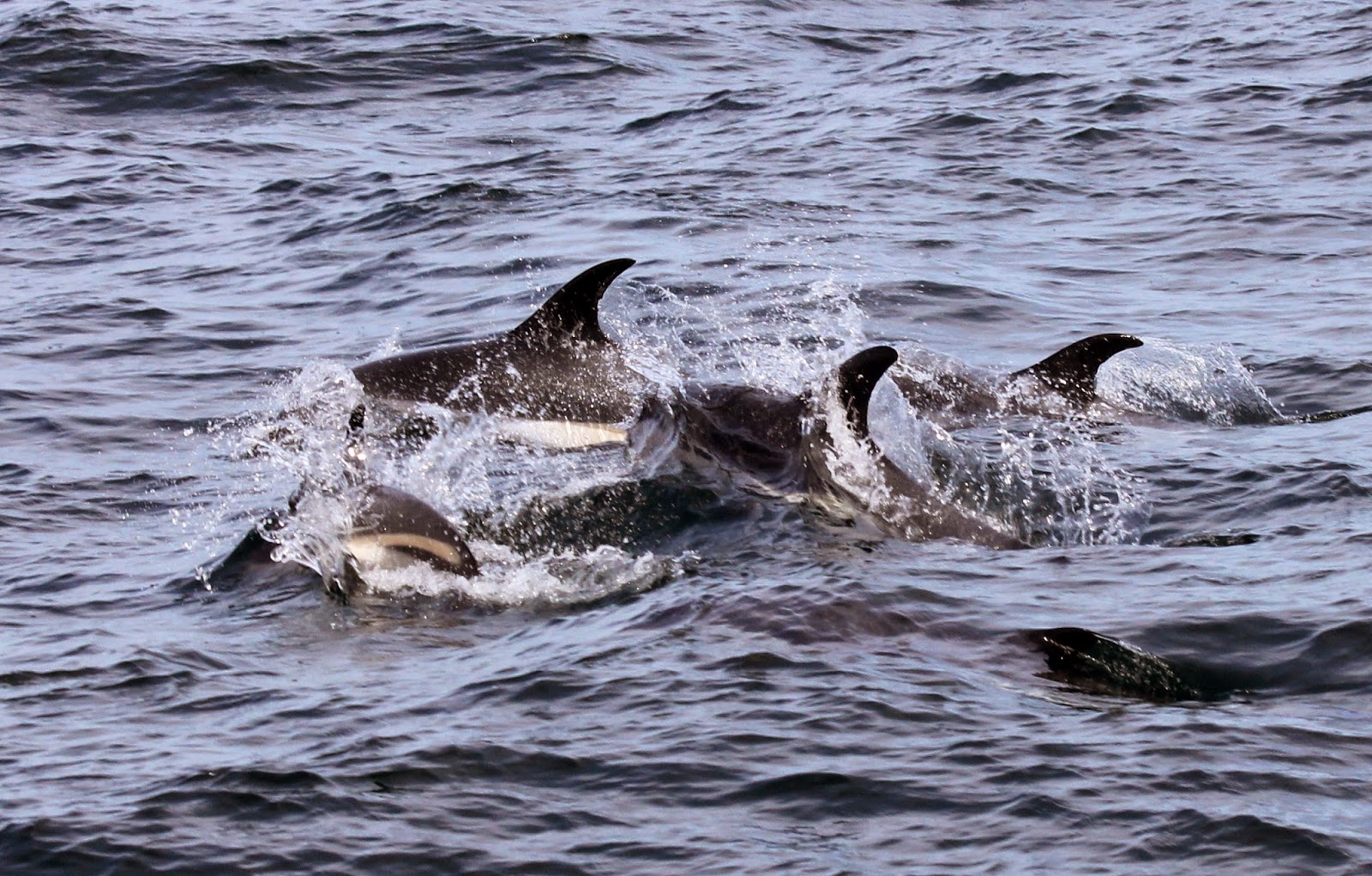 Next we ventured on to find a couple of fin whales along with a couple of minke whales. The minkes were a bit elusive but we had some incredible looks at the fin whales, one of whom was identified as “Crow”. We are still trying to determine if Crow’s friend is in our catalog or not. And I’ll post and update if I figure that out soon.  Fin whales are huge, so to see two together was great! They surfaced really close to us as we just sat and waited for them!

This afternoon, we found a surprise minke whale just a few miles from the harbor, before we even got to the Isles of Shoals. This whale was great and surfaced close to us several times before we decided to move on and search some areas further offshore.

We did see another minke whale offshore, but this one wasn’t nearly as cooperative as the first so we kept on searching. Whales, like any other form of wildlife, move around quite a bit and are rarely seen in the exact same spot, so we were putting our whale-finding abilities to the test. It seems the area was a bit quiet this afternoon, even with 4 whale watch boats searching. Finally we heard from one of the boats that they had found 2 fin whales. These turned out to be the same pair that we saw this morning- Crow and his friend!

As we waited for the boats to get their looks (they had to leave before we did and we don’t like to over-crowd the whales), we saw an ocean sunfish close by! This one was pretty dark in color and also quite active.  Also as we stood back and waited, giving the other boats their time with the whales, the whales decided to come up close to us!  It was awesome! The two big fin whales cruised right alongside us!  As the afternoon progressed, we were able to get more good looks at the second largest animal on Earth. But soon it was time to head home. Just as we were getting our last looks and about to head to Rye, we saw some little splashes not too far away. Atlantic white sided dolphins again!! 2 pods in the same day!! 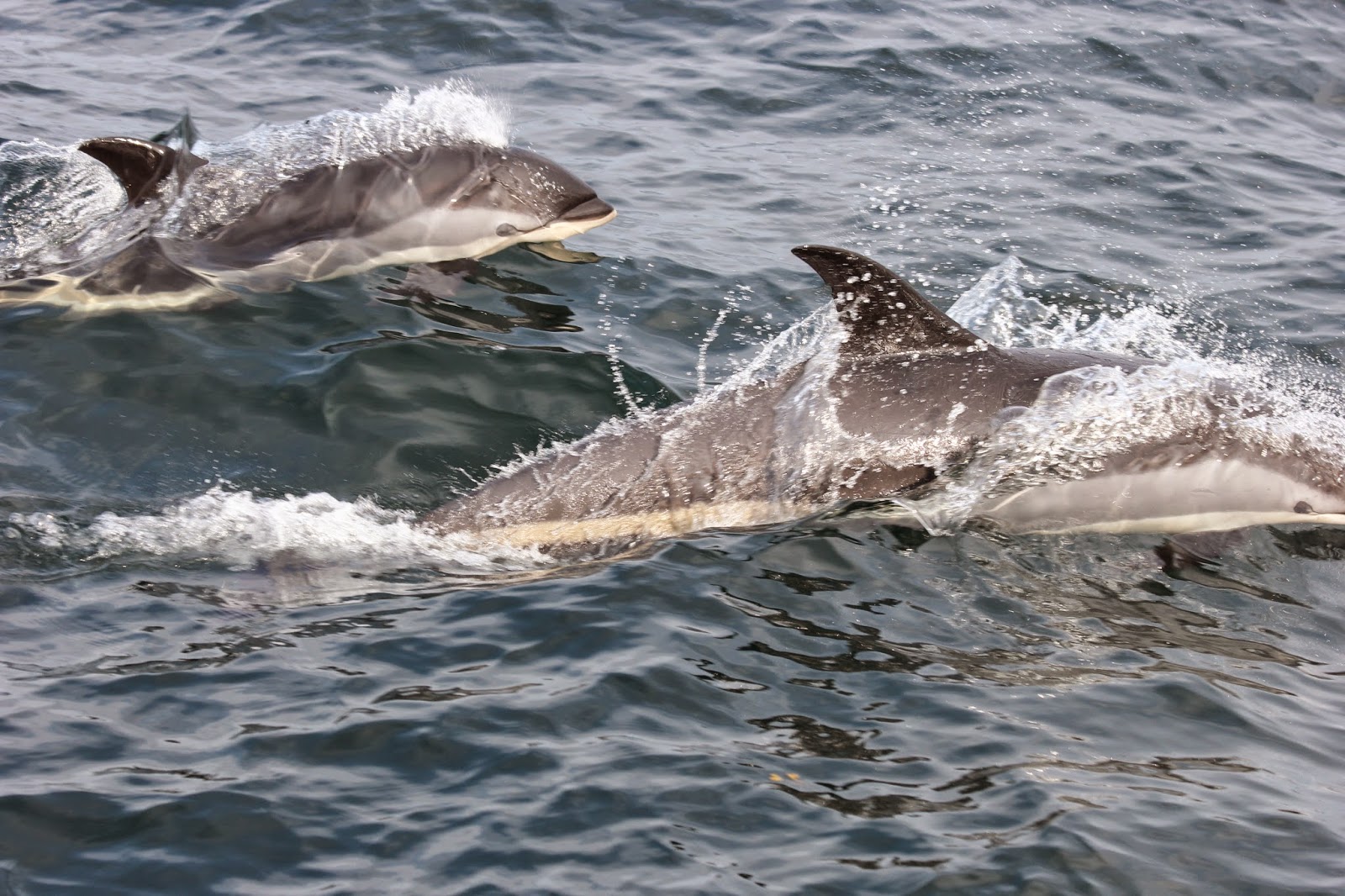 Again, the dolphins have been quite sparse this season for reasons which we still don’t know. This was my first day with dolphins all summer! (And just as a reference, I have worked over 50 whale watches so far since May!) These animals were incredible, jumping up high out of the water over our wake, and coming in really close to check us out!   We like to refer to the dolphins as “instant happy”! How can anyone be unhappy when watching a free-swimming, wild dolphin frolicking in the ocean waves?? Such a great ending to our day!
Posted by Dianna Schulte, Blue Ocean Society Director of Research at 9:07 PM