Land temperatures were toasty today so hopping on board with us was a great way to sneak away from the humidity today. This morning we got a chance to check out Pinball. This whale has been seen very consistently in our area since June 24, which was her first sighting on Jeffreys Ledge this season. Not sure how much longer she may stick around (whales can easily move along at a moment's notice!) but it certainly has been wonderful seeing this adult female spend so much time in our area.

While watching her we also spotted 3 Minke whales cruising around the outskirts of the area this morning.

This afternoon we were headed back to where Pinball had been seen when we were diverted over and over again, thanks to our friends on of the Atlantic Queen II. First, we spent time with 40-50 Atlantic white-sided dolphins. What a wonderful way to start a trip!

We left our toothed-whales to venture further offshore when soon enough we were waiting for a Fin whale to resurface. We managed to get a few quick looks at this whale as it appeared to be doing fairly large circles around the area.
From there it was another species, a Humpback whale. But it wasn't Pinball from our morning adventures. It was another familiar whale, Hornbill.

Did you know Hornbill was first sighted in the Gulf of Maine in 1977? That makes this whale at least 38 years old!
Along our travels offshore we saw a couple of Minke whales but, our last sighting of a Minke this afternoon was by far the most spectacular even if it was out in the distance. On our travels home we watched a Minke whale leap out of the water 8 times in a row! This whale was literally launching its 16,000+lbs body out of the water! Incredible.
It was a great day to spend time on Jeffreys Ledge with some great looks at wildlife and as always, we hope to have added some special moments and memories to all who join us. 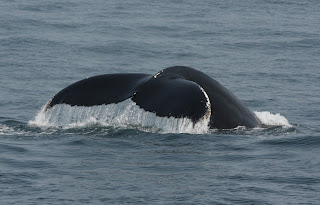