What a day! From start to finish, we were treated to the fantastic lives of wild animals.

The morning trip started with a spectacular breach from a humpback whale named Quote. She then began to flipper-slap, showing off her 15-foot-long flipper! 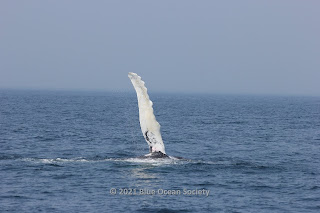 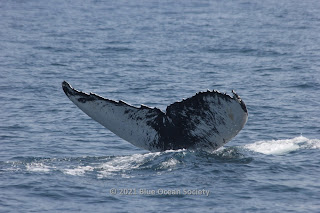 Not far away, we encountered a pair of humpback whales. This sighting started off like any other; the whales took several breaths and then dove. As we sat idly waiting for them to return to the surface, I was searching out the port window. Suddenly, I heard what sounded like our big cooler of ice sliding across the pilot house deck, but 10 times louder. I quickly turned to see a black mass slowly moving by just outside the starboard pilot house door. Jawa, the humpback whale, decided to check us out! This adult whale swam down our starboard side, inches from our boat!  But the whale didn’t stop there. The next thing we knew, it was at the back of the boat lifting its head up seemingly to get a look at the strangers in its habitat. Then Jawa lowered its head and gracefully swam under the boat without touching it. Even after 20-something years of watching whales, I am still surprised at their grace and self-awareness.  Jawa’s companion, who I later identified as Frost, then surfaced close by, but Jawa was still curious. 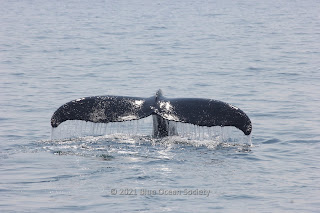 Approaching the side of the boat head-on, and then rolling on its side, we could see its eye, albeit closed in the bright light. Frost hung back while Jawa was again inches from the hull.  The pair dove below the boat, surfacing on the opposite side, and then lifted their flukes in the air, going down for a deeper dive. The entire crew was in awe of what we just witnessed, and I was at a loss for words to describe it, other than that it was an incredible experience that is extremely rare.

We moved on to another pair of humpback whales, Spoon and Half Moon, who were lounging at the surface doing a bit of napping.  Not nearly as exciting as Jawa and Frost, but more typical behavior. After they dove, we headed for home.

But our trip wasn’t over yet. We stopped on an ocean sunfish briefly, and then encountered a large pod of Atlantic white-sided dolphins on our way home!

As we boarded for our afternoon trip, the crew was still floating on air after the morning experience, but we knew we wouldn’t be able to top it. Every trip is different, and we know not to have any expectations from day to day or even from trip to trip.

A spout in the distance brought us to another humpback whale known as Gondolier. This trip took us fairly far from home, so it was time to think about heading for home.

We saw another spout nearby and decided to check it out before heading back to Rye Harbor. As we waited for this whale to fluke, we saw Gondolier breaching in the distance! Whales occasionally breach for extended periods of time but we always expect that when we get close, they will stop. Murphy’s Law, right? Well, he did stop breaching, but then was flipper slapping, tail breaching, and tail lobbing!

We don’t know why whales do what they do. The more active behaviors may have to do with communication, and the curiosity behaviors are just that- curious.

On the ride home we encountered a brief rain storm, but no one seemed to mind after the trip with such an active whale!

Thursday’s and Friday’s trips are canceled due to poor weather (the effects of Tropical Storm Elsa), but we look forward to getting back out there on Saturday!