Saturday, July 17, 2021
Saturday morning’s trip, we headed out to where we have been seeing whales lately. The first of several humpback whales we found was one named Wigwam. We also saw Owl, Clamp, and Satula! These whales were all moving in various directions, apparently feeding on herring. Humpback whales don’t travel in pods but often times we will see several in an area when the baitfish (like herring) are plentiful. Several tuna-fishing boats were also in the area. Bluefin tuna also feed on small baitfish- the same fish that the humpback whales like to eat! A couple of minke whales passed by and we got a beautiful look at the unique markings of one of these little (25-foot!) whales.

Saturday afternoon, we headed back to the same area where we found whales on our morning trip. But well before we got there, we found a pair of ocean sunfish just a couple of miles from the harbor! Further offshore we found some humpback whales including Clamp, Satula, Quill, and Owl! A couple of minke whales were darting around as well. 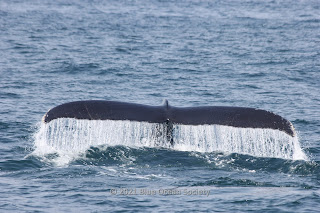 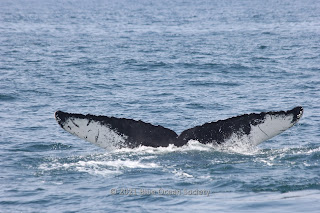 Sunday, July 18, 2021. As we were boarding for our morning trip, a few small showers passed by giving the boat (and us) a quick freshwater rinse. Fortunately, the rain stopped, but as we left the harbor, the wind and waves were tossing a different type of water our way. Saltwater. We knew we would experience some rain and leftover chop from the early morning storms, but the forecast was for it to quiet down quickly with little to no wind by late morning. We all know that weather forecasts and reality are two completely different things. Today was the prime example of that. The ocean gave us several “kisses” as we headed out to an area where whales have been seen recently. Upon arrival, we five or so humpback whales all spread out. One whale, named Satula, tail-breached a few times, while another whale in the close distance fully breached from the water! Owl, another humpback whale surfaced alongside Wigwam for a brief moment before heading off on her own. 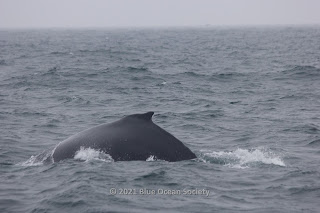 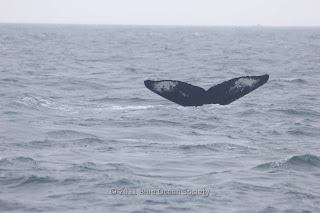 The Sunday afternoon trip was still on the choppy side but we maneuvered the boat to make the trek out to the whales as comfortable as possible. Satula and Wigwam were seen again, as well as Clamp! Owl was still in the area but not observed close by. A minke whale jumped in the distance but that was all we saw of that animal. Even with less than perfect weather conditions, the whales are still here and they don’t seem to mind the rainy days at all! 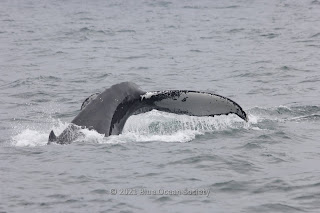 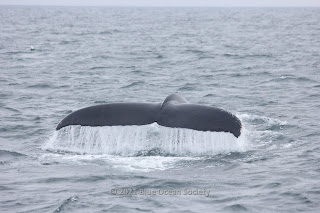