No trips occurred on Monday so we were eager to get back offshore on Tuesday. In the morning, we saw a total of seven minke whales and spent time with three humpback whales.

Most of the morning our engines were shut off as whales alternated surfacing on either side of the boat. Blue Ocean Society adoptable whales Owl and Satula were seen along with Wigwam.

The afternoon was more of the same: sit tight and watch the whales surface around us. On the afternoon trip we saw a minke whale before finding four humpback whales. Along with Owl, Satula and Wigwam, we saw Quill moving through the area. 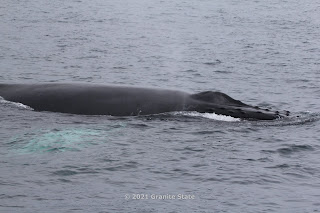 On Wednesday we were surrounded by fog, a phenomenon we have been lucky to avoid for a while. Our searching efforts were in full-effect in anticipation of finding whales. Eventually, it happened! Owl the humpback whale was sighted and ultimately was circling around the area. A grey seal even surfaced at one point. On Wednesday afternoon, the visibility slightly increased. Not only was Owl sighted but so were humpback whales Clamp, Satula and Wigwam. 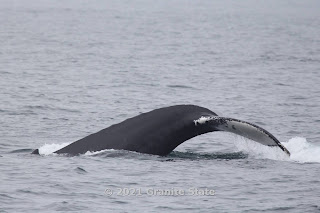