On Monday's trips there were plenty of whales to look at. Each trip provided whales nearby as well as out in the distance. Seven humpback whales were sighted on both trips. In the morning, we had a 'surprise' visitor; a fin whale! It's been weeks since the last time a fin whale has been sighted, which is odd when you think about the fact that fin whales eat similar food that humpback whales eat! A welcome whale for sure.

During the afternoon trip on Monday, in addition to the numerous humpback whales, a small pod of Atlantic white-sided dolphins were seen, an ocean sunfish and our first turtle sighting of a season- a loggerhead! Unfortunately, the turtle was shy and slipped under the surface quickly but what a fun find to come across.

The ocean was flat calm all day on Tuesday- perfect for sighting whales! Once again, both trips provided ample sightings near and far. In the morning, seven humpback whales were sighted and a few minke whales. On the afternoon trip, eight humpback whales were sighted. Sometimes the whales would circle around near the boat. During other instances, the whales would scatter making it interesting to decide which direction to go next. Nonetheless, gorgeous scenery to be surrounded by. Morning whales included Sedge, Wigwam, Badge, Quill, Jawa and Owl. Afternoon whales included Wigwam, Owl, Clamp, Quote, Jawa, Satula and Badge. 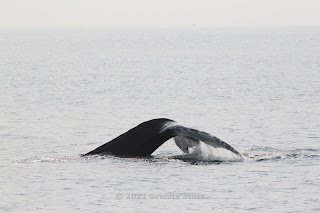