Another picture perfect day was on tap as we left the harbor in the morning to search for whales.  We started only about 3 miles from Rye with a very unique Minke whale.  This particular minke whale las left without a dorsal fin after some type of human interaction.  We actually saw this whale last season and the wound was quite fresh with pink flesh showing through and white tissue along the edges, showing us that the wound was starting to heal.


We saw this whale again today and the scar is all white now, showing us that it has healed up quite nicely.  We are just very happy that this Minke survived to tell its story and that it swimming around with no problems.

We continued on past the Isles of shoals and headed towards an area where other whale activity was spotted late the previous evening.  Its always a chance you take in searching an area 12+ hours after a sighting, with no guarantee those whales would still be offshore on Jeffrey's Ledge.  But, it was a beautiful day and the conditions could not have been better for sighting whales.  Throughout our travel, we saw a total of 8 different Minke whales and as we started to run out of time for further exploration offshore, our Captain spotted a spout from a whale about a mile away.  We were very short on time, but really wanted to see what was there.  As we approached, the whale started to go on a deeper dive raising its tail high above the water's surface.  It turned out to be a male Humpback whale named Hornbill, first identified in 1977.  Even though we had a short period of time to spend with this whale as it had taken us 28 miles from Rye harbor, it was great to know that Hornbill was back on Jeffrey's Ledge continuing to feed

In the afternoon we started to head slightly South from where we had left Hornbill in the morning because he started heading in that direction when we left him.  We also had 2 other whale watching boats scoping out the area as well and since we all try to cover different areas, we decided to all spread out in our search for Hornbill.

As we were traveling, we received reports of whale activity in a different location, so we adjusted our course and we were lucky to find a very nice pod of toothed whales, Atlantic white-sided dolphins.  This pod was milling around the surface and stayed close by the boat.  We were able to spend quality time with them and it was great way to start our trip. 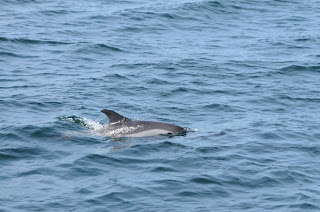 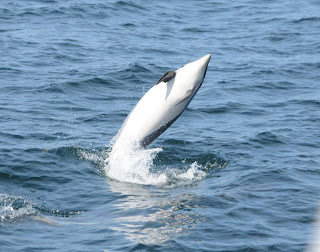 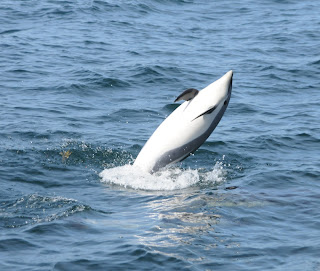 We then started back on our search for Hornbill and other whales that may have moved into the area.  We were once again surprised by 2 different Ocean Sunfish as we travelled along, including one of them that came clear out of the water!

They are such unique creatures and may be one of the most bizarre things you get to see when out on the ocean. 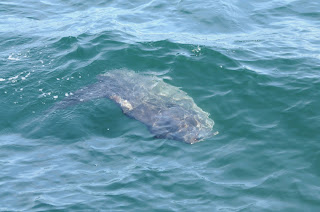 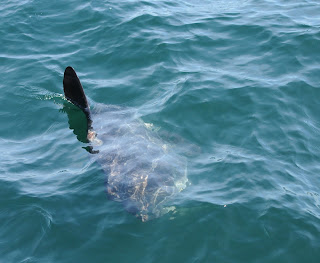 All 3 whale watch vessels, including us, searched as much area as possible in hopes of relocating Hornbill, but came up short.  We all however found our own whales to look at and we were pleased to have found
some toothed whales to enjoy during our afternoon.  Every trip is truly a new experience and we look forward to what tomorrow may bring.