The morning trip was cool and calm. Before reaching Jeffreys Ledge, we got some quick looks at a blue shark and a minke whale. We found a young humpback whale first. This whale only showed us a little of its fluke, so we could not identify it (it may even be too young to be in our catalog!). We noticed some splashing in the distance while our humpback was below the surface, so we headed in that direction and found a pod of Atlantic white-sided dolphins! There were a few calves in this pod! These dolphins were active, darting around the boat and even leaping out of the water. 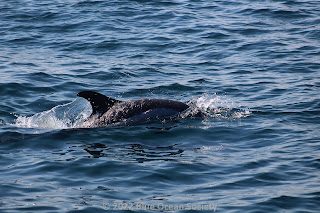 After leaving the dolphin pod, we tried to find our first humpback again but were unsuccessful. We then traveled a bit longer and came across what we thought was a single humpback, but to our surprise, it turned out to be three! We identified these three whales as Ravine, Spoon, and Spoon’s 2022 calf! We witnessed the calf nursing under Spoon while Ravine took a few naps! There was also a fourth humpback in the distance, and she eventually joined the group of three. This was another familiar whale to us: a female named Jabiru. Jabiru had a calf just last year. These four whales were slowly swimming along, and then Ravine started flipper slapping. This behavior continued even as we left the area. 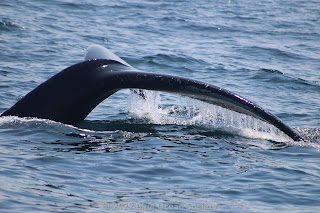 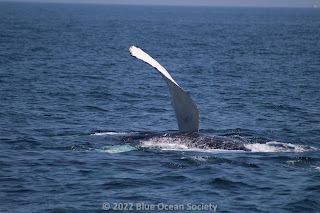 We also spotted a harbor seal just outside the harbor on our way back in. What a great way to finish our trip!

This morning’s trip was amazing! We saw Atlantic white-sided dolphins, a fin whale, humpback whales, distant minke whales and harbor porpoises, plus an ocean sunfish. All in all, the species tally was pretty typical, but the fantastic parts were the behaviors we witnessed.

A couple dozen dolphins were hanging out with the fin whale, showing up just before the huge fin whale broke the surface! Our data shows that only about 1% of fin whale sightings have dolphins associated with them! Super cool! 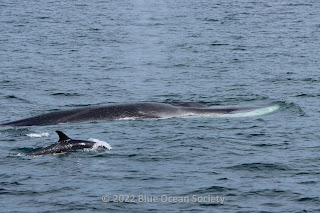 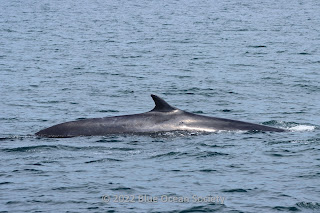 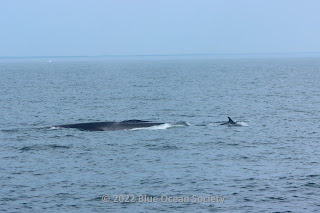 We saw a large pod of dolphins nearby and spent some time with them. 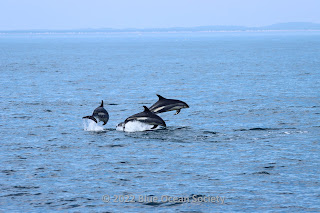 An ocean sunfish was in our path to the ledge so we stopped to take a quick look. 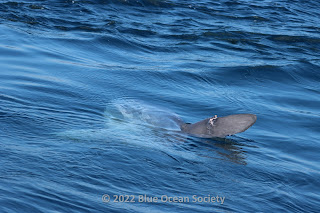 As we approached the Ledge, we saw some blows in the distance- a trio of humpback whales! These three were taking a nap and we shut down the boat to minimize the noise disturbance on these sleepy whales. 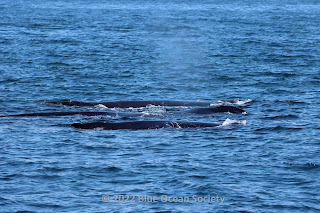 Before leaving for home, we saw another humpback in the area. This was Dross! 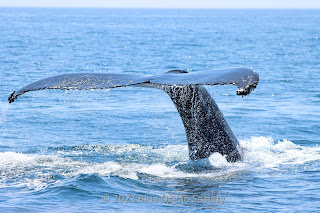 On Friday afternoon the wind picked up a little, but that didn’t stop the whales! We got quick looks at a minke whale before finding a humpback whale named Dross. Dross was busy feeding on the plentiful bait around us. She made several bubble clouds close to the boat and gave passengers some wonderful looks. 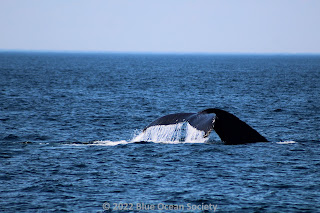 After leaving Dross we came across a trio of humpbacks. This turned out to be Spoon and her 2022 calf traveling with Jabiru. A few times Jabiru and Spoon’s calf were at the surface together while Spoon was still below. All three whales spent a good amount of time at the surface, slowly moving along and taking quick cat naps. It was great to spend time with all four of these humpbacks! 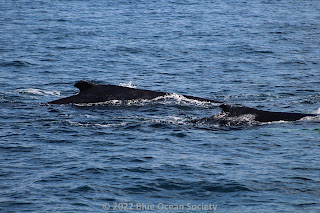 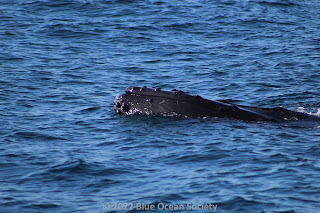 Posted by Dianna Schulte, Blue Ocean Society Director of Research at 11:00 AM