An influx of new humpback whales has arrived! As usual, right around Labor Day, we tend to see new humpback whales in our area, along with some of the ones we had been seeing regularly. This trend seems to be somewhat new (last 5 years or so) but we’ll have to do more data exploring to know for sure.

Thursday morning, a pod of Atlantic white sided dolphins greeted us as we approached Jeffreys Ledge.  This was a very compact pod of around 100 dolphins, all coming up together or so it seemed.


Next we found two humpback whales, Spoon and Nile who were a little sleepy to begin with but then gave us a taste of what humpbacks can do: Spoon began to slap her flippers on the water while Nile decided to tail-breach and then lob tail- slapping her flukes on the water repeatedly!


A bit further out, we found another pair of humpback whales, Valley and her calf.


A minke whale was also seen cruising through the area on this overcast morning.

Thursday afternoon, Valley and calf were still in the area so we hung out with them for a bit.


Then we moved on to a trio of humpback whales, Spoon, Nile and another whale yet to be identified!  This trio was snoozing (logging is the technical term).

We went out searching for another whale that we had seen from a mile away but never found it so we came back to the trio of humpbacks. But now the group had changed up! Valley and her calf joined up with Spoon and Nile, and the unknown whale was nowhere to be seen!

Then as things progressed, Spoon was with yet another humpback whale who is still unknown to us. Such a day of the old switcheroo!

Friday morning we found a whale taking long dives and not fluking very high. We had no idea who this new visitor was but later in the day identified it as Osprey, a humpback whale that hasn't been seen in our area since 2012. 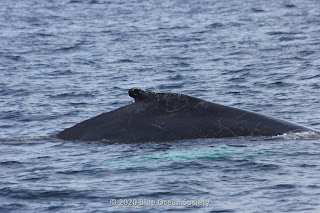 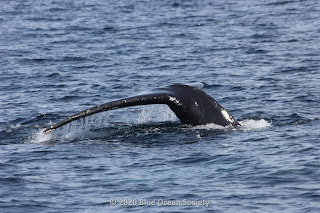 In the same area, we found another whale, the famous OWL! Owl had been seen most recently by Bar Harbor Whale Watch in Canadian territory less than a month ago! So glad to see that she has moved into our neighborhood!! We love Owl!  Osprey and Owl associated briefly but then went on
their separate ways.
A couple of minke whales were also seen cruising through the area before we came upon a trio of humpbacks, Valley, her calf, and Nile!  These three were napping yet moving ever so slowly. Such a great peaceful viewing of 3 wild animals right alongside our boat with not a care in the world!
We also had to chance to see a giant bluefin tuna that was caught by one of the boats in a fleet of about a dozen. That's one big fish! 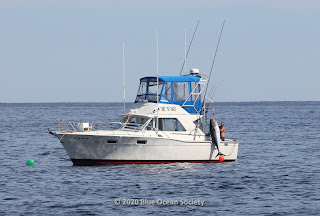 On our way home we passed by a pod of about 12 harbor porpoises!!

Friday afternoon, Spoon the humpback whale was seen again! She was much more active than she has been over the past few days. She was blowing bubble clouds to corral her fish and charging through the area!

The long-diving humpback seen in the morning was seen again and this time we got some identifying looks at its flukes- this was Osprey, a humpback whale who has only been seen once in this area prior (2012)! The whale’s tail had darkened a bit over the past 8 years but was still distinctive enough for us to figure out who it was (after a bit of effort)!!
Owl was seen again! She was taking short dives and sticking to a small area, making for easy viewing.


Just a bit away we saw splashing- Valley and her calf were still around but now they were tail lobbing and tail breaching!! Of course when we approached, they stopped all the fun activity, but we were excited to see that Nile had once again decided to join the pair!


The past 2 days were really a treat for whale watchers. So much activity was seen and the weather was pretty nice!