Thursday morning, a stunning sight greeted us on the horizon. The Grand Banks fishing schooner, Roseway, was in full sail! Built in 1925, she was quite the sight to be seen nearly 100 years later on a beautiful day in the Gulf of Maine! Learn more about Roseway here!

As we approached Jeffreys Ledge, we saw a blow in the distance. As we got closer we could see that we had not one, but two whales! Humpback whales, Valley and her calf, were still in the area, and the calf was once again quite playful!

At first, a few Atlantic white sided dolphins were with the pair, but they soon moved on.  Eventually, we also moved on to explore other areas. Unsuccessful in our venture, we circled back around to get a last look at this pair. More dolphins had joined them, making for a some beautiful last looks.
On our way home, we heard a Coast Guard broadcast of a deceased whale in the area. It was on our way home so we investigated. Sometimes reports can be very wrong (many ocean sunfish have been reported as "injured whales").  Approaching the area, we saw the reported animal and moved in to collect photographic evidence for species verification as well as possible signs of cause of death. Always sad to see a whale that has moved on, this is a part of life and we wanted to do our part to contribute to the science surrounding the demise of this whale. Unfortunately, this whale had been deceased for quite some time. The species couldn't be identified based on the advanced stages of decomposition. A few rib bones and vertabrae were really all we could discern from the floating remains. I'll refrain from posting the gory images here.  Let's just say that it wasn't pretty!

On our way home, we passed by a minke whale and an ocean sunfish!

Thursday afternoon, more humpback whales moved into the area. Ravine was the first to be seen!

She was escorted by a small group of Atlantic white sided dolphins!
Further along, we saw more blows in the distance. Several more humpback whales were in the area! One was taking 17 minute dives! Ugh. Still not sure who this whale was.

But then we found a pair of females, Clipper and Dash Dot! These two were coordinating their dives and taking fairly short dives! 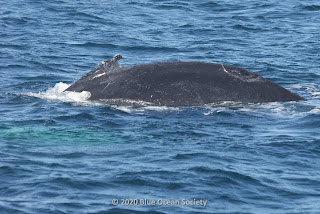 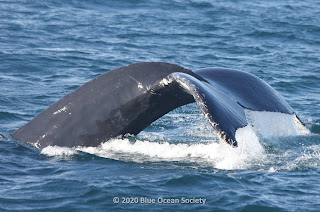 Another pair of humpback whales was seen just to the east and another single to the west. Time was running out so we had to begin our trek home.

Friday morning, we found Ravine once again by herself.  When we first arrived, she tail-breached! Then she busied herself with some feeding on the bottom. How do we know this? At one point, she happened to be directly below us where our "fish finder" was marking not only the fish, but also the whale! Super cool!!


We watched Ravine for a bit before searching around for other whales. Soon after we made the turn for home, our mate spotted a blow in the distance. This turned out to be a fabulous sighting! Not only did we find a mother and calf pair of humpback whales, but they were being escorted by not just our usual Atlantic white sided dolphins, but also a small group of common dolphins (which are NOT common in our area)!  A mixed species pod of dolphins is incredibly rare around here!!  Such a great sighting! Unfortunately, we did not completely realize the amazingness of this sighting until later that night, going through all the photos. I recall during the sighting, I said to our captain, "Wait, are these common dolphins??" We both looked again and determined that they were indeed white sided dolphins based on the multiple stripes along their sides. But photos don't lie! Common dolphins we here too!!
Zooming in on the photos verifies the species: Atlantic white sided dolphins below:


And here is the zoom of the common dolphins: 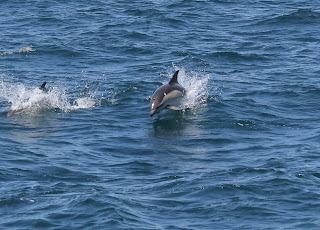 Valley and her calf seemed unimpressed with the the variety of escorts with them.
Friday afternoon, our first stop was on a large ocean sunfish! This was one of the bigger ocean sunfish we have seen this year! It swam around the boat, seemingly checking us out!
We then got a report from another whale watch boat of some whales a little further out. There, we found Ravine again, but this time she was hanging out with Clipper! (Yesterday Clipper was with Dash Dot.) Before we knew it, Clipper tail breached and soon after, Ravine completely breached!  What an amazing sighting!
The pair then simmered down and went back to "normal" humpback behavior: breathing and swimming.
Before we knew it, it was time to head home. I have to say that my favorite (yet slightly disturbing) question of the day was from a young girl who asked if humpback whales were edible. !!!!????!!!! That was a first for me!