Lots of diversity on the Ledge today! Several minke whales, three fin whales, a humpback whale and even some harbor porpoise were spotted on the morning trip.
Although the fin whales were a bit elusive, we were surprised to see two of them together since fin whales are often seen alone.
Hornbill the humpback whale was awesome as he surfaced close to the boat repeatedly! His long white flippers were clearly visible just below the waves. 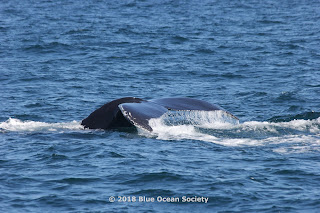 Hornbill above and below 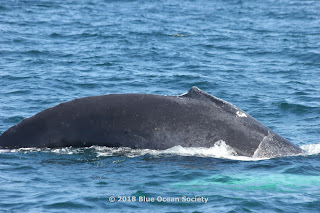 The seas improved over the course of the trip, and even on our way home, we passed some harbor porpoises and a small minke whale close to shore!

This afternoon, we located the pair of fin whales again, and yet again, they were on the aloof side, not allowing us to get any looks at all. Whales will be whales! Hornbill the humpback was also seen and after a bit of running around, he settled into an area where he was deep-feeding by blowing bubble clouds to condense his prey. Although he wasn’t lifting his tail much this afternoon, we did get to see it a couple of times!

A harbor seal surfaced close to the boat and it was soon joined by a great shearwater that landed right next to it! The bird quickly realized that the seal didn’t have any snacks for it and abruptly took off. A couple of minke whales were darting around and the pair of fin whales reappeared, and then disappeared just as quickly. We started to head north to a report of another whale about 10 miles away, but were soon waylaid by a pod of Atlantic white sided dolphins!  To our surprise, a fin whale was also hanging out with the dolphins so we finally got a decent view of a fin whale today!

I also want to give a shout out to our intern, Austin, who spotted most of the whales before the captain or crew did! Way to go, Austin!