The fog threatened to defeat us this morning but we rallied and showed it who was boss! Well, sort of. If only we could control the weather and Mother Nature! We found an ocean sunfish (Mola mola) close to shore and got great looks at this odd-looking creature.

Then we found an elusive pod of a dozen Atlantic white sided dolphins.

Next was a minke whale, and then another!

Suddenly we saw a few blows ahead of us. This turned out to be a trio of fin whales! Seeing one of the 2nd largest animals on the planet is always amazing, but to have 3 of them together was extra awesome! One of the whales was #0354. Still working to verify the other two.

On our way home we passed a couple more minke whales and a pod of harbor porpoises!

This afternoon took us further south. By this time, the wind had blown the fog away and we found another pod of harbor porpoises before seeing the humpback whale named Hornbill!  A minke was in the area too but we tried to keep tabs on Hornbill. Hornbill was being typical Hornbill- only fluking every other dive!
We then ventured on and passed another minke whale and then found a pair of humpback whales! These were Nine and Milkyway, yet again! This dynamic duo has been together for 3 weeks now!

Normally, humpbacks are solitary, only forming groups from time to time, and usually only for a short time. Interesting to see these 2 ladies spending so much time together! 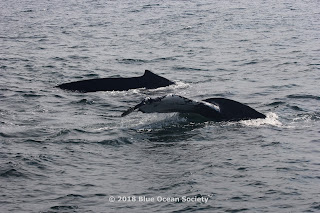