We were a bit hesitant to venture out today after hearing that two whale watching boats from a nearby port turned back due to rough seas. What a difference an hour can make! We left the harbor to some really nice sea conditions in spite of the NE wind (which quickly died out). Our trip ended with nearly no wind at all, and pretty calm seas.

We passed by some harbor porpoises on our way out of the harbor, and then saw the first of 5 ocean sunfish throughout the trip. 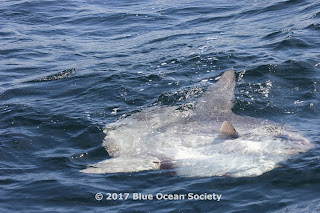 Fin whales were the stars of the day- at least 6 were spotted and we were thrilled to get close looks at a pair of them that repeatedly surfaced close to us. 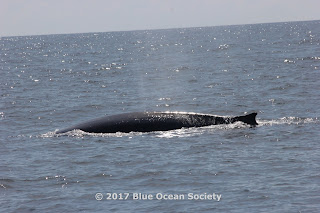 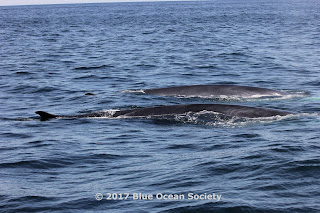 Bluefin tuna, possible a handful of dolphins and even a harbor seal were also seen on our wildlife excursion!
All that while we were keeping a close eye on Hurricane Irma in Florida and thinking about all of our friends, family and colleagues enduring the storm today. Be safe, Floridians!
Posted by Dianna Schulte, Blue Ocean Society Director of Research at 7:30 PM