This morning, we found a huge pod of about 200 Atlantic white sided dolphins!  These animals have been around the past few days but typically, we only see them on 20% of our whale watching trips! This was a pretty active group, too. They swam right alongside the boat, and we even saw several of them jump completely out of the water.  So much fun! 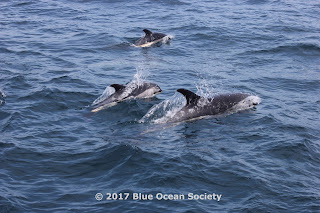 Then we spotted 3 minke whales  but these guys were less than cooperative for our purposes, so we continued on to where we found Hornbill, the humpback whale. Hornbill has been around a bit over the past few weeks. Today, he was his typical self, staying down for 8-13 minutes and surfacing a little ways away from us. Some days he is great. Other days he reminds us that he is a wild animal, capable of doing whatever he wants! 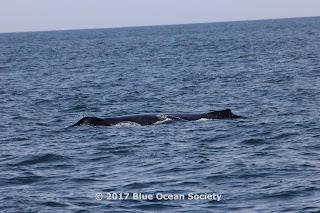 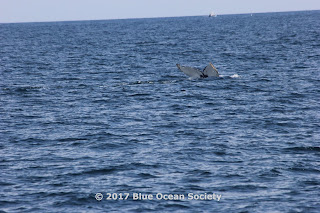 This afternoon, we had a huge surprise of seeing a minke whale immediately after leaving the harbor! Literally, this whale was only a couple hundred feet from the jetty. I have never seen a whale that close to shore!  We saw it for a second time, heading offshore, and we did the same.  Our friends on the Atlantic Queen had found a pair of fin whales so we went over to check them out. These turned out to be “Two-Scoops” and #0932.

Two- Scoops has been seen in the area previously this year, but #0932 was a new visitor! Great to see old friends!  We continued offshore and found a pod of Atlantic white sided dolphins. This pod was really spread out and apparently feeding (too busy to check us out) but we still managed some wonderful looks. 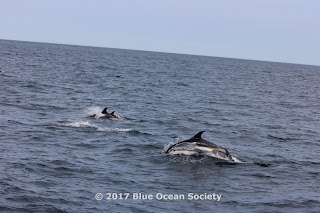 As we were getting ready to go home, another fin whale showed up! I’m still not sure who this whale was, but good to know of another big whale around.  Our trip home found a small group of harbor porpoises as well! All sorts of variety today!

The pelagic birds were fantastic as well. Northern gannets, Corys and great shearwaters, Wilson's storm petrels, common terns and even a few red-necked phalaropes were seen on both trips!
Posted by Dianna Schulte, Blue Ocean Society Director of Research at 8:29 PM