The wind was pretty much non-existent this morning, and for that matter just barely blowing this afternoon, providing another gorgeous day out on the water as we ventured towards Jeffreys Ledge today. This morning we had an unexpected surprise when we spotted a whale before even getting to Jeffreys Ledge. A Fin whale was moving around the area. A few time this whale even flicked its tail above the surface, probably beginning to roll on its side, as it made its way through the water today.﻿
Before leaving we even became aware as to who this was in the first place. Dingle the Fin whale was only miles from land!  This whale was first seen in 2003 and Blue Ocean Society affiliates have seen this whale almost every year since then here on Jeffreys Ledge! ﻿What a great way to start out the day with such a familiar fin so close to home.﻿

We next came across Satula the Humpback whale. Once again this whale was circling around the area, creating bubble clouds, and even a few more brown clouds at the surface for people to see. Whale poop is always fun to see at any time of the day!  ﻿
After spending most of our time watching this whale with the engine shut as it circled around us giving us the chance to listen to this whale exhale AND inhale (a sound that is amazing to hear if the opportunity arises!) and getting some incredible looks we eased our way out of the area to continue searching for more marine life.﻿

Our next sighting wasn't a whale, but instead a fish. It was an Ocean sunfish. We got some really nice looks as this critter swam along at the surface. What perfect conditions for checking out such an interesting looking creature!﻿
Before getting home we also spent some time with a Minke whale on the move. What a nice variety of life to see out on the ledge this morning.﻿

This afternoon we attempted to relocate Dingle but this whale appeared to have moved away from the area so we headed back towards where Satula had been this morning. On our way we ended up spending time with two Minke whales moving around. Both whales were swimming in big circles and showing up on either side of the boat for our passengers to see. ﻿
Satula wasn't too far away and seeing that the other whale watching boats had left the whale we decided to ease our way into the area and spend some time with this other species. Satula certainly did a great job giving everyone a good look at it. A few times this whale returned to the surface right next to the boat, surprising everyone for a moment! ﻿

Once again we were lucky enough to sit there with our engines shut off watching Satula create more bubble clouds and swim circles around us.

Thanks to Satula for allowing for some incredible looks at this whale today as we sat floating on ocean watching in awe the ease in which these animals move through the water. And of course to all the other marine life seen today for it was another good day on Jeffreys Ledge indeed! 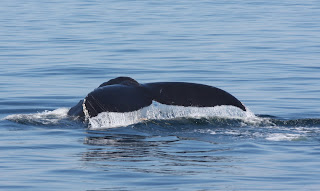