We started the day offshore close to Jeffrey's Ledge where several whales have been feeding over the last couple of days.  We were lucky enought to start with not one, but two Fin whales! One of the fin whales looked much smaller than the other and we soon realized that we had a mother, calf pair. 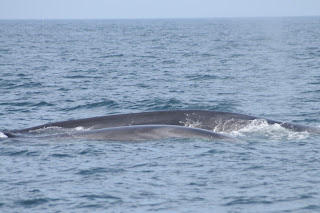 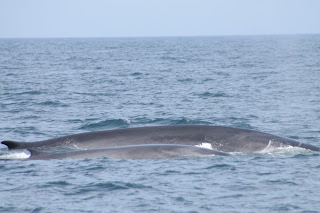 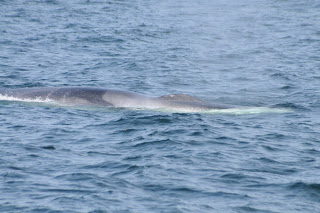 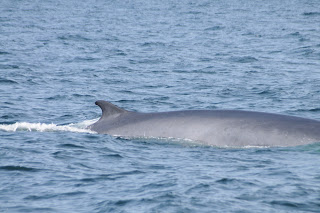 We spent quality time with this pair and it is always so nice to see new life on the ledge.  As we were watching the pair, a third fin whale surfaced right next to us! It turned out to be Dingle.  Dingle surfaced 2 times then disappeaered underneath the water and continued traveling.  Even though it was for a short period of time, it was so nice to see Dingle again.

Before long, we were surrounded by about 7 different fin whales and we were able to get great looks at 5 of them throughout the morning.

We ended our morning trip with a different species  on the ledge.  We found a juvenile Humpback whale.  This whale was taking long dives, but we were able to get great looks at this whale and it's another new humpback whale to the ledge this season.  We are still in the process of trying to identify this whale and will keep you posted once we get a positive ID. 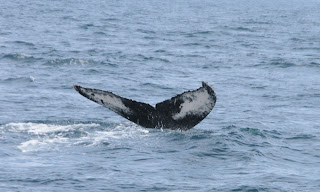 We travelled to the same area in the afternoon in hopes that we would have luck in finding a few whales that may have stuck around.  Whales are constantly moving to different areas to feed, but we were hopeful that we would be able to relocate a few whales perhaps that we're seen in the morning.
Our first stop was slightly inshore of the ledge with a single adult fin whale.  this whale has a small notch in the tip of the dorsal fin and prominent peduncle scars, and we were able to identify it as #9724!  This whale was first sighted by the Blue Ocean Society in 1997 and we were so happy to see this whale once again. 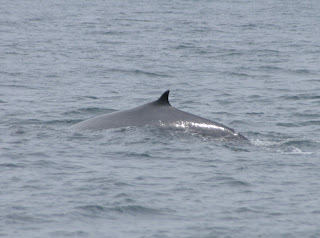 We then travelled to an area where we found the same mother, calf fin whale pair from the morning trip!  This afternoon however, the calf  was quite active rolling around perhaps learning feeding behaviors from mom! 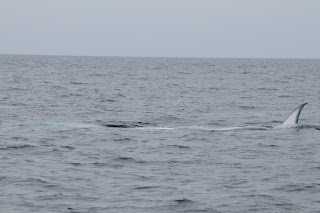 The pair were accompanied by a third individual and it was such a spectacular sight to see 3 of the second largest animal in the world close by.

As we were watching the trio of fin whales, we got a report from our friends on the Prince of Whales that they had found a humpback whale.  We waited for the trio of fin whales to resurface to get a last looks at them before trying to relocate the humpback whale that was a couple miles away from our location.   As we started slowly moving away the captain noticed something else along the surface.  What he first thought was an ocean sunfish, turned out to be a Leatherback turtle!! Yep, a turtle!  It is a rare sighting, but what was more shocking was that it surfaced several times right next to the boat!  To actually get a good look at one from a boat is very difficult, and this was by far one of the highlights of the day.  In my thirteen years of whale research, I have never seen a leatherback turtle in the wild!!  A fantastic sighting for everyone aboard!! 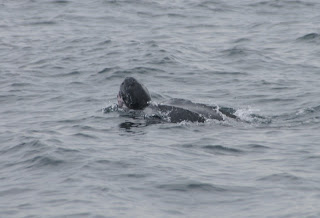 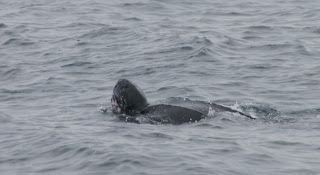 We ended our day with the same juvenile Humpback whale seen earlier in the day.  This whale created a few bubble clouds to corral food and was busy feeding! 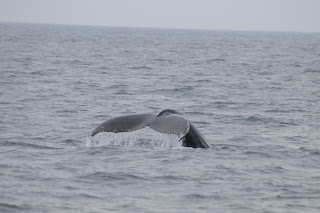 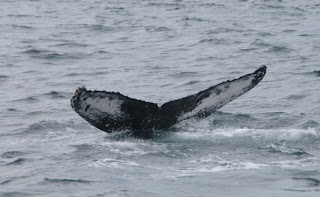 It was a fabulous day overall and we look forward to what tomorrow may bring!
Posted by Beth Bentley - BOS Research Associate - Granite State Whale Watch Naturalist at 12:34 PM