We had perfect conditions for whale watching today, with clear skies and calm seas, we left Rye harbor in search of whales.We started in a deep water area of Jeffrey's Ledge, where whales had been spotted the day before.  We decided to try our luck there again knowing full well there was no guarantee of finding whales in the same area.  Our frost encounter was with an adult fin whale, that was taking 5 minute dives, and we were able to get great looks at this individual along both sides of the boat.  As we were waiting for the fin whale to resurface for one last sequence of looks our passengers started pointing at something in the water...I quickly looked to the right side and at first, we didn't know what it was.  It lifted it's head out of the water and we realized we had another Leatherback turtle.  It was one week ago that we saw our first one of the season and this one was much larger!  But before I could get my camera it disappeared shortly thereafter and never returned back to the surface.  With 2 sightings of Leatherbacks and 1 sighting of a Loggerhead turtle last week, the ledge is continuing to keep us on our toes. 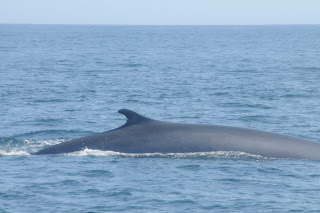 Shortly after seeing the turtle and getting last looks at our fin whale, the captain saw splashing in the distance from where our fin whale was and we thought maybe it could be dolphins, some decided to explore that area a little closer...and I'm glad we did! We found a nice pod of Atlntic white sided dolphins, about 40 of them. With clam seas and great visibility, we were able to get great views as the dolphins coasted along each side of the boat, underneath the water.  There were even a few calves within this pod and it's always so nice to see baby dolphins. 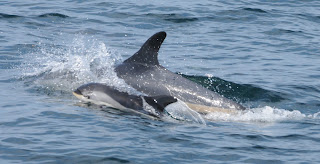 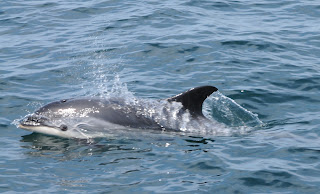 Our morning trip ended with 2 other adult Fin whales that we're swimming independent of each other, but we were able to identify one of them as #0821, a whale first seen on the ledge in 2008! 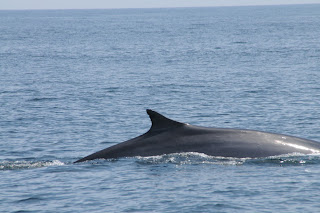 It was a beautiful ride in back to rye harbor and we were anxious to see what the afternoon had in store... 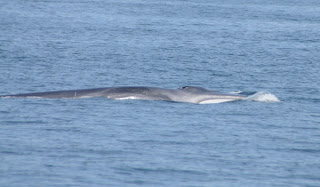 During the afternoon we headed to a more northeastern area of Jeffrey's ledge and started with a very cooperative Minke whale about 10 miles from the harbor.  One minke whale quickly turned into 4multiple minke whales and before long we had 4 different minke whales surrounding the boat.  It was such a great way to start our afternoon trip. 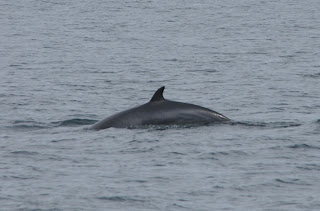 After traveling for quite some time offshore, we were all getting anxious as to what else we might encounter during our trip.  I then noticed a few passengers on the bow pointing down in the water right next to the boat, so we slowed down and looked down in the water.  To our surprise there was a very large Basking shark traveling close to the surface.  Eventhough we didn't see it for long, it gave our passengers an idea as to how large this shark truely was! Being the second largest shark species in the world, it was a great sight to see being shark week and all!

While spending time with the Minke whales, we also had a great view of Boone Island Light, the Tallest lighthouse in Maine, standing 133 feet above sea level. 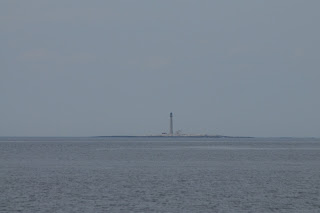 After sighting the shark, we found an adult fin whale to spend some time with.  We are still in the process of identifying this whale, but there is alinear scar in front f the dorsal fin that should help us getting a positive ID. 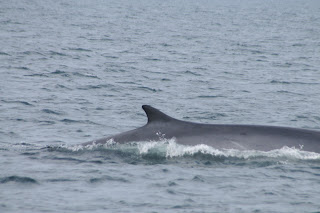 We finished our trip with another adult fin whale that we were able to identify as #0932.  This whale gave us great looks and overall it was a great way to end our trip. 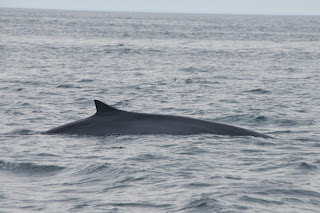 What a nice afternoon to see the second largest shark and second largest whale/ animal in the world!   Big thank you to all our passengers who joined us today and with all the variety on the ledge, I wonder what tomorrow will have in store?