No matter what trip you were on today the marine life on Jeffreys Ledge was pretty much absolutely stellar.  This morning we ended up with a grand slam of whale species.  Lots of Minke whales, 4 Fin whales, Crystal the Humpback whale, and a pod of 75 Atlantic white-sided dolphins topped the list of whale activity.  Our first stop of the day was a result of lots of splashing in the distance.  A group of dolphins were not far from home!  These whales were great as they spent so much time under the pulpit, around the boat, and in our wake, allowing for awesome looks in every direction!
Once we finally left our great group of whales we set our sights on a few Minke whales we were seeing not too far away.  Little did we know the more time we spent in the area the more whales that began to appear.  Amongst all the Minke whales seen this morning (more than 10!) we spent time with Fin whale #0622.
While this whale was on the move we did get a few great looks as this animal stopped to circle a few times before pressing on once again through the area.
With some nice looks at everything we began to make our way further offshore when once again we stopped short.  An enormous Basking shark was swimming along.  This fish was HUGE.  We haven't seen Basking sharks in a good month so we were excited to spot this one that swam straight in towards the boat before continuing to swim just under the surface.  What a fantastic look at this massive creature. Eventually we made our way out towards Jeffreys Ledge as all this activity had us still very much inshore!

Once on the ledge we came into an area where we've been seeing whales recently and suddenly more whale spouts started to appear.  Whether the same whales we still around or not, animals were still near by!  As we eased our way into the area we saw 3 more Fin whales and 1 Humpback whale.  The Fin whales were being a bit sporadic and having not gotten the chance yet to see a Humpback whale we made our way over to this particular species.  Instantly we knew who we were watching.  Crystal was surfacing in extremely tight circles.  Not only was this whale doing some feeding, as indicated by the remnants of bubble clouds rising to the surface, this whale was also leaving behind brown clouds!  Whale poop was dissipating on the surface almost every time this whale was at the surface.  Bubble clouds and whale defecation... all great signs of lots of whale food in the area!

This afternoon we headed out towards the Ledge where we had seen so much whale acitivty only to find just one thing had remained the same.  The crazy amounts of food we were picking up on our fish finder was insane.  Large patches of bait were everywhere and while we saw none of the same whales we had spotted in the morning there was still plenty to look at.  We first started with a single Fin whale which turned into two as well as 3 Minke whales darting around the area.  Whales surfaced on the left, right, front, and back, making everyone's head turn in the best way possible!
Whales were popping up everywhere.  After going in circles we made our way a bit further offshore only to be once again encompassed by whale activity.  More Minke whales and more Fin whales were around.  We ended up watching a mother/calf pair of Fin whales as they moved through the water, making sharp turns constantly.
We even got fooled by a few more Fin whales in the ares as they passed on by before making our way back to the pair we were originally watching.  Mom even lunged through the surface once as she was seen on her side, with her flipper high in the air, capturing and catching lots of food in its mouth!

As we headed for home we made a slight diversion as we came across another pod of Atlantic white-sided dolphins!  This group consisted of 100 individuals including lots of young whales moving through the water.  As they travelled into the waves they provided an incredible look as they jumped and charged their way through the ocean.  What an incredible way to end an already incredible day. 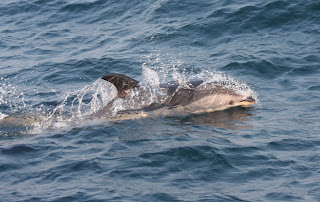 Many thanks to our returning friends, family, and new acquaintances that joined us today.  Both trips were so fantastic in their owns ways that I hope it was nearly impossible not to enjoy time spent with the life out on Jeffreys Ledge today!