The weather simply does not get any better than it was for our morning adventure out to Jeffrey's Ledge.

Flat calm seas and clear blue skies made for great whale spotting conditions.  We started a little inshore of the ledge with a couple of Minke whales that were swimming close by the boat. Minke whales are the smallest of the baleen whales in our study area, but they still have average lengths of about 20 feet long and are much larger than us humans.  As they swam around us, they gave us an idea as to just how small we are in comparison to everything we see out on the open ocean. 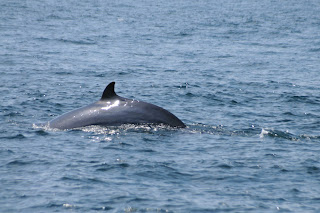 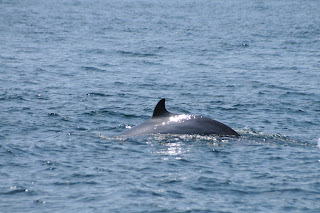 Once we decided to continue offshore, we spotted a spout a couple of miles ahead of where we were.  When we got closer to where the whale was, it went down on a deep dive and we realized that we had a very large Fin whale in our area.    On average, fin whales will stay underneath the water anywhere from 2-10 minute dive intervals before returning to the surface to take a few breaths along the surface.  On occasion if they are migrating to different areas to feed, they will hold their breath for a little longer to maximize their travels.  When this fin whale did resurface, it had been down for over 14 minutes and had travelled about 1.5 miles away.  before we were able to get closer, the fin whale had gone on another deep dive, so we decided  to continue exploring other areas, where that whale had traveling on its mind.

In total for the morning we ended up with 9 minke whales, 2 harbor seals, 1 quick look at a Loggerhead turtle, and 1 fin whale.

As we headed offshore for our afternoon trip, the weather continued to be perfect and our sightings actually started even before the Isles of Shoals.  We found 2 Minke whales very close to shore and I'm happy to report that we found a minke whale that we have seen earlier this season.   This particular whale actually does not have a dorsal fin anymore.   This whale sustained some type of injury from an unfortunate human interaction, but has survived to tell it's story.  You can even see where the wound is healing with white areas surrounding a pink flesh area in the center.  It was such a treat to see this whale again. 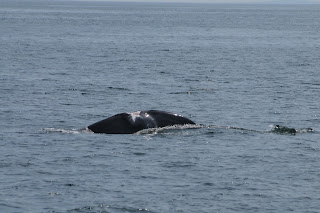 As we continued past the Isles of Shoals and towards Jeffrey's ledge, we encounter 2 small pods of Atlantic white sided dolphins.  We had excellent conditions for dolphins and what a nice group it was.  While watching the dolphins, we received a radio call from our friends from the Prince of Whales, that they had found a couple of Fin whales along with a single adult Humpback whale about 6 miles from our present location.  We spent a few more minutes with the dolphins, then decided to head south to see if we could relocate any of the whales they had spent time with. 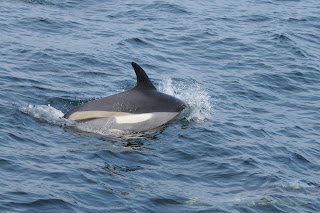 As we approached the area, we saw a small amount of spashing in the distance and thought that was where the humpback whale may be and continued on...then, out of no where we saw a very large splash off our left side in the distance.  The big splash was from a big whale coming clear out of the water.  With that, we headed towards to big splash, but wondered what the other disturbance was.  As we approached the area and slowed the boat down, the humpback whale surfaced right next to the boat off our right side.  It wasn't long before we realized who we had in the area.  We had found a whale named Ebony, an adult female who has brought at least 10 calves to Jeffrey's Ledge in the past. 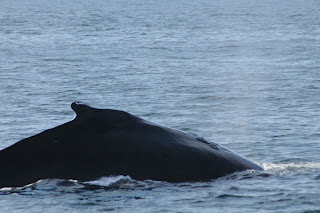 ﻿While watching her, we did see a few fin whales in the area, but we didn't have a lot of time left to spend off shore and decided to spend quality time with Ebony.  She does not have a calf this year,  but she gave all our passengers such great looks and it was a perfect way to end our afternoon and our day overall.
Posted by Beth Bentley - BOS Research Associate - Granite State Whale Watch Naturalist at 4:26 PM