The ocean remained just picture-perfect all day today allowing for us not only to see well out towards the horizon for whale spouts but also giving all of us the opportunity to enjoy any marine life we saw today even if they remained just below the water's edge!

This morning our first stop was on a few Minke whales.  We ended up counting four different Minke whales in one area.  They were everywhere!
As these whales continued to circle around we got some great looks before heading towards Jeffreys Ledge.  Our next stop was on a few more whales but slightly larger than our Minke whales we had seen.  We had two Humpback whales swimming around together.

One look at one these two whales, even with just seeing their dorsal fins, we knew exactly who we were near.  Not only was Crystal still around and in a different section of Jeffreys Ledge than recently sighted, this whale was now associated with Clipper!
If you have ever been privy enough to spend time with Clipper you know this particular Humpback whale is one incredibly large whale.  Her (yep, this whale has had many calves over her lifetime) overall girth is just enormous especially when in the vicinity of another Humpback whale.  Not only was this the first time we have seen her this year but she is definitely a favorite amongst the crew and were thrilled to have her, and of course Crystal, still spending time on Jeffreys Ledge! We did also get a few very quick looks at 3 Fin whales as we traveled around this morning but all were being a bit "shy," coming up for a few breaths, before disappearing below the waterline.  More Minke whale sightings on our ride home wrapped up a very nice morning trip!

This afternoon, with the weather continuing to be spectacular, we decided to really press our luck.  Reports of whales had been mentioned further south heading north.  If that held true we knew we could make our way to some other animals and check out exactly which whales were on the move.  Unfortunately as we ventured off in hopes of intersecting the reported animals, we learned those whales had all turned around. Now the whales were swimming south; further away from us...  We were already pretty much committed to heading in this particular direction so we pressed on.  Our extremely patient passengers sprang to excitement when we finally began to spot whales.  The more time we spent in the area the more spouts we were seeing.  After passing by lots of Harbor porpoise, Harbor seals, and even a few Minkes (we wanted to give ourselves as much time as possible where the whales had been reported to spend time with them), the wait had been worth it.  10 Humpback whales were seen including many of which we've seen this season and even a few newcomers: Valley, Nile, Tripod, Chromosome, Draco, Palindrome, Geometry, and Doric were our identified animals.  Most whales were in pairs while the rest of them circled the area as we were all constantly looking left and right as whales surfaced in every which direction.  Below are just a few of the many whales seen during the trip!

Of course within all the chaos of the whales there was also another marine creature... A Leatherback turtle was at the surface!!!  Even though this reptile was only above the surface for a brief moment it was an incredible unexpected find!  AWESOME.

The day finished with just one more type of marine life.  An Ocean sunfish was "lazily" swimming at the surface as we all got a great look at this interesting looking fish! 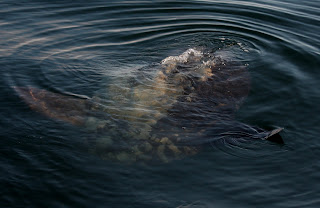 Many thanks to all who joined us today as we spent some incredible time with all sorts of marine life out in the open ocean today.  While we typically avoid travelling more than 30+ miles to find whales every now and then we get a bit adventuresome in our own way and give ourselves a bit of nervous anticipation, something probably many of you feel when you go out in search of wild animals.  Sometimes the effort pays off and sometimes we come up short but we certainly enjoy being out on the water looking at everything we can look at before we run out of too much time!