Sorry for the delay in posting this week! It has been pretty hectic with two of our interns leaving this week to go back to school as well as getting all of the interns ready for the big research symposium at which they all presented their research projects! I'm very proud of this group of interns! Anyway, here are the updates from this past weeks' whale watches.

Tuesday morning, we found the humpback whale featured on our brochure cover, Patches! He was taking dives of varying times 3-8 minutes. 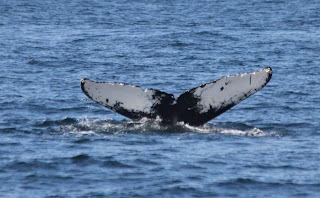 During one dive, we noticed a little fin waving back and forth. This was an ocean sunfish nearby! We scooted over to check it out and then went back to see Patches again before moving on. We found two minke whales before heading back to the dock. 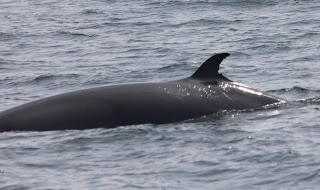 Tuesday afternoon, we headed out past the Isles of Shoals, prepared for a long(ish) trip to the southern end of Jeffreys Ledge, off Cape Ann, MA. As we headed past the Isles of Shoals, we saw an occasional harbor porpoise in the distance. Then, we saw some splashing ahead – Atlantic white-sided dolphins!  We got great looks at these toothed whales. There were about 40 dolphins, with several calves swimming next to their moms. We were even lucky enough to see them leap in the air a few times! 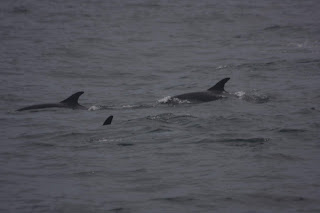 We continued on our way and started seeing some blows. Just off Cape Ann, we came upon Quote – a humpback whale we’re very familiar with, as we see her almost every year. We got a few looks at her distinctive tail markings before moving a bit further offshore. We saw a whale who we think was Dross, a whale first seen in 1997, and then came upon Pinball and her calf, who were traveling with another (unknown humpback).  Pinball breached right near the boat!  Soon after, we had another breach – we think this was a different humpback, but aren’t sure who it was.  We spent some time with the calf, who was swimming just off the bow and even flipper-slapped and rolled over a few times!  Our last looks were at a 6th humpback whale, Satula – we got great looks at his enormous fluke a couple times before we headed back to the harbor. 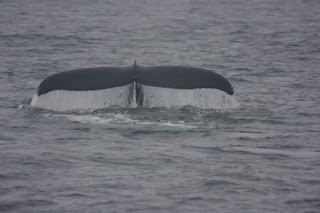 Wednesday morning we found Ravine and her calf! We love baby humpback whales, especially when they are playful and curious! While Ravine was on a dive, the calf surfaced right next to us and then tail-breached so close to us that some of our guests on board were splashed! Never thought we’d have to warn people about being in the “splash zone”.  The calf continued to tail-lob and roll at the surface. It seemed to be having a pretty good time while mom was away!

Eventually Ravine returned and the pair began to nurse. We took that opportunity to sneak away and look for another whale that was reported closer to shore. We eventually found it- it was another humpback whale named Dross. She was traveling and not lifting her tail much. Such different behaviors from what we had seen with the calf! (Photos to come soon!)

Wednesday afternoon and Thursday morning, we stayed at the dock and let Mother Nature do her thing and blow a bunch of wind around, stirring up the ocean and making for an uncomfortable whale watching adventure.

Thursday afternoon
It took a while to get where we needed to go, but we ended up with a spectacular trip.  Our first sighting was the humpback Zorro, who wasn’t spending much time at the surface. There would be a couple quick breaths, then a 5-6 minute dive. Eventually, we got a look closer to the boat but decided to move on because he wasn’t spending much time at the surface. We spotted a blow and went over to it, but never got a look at this baleen whale. But soon, we saw some splashing, and this turned out to be a large, widespread pod of about 125 Atlantic white-sided dolphins. They were very active – fluke-slapping, wiggling around, and even leaping from time to time!

We then saw some more blows and it turned out to be multiple humpback whales. These whales turned out to be several familiar whales – Pinball and her calf, Satula, and Hornbill!  Pinball and her calf weren’t always together, and all the whales were moving around quite a bit.  We ended up spending most of our time with Pinball’s calf, as it lolled at the surface, took a short catnap, and even did a couple “headstands,” where it surfaced tail first!  After spending lots of quality time with the whales, we headed back to the harbor.

Friday morning, we passed a harbor seal while heading out to Jeffreys Ledge. There we found Ravine and her calf again. This time they were pretty mellow and just swimming slowly at the surface. Ravine rolled on her side briefly, showing us her big flipper. 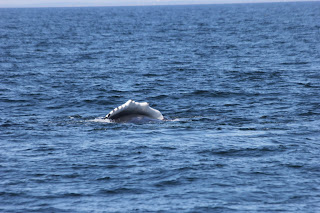 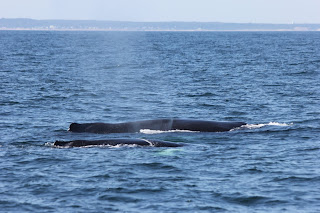 On our way home, we got a report of another humpback whale about 6 miles from the harbor. We found Zorro who was traveling to the south. 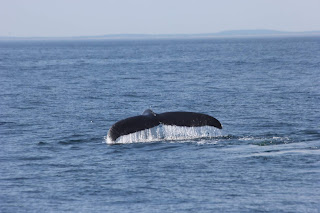 Friday afternoon, we headed out passing by a few pods of harbor porpoises and an ocean sunfish. We saw splashing and turned that way. A big pod of about 200 Atlantic white sided dolphins were charging around while northern gannets and gulls were swooping down, all trying to catch some little fish! It was a great show and the dolphins certainly didn’t disappoint. 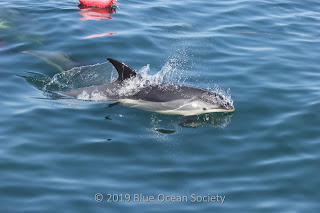 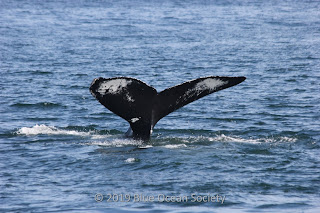 Our first humpback whale was our adoptable whale, Satula!

He had most certainly been doing some feeding as evidenced by the bubble clouds he was blowing to corral his prey, and also by the lovely “brown cloud” left behind at the surface. We call that “nutrient recycling”!  A minke or 2 were also in the area circling around Satula. We then saw Quote and Patches together. 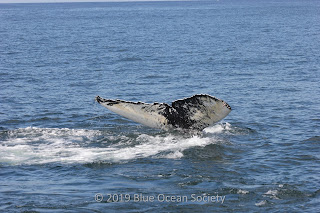 One of them would blow a  bubble cloud and then both came charging up through! It was quite the scene! They then splint up but later got back together. Dross was also around and feeding although she was blowing a bubble net- a ring of bubbles also used to concentrate the bait fish. 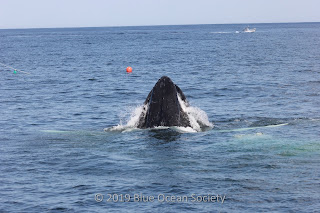 On our way home, one of our sharp-eyed guests spotted a basking shark! We thought it couldn’t be a basking shark because the water is 10 degrees warmer then they usually prefer. But it was most certainly a big basking shark! It was very mellow and stayed up at the surface as we circled around it, giving everyone a great view of this 2nd largest shark species!  We then passed by a grey seal and a harbor seal before heading to the dock. 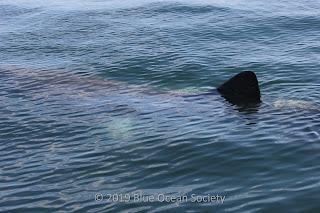