As August winds down, we too start to shift our schedule, now running single trips during the workweek this week. On Monday, we made our way to where whales have been scooting around. And there they were, continuing to scoot around. A personal highlight was only a few miles after leaving the harbor, even though it was such a brief look. A certain minke whale personally referred to as 'Finke,' showed itself! The Granite State has been seeing this specific whale since 2011. Today was our first sighting of this whale this season! 'Finke' refers to the fact that this minke whale is missing its dorsal fin, instead replaced with a scar. Finless minke = Finke. As per typical sightings of this whale, one minute it was there and the next, gone. Even after waiting patiently for the second sighting of this whale, it did not happen, but what a special surprise to start the day. Once offshore, we found a total of 11 humpback whales. As has been the regular recently, whales were sighted singularly and in small groups with IDed whales including Patches, Tripod, Quill, Pixar, Pinball, Gunslinger, Palindrome, Valley, Sword, and Jawa.

Sprinkle in a small group of Atlantic white-sided dolphins and what a day.

The ocean had minimal wind or wave effects on Tuesday providing ideal conditions for spotting marine life. Plenty of harbor porpoise were seen, along with two ocean sunfish, as we headed out towards Jeffreys Ledge. We spent the trip with six different humpback whales. Most of them were being quite mellow. Just think to yourself, how often are you active/rambunctious during the day? Some days are made for being mellow. When you are a 25+ ton whale, you do what you want! While a few more spouts were out in the distance, we spent time with Shuffleboard, Patches, Decimal, Doric, Gunslinger, and Frost. Though it was Decimal and Doric that abruptly livened things up. Suddenly tail breaching, lobtailing, and flipper-slapping were the norm. What a fortunate experience to witness and a phenomenal way to end the trip. 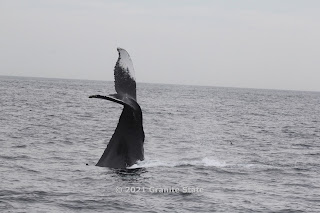