The past couple of days have been long rides to where the whales have been most prominent.  But the trek has been well worth it! Even when we have started out in foggy conditions, the fog miraculously lifted just in time for us to see blows from whales in all directions.  On Thursday morning, we found Atlantic white sided dolphins to start the trip. Then we began seeing blows from humpback whales not far away!  Most of the humpbacks we identified were adult males including the brothers Slingshot and Sword! 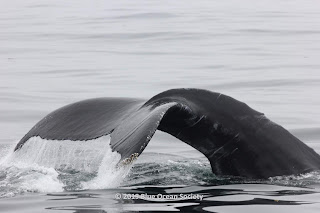 As we were just about to leave the humpbacks to start home, the dolphins surprised us and showed up with the humpbacks for some lovely last looks!

Thursday afternoon’s trip was similar to the morning trip in that we saw Atlantic white sided dolphins and humpbacks, however some of the individual humpbacks that we identified were different! 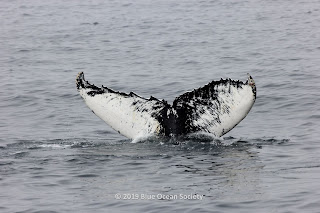 There are certainly a lot of whales in this neck of the woods! The dolphins showed up at the end of our time with the humpbacks and even briefly associated with Sword. 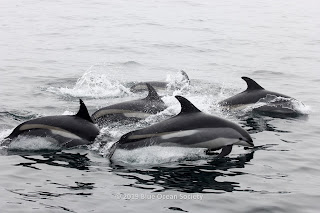 At one point, a dolphin even leaped right over the nose of Sword as he was coming up for a breath! The fog began to roll back in so we knew it was time to go home.

Friday morning was glassy calf. We spotted the fin of an ocean sunfish, and after a bit of searching, were able to get close to it so everyone could get a good look at this unique-looking animal. A couple of seals and a couple of harbor porpoises were also easy to see in the calm ocean. Then we got to the area where the big whales have been hanging out. This time, our sightings of humpback whales were dominated by adult females! 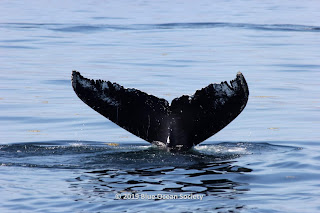 Valley and Bayou were together, and then we saw Fan and Quote together.  We even got a look at a huge fin whale cruising through the area! 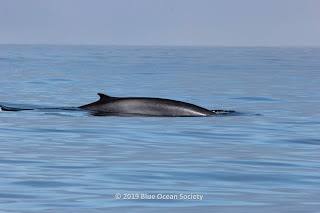 Off in the distance, we could see a whale breaching, and another whale flipper slapping. They were pretty far away. Someone asked if I got a photo of the breach. Yes! Here it is! ;) 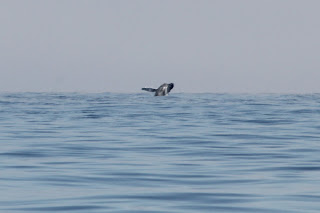 Friday afternoon, humpbacks ruled the sightings yet again. We identified at least 9 individuals, all of which were not seen on the past 3 trips! Tripod and Chromosome were together, which was really interesting. In 2009, this pair was seen together 18 times over the course of a month and a half. These long term associations are really rare.

On our start for home, we saw another pair of humpbacks. We didn’t have much time to investigate since we had a lighthouse cruise scheduled for the evening, but we stayed just long enough to identify these as Pinball and her frisky calf!  We haven’t seen that pair in nearly a month so we were psyched to see them again today!