On Monday morning the weather was pristine. At times there was not a breath of air. We saw three fin whales, six minke whales and a few seals.
The fin whales were that much more impressive to watch slipping through the water with barely a disturbance at the surface.
It was even lunchtime for a grey seal!
On Monday afternoon, we saw three fin whales again but all three were different from our morning ones! A pair of fin whales were on the move and it did not take long to identify one of those whales as Comet!
Additionally, a humpback whale made an appearance followed by another fin whale on our travels home. 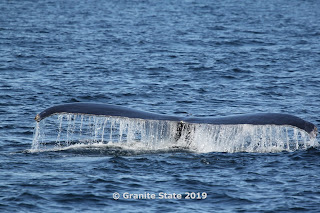 On Tuesday, the wind was minimal again. On our morning trip, even with having to skirt around some fog, we saw five fin whales and four minke whales. Our first sighting was only a few miles offshore and included a pair of fin whales. Ocean conditions were just beautiful for whale watching.
During the afternoon, the fog held back and marine life popped up everywhere! We started with a RARE sighting of a white-beaked dolphin. What a way to start a trip.
Offshore we saw two fin whales, at least 10 minke whales, an elusive humpback whale, blue fin tuna, a large basking shark and a grey seal busy having an afternoon snack!
Wednesday brought its own surprises. BIRD ALERT: We had our first shearwaters of the season. Two great shearwaters were spotted this morning. We were in varying degrees of fog all day sometimes thick-thick, sometimes disappearing all together. Of course fog doesn't stop us from searching from the moment we leave the dock until the moment we return! On our morning trip we saw six minke whales, a fin whale and a brief glimpse of a basking shark.

At one point our fin whale swam directly past the boat and our passengers got an incredible look at the sleekness and massive size of these creatures. This afternoon, we saw two minke whales and a fin whale.
The fin whale was doing some traveling but it was one of our minke whales that stole the show. Out of nowhere one breached right next to the boat! And thanks to our Blue Ocean Society summer interns, Erin and Hannah, we know this minke whale breached 10 more times!! 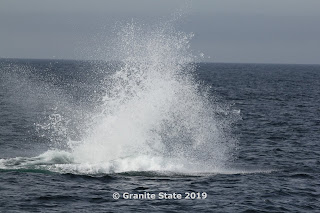 But the action wasn't over yet. After all the repeated aerial activity, and charging through the water, this whale became extremely curious. Our minke whale swam circles around us, checking out every angle of us, whether right side up, on its side, or upside down! What an incredible experience.