It is starting to feel like autumn whale watching! Sightings are more unpredictable, but not in a bad way at all! We love the surprise of seeing new whales, larger dolphin pods and who knows what else!   This morning we passed by some harbor porpoises before spotting a big pod of curious Atlantic white sided dolphins. 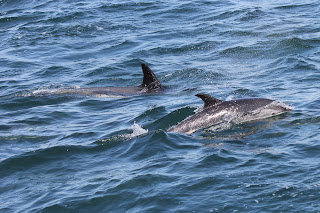 Then we saw a blow from a humpback whale nearby. This was Jabiru, a familiar favorite of mine. As we waited for Jabiru to reappear, a harbor seal and ocean sunfish came up close to us! We spent some time with the ocean sunfish before catching up with Jabiru. 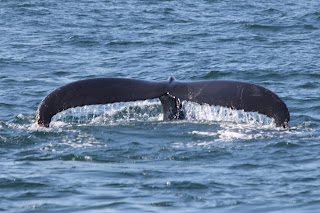 Next we found another humpback whale named Fulcrum. She has a serious injury to her dorsal fin, caused by the propeller of a boat. The injury is over 10 years old and she is doing great, producing several calves in the past decade. 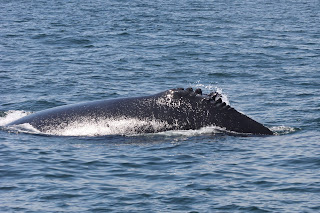 Today was our first sighting of her here near Jeffreys all season. A few minke whales were seen near and far, and then we saw a couple of big splashes in the distance.  A breaching whale! We always hope to see a whale jumping out of the ocean but in reality, it is a rare occurrence.  Today we lucked out! Humpback whale Victim’s calf was very active, jumping, rolling, flipper slapping and tail-breaching! 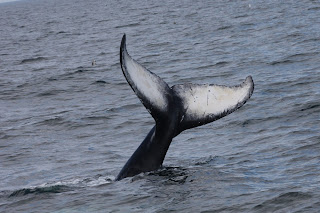 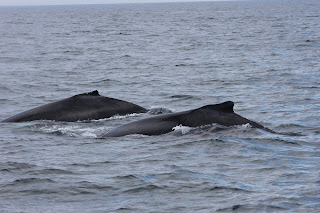 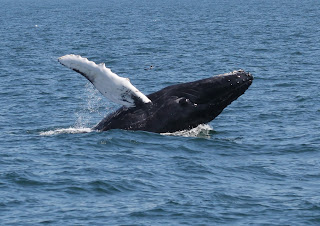 Although it took us nearly the entire sighting to confirm Victim's identity, thankfully we have a crew of whale experts who made this possible! 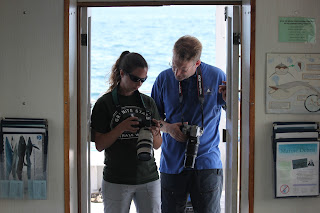 Then the pair settled down and just hang out alongside us. Absolutely beautiful!  Today was our first sighting of Victim this season as well. Our last sighting of her in our area was last October, when she appeared quite large- apparently pregnant!  What a great surprise!
Posted by Dianna Schulte, Blue Ocean Society Director of Research at 5:18 PM